How goes my experiments?

I tried out a few new things this month, so now with September looming, it seems like a good time to log in a status report. 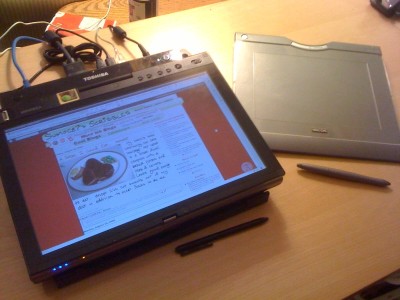 Added a Tablet to My Tablet: As I mentioned when I first blogged this, I should have  added a Graphire Wireless to my  peripheral arsenal  a long time ago. It’s been perfect for navigating around Hulu and Netflix while sitting on the couch (with my Tablet PC docked on the desk, as seen here).

I’ve also started using it as a mouse alternative. It lets me use my tablet in laptop mode without relying on “gorilla arm” for pen input. Not quite as easy as using the pen straight on the screen in slate mode, but it’s pretty comfortable. The small size keeps every part of the screen within reach, and my ritePen macros save me from menus. Haven’t started using it at work yet, but that’s still on the agenda.

iPhone OS 3.0’s reappearing email parlor trick: Been ten days and the emails I zombified are still showing up in the Spotlight search and linger in a state of undeath in that mysterious “Local Mailboxes” folder. They are, however, the only ones that still show up after being deleted. As long as I don’t do a search immediately after deleting an email, they seem to disappear just fine after being deleted. Conclusion: the reappearing trick is a self-fulfilling one. The search right after the delete keeps the email from moving on to the afterlife, trapping it in its zombie state. Still a bug, but one that needs to be intentionally triggered. 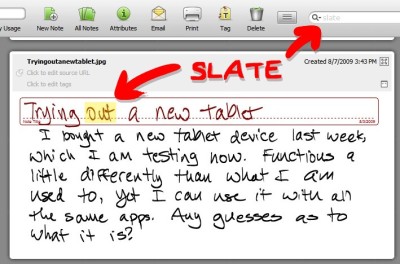 Why I’m now an Evernote Premium user: This has been working great but not perfectly. My photos are syncing with Evernote as I load them to my PC, as are my ink blog entries as I save them. The only problem with that is it grabs every file as they show up, even the temp files, and there doesn’t seem to be a way to exclude them. Not a deal-breaker, but I’d like to see file exclusion in a future update.

Since I’ve loaded so much into Evernote, searchability has proven invaluable. I’m pleased the indexing and OCR occurs on the Evernote servers, saving my PC from that processing job. The search results, though not perfect, are pretty good. The approach seems to be “broad net”, grabbing multiple possibilities instead of honing in on just one. In this case, a search for “slate” pulled up a sloppily written “out”. It also occasionally finds words in photos that don’t exist, but as long as it finds what I want, a few extra though inaccurate hits don’t hurt. Still aiming to do a lot more with Evernote soon.