Oe of my favorite features on the iPhone 4S is the new personal assistant app. Siri, as it is known, will listen to my requests and help me accomplish a number of tasks.

While I was worried that I would quit using Siri after a couple of weeks with the iPhone 4S, that’s not the case. Instead of being a novelty, Siri is a huge timesaver for me. I know why you iPhone 4 owners want Siri so bad.

Even as I switch back and forth between Android and iPhone, I notice that I miss the ability to take care of common tasks by talking to my phone. So much so that I will need to try these Siri Android alternatives soon.

By now, you’ve seen how Apple expects you to use Siri in the Siri iPhone 4S commercial, shown below. These tasks represent how some people will use Siri, but keep reading for how I use Siri every day.

Scheduling appointments on any phone screen is a pain. Instead of wasting time trying to correctly tap out the correct times and type in attendees, I simply tell Siri to schedule a meeting. A task that would have taken a few minutes takes just seconds.

I use this feature every other day, sometimes more often depending on my schedule. I even use it over entering a meeting on google Calendar when I cam at my computer.

Just be careful, if you schedule a meeting with an attendee, they will be sent an invite. This is normally OK, but if I have been asked to take part in a meeting I don’t always want to send an invite for a meeting they have already scheduled.

To Remind Myself of Upcoming Tasks 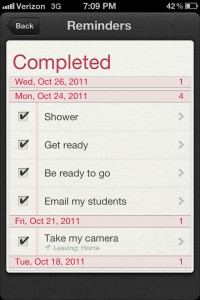 Reminders are another huge way I use Siri. I create two to three reminders a day. These are not long-term tracking tasks, just reminders to touch base with one of our writers, to get ahold of a contact or to simply remember that I need to take a break and eat lunch at some point during the day.

I would never take the time to type up these reminders, but speaking them makes it simple and easy. It helps that Siri is great at understanding what I say and when to remind me.

Setting up an alarm on the iPhone is tedious by touch, or at least it seems that way since I can tell Siri to set an alarm. No more tapping and scrolling to find the right time, just tell Siri when to wake me up and hours later I have an annoying beep on schedule.

While I get a bit annoyed when she tells me I already have an alarm for that time, and that she’ll turn it on, this is an excellent example of where voice beats touch.

In a small town, I have found that Siri doesn’t always do a great job of finding local businesses that are close by when I ask her to search a category, but if I ask for a specific business, I get pretty good results. She even handles odd names of small businesses pretty well.

I use this to look up phone numbers to check stock or make an appointment. I have also used to get directions to a new business if it is on a street I don’t recognize.

Again, asking Siri is faster than opening up Maps or Safari and trying to search. Surprisingly, I use it much more than I have used the voice search on Android.

To Send Texts and Tweets

I’ve never been able to use the Voice dictation tool in Android to send a text (too many mistakes), but Siri handles my dictation incredibly well. I don’t use this feature in public, or with others around, but when I am alone it is my preferred method of texting.

I showed you how to use Siri to update Twitter and Facebook, which is another way I use the text function. I mostly use it to post random updates to Twitter while I am in the car.

Here’s a demo of Siri from our iPhone 4S review:

(Read: How to Do More With Siri)

How do you use Siri to save time?