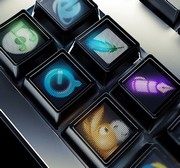 A lot of folks have been excited for quite some time about the Optimus Keyboard. It certainly has a coolness factor with every key being a stand alone display displaying what the key does. But up until now it has been one of those promises from afar (can you say vaporware.) Then word came that the cool colored display keys would only be black and white, and then there was some confusion on release dates (when and if) and now there comes word about the price. Try $1200. Ouch! As the Slashgear article says, that’s enough to make geeks squeal.

I guess the makers of the keyboard are aiming for the status market as the first batch of the elusive keyboards to be released on December 12 will be a limited number of 103. Odd? The next batch is scheduled for release in September 2007 and that batch will only set you back $1000.