Apple’s posted information on how you can buy the iPad 2 on the first day of availability. Apple will not be taking pre-orders for the iPad 2 as it has with other devices. Perhaps the reservation process was too much of a headache for both iPad buyers and Apple employees alike.

If you want an iPad 2 on March 11, the first day Apple begins selling it, you’ll have two options. According to Apple, you can simply order the iPad 2 from Apple.com/ipad and get free shipping. Or you can line up with a bunch of rowdy Apple fans at your local Apple store and wait until 5pm local time. 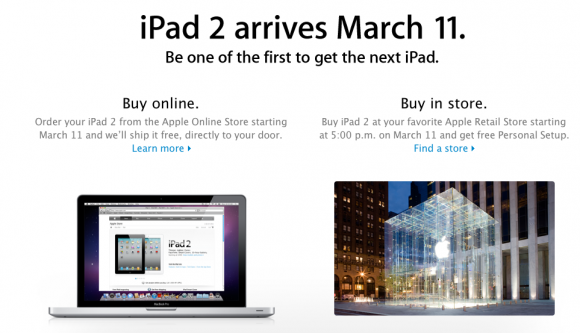 Apple’s notorious for not having enough gadgets in stock the day they launch, but your mileage will vary depending on your locale. While others camped out overnight in San Francisco and many other cities across the country to buy the original iPhone, I simply waltzed into my city’s flagship Apple store and forked over $599 after work. No line. When the original iPad was introduced I didn’t pre-plan my purchase, but found a stack of unreserved iPads at the Apple store in the mall near my house.

Apple faced severe shortages for months following the introduction of the iPad. Nobody could’ve predicted the onslaught of iPad purchases and hopefully Apple’s learned a thing or two since then. The company’s had plenty of time to estimate how much stock will be needed for the initial iPad 2 rollout.

Apple may also allow its retail partners to sell the iPad 2 on March 11, but we haven’t received official word on the matter. Even if that’s not the case, we expect the iPad 2 to pop up at AT&T, Verizon and Best Buy stores shortly.

My guess is that it won’t be too difficult to score an iPad 2 on March 11 if you plan a little. If Apple does happen to sell out, don’t fret too much.

There is one variable that may make it difficult to buy an iPad 2 on March 11. iPad scalpers will likely scoop up as many iPad 2 units as they can get their hands  on and sell them overseas. While the iPad 2 will go on sale in the U.S. March 11 and March 25 for a handful of countries.  The rest of the world will have to wait for months for the iPad 2 to arrive. Many overseas iPad 2 fans will be willing to pay a steep premium to be the first on their blocks to get an iPad 2. If Apple doesn’t limit the number of iPads an individual can purchase or restrict cash purchases as it did with the launch of the original iPad, this could become a big issue.