One feature that all Android smartphone owners use and probably love is the recent apps menu. One of the three standard buttons on most Android smartphones and tablets, which is also known as multitasking, or the app-switcher. On the new LG G3 this menu can be customized, and here we’ll explain how.

The recent apps option allows users to quickly and easily go from app to app with the push of a button. Simply tap the two rectangle’s overlapping button (bottom right on the LG G3 by default) and you’ll see a 3×3 grid of all your recently used apps.

While this is a nice way to show all your most recently opened and used apps, and a simple way to go from app to app, it has been completely changed from stock Android. Almost all smartphones and tablets have these shown in a vertical layout, and you can instantly swipe away apps to close them. However the G3 has a 3×3 grid and the system isn’t nearly as user friendly as before, so read on to learn how to change it. 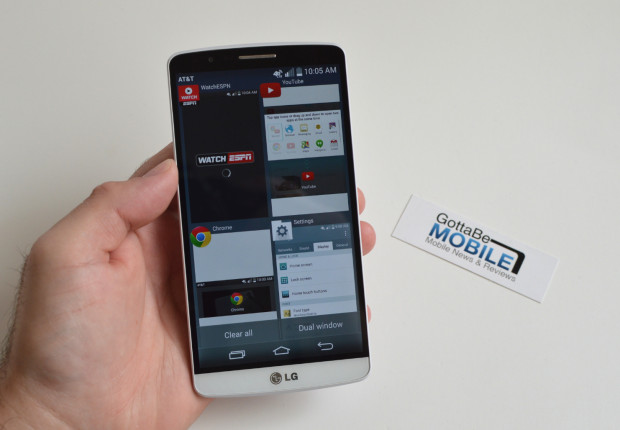 Most Android phones give you a single layout for the recent apps menu, but the LG G3 actually has three different views you can choose from. There is a popup on first use that you probably quickly ignored, but it explained that this task-switcher menu can be customized to your liking.

With the LG G3 the phone displays the last nine apps you’ve opened, and the most recent one is at the top left. Which for most, is the furthest away from your thumb while holding the device. This makes re-opening recent apps rather challenging on a large 5.5-inch display, but thankfully you can change it if you’d like. 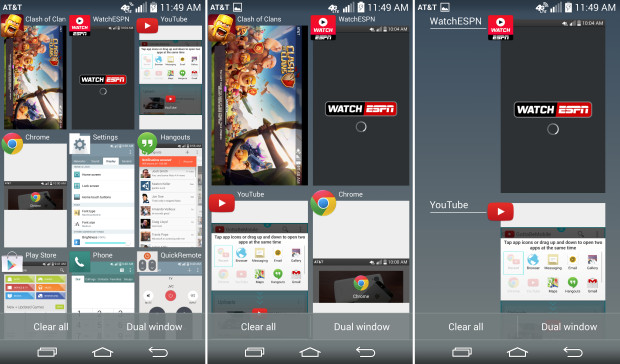 If the new 3×3 layout shown above isn’t something you like and you just want the recent apps button to display used apps similar to stock Android, or the way the LG G2 did, here we’ll explain how with a few quick screenshots and the video below.

It makes sense to have the most recently opened or used apps on the bottom to instantly access with your hand, but with the G3 they’re at the top and quite far away. Thankfully you can change the layout to offer a bigger, easier 2×2 grid, or even the traditional layout that most other Android phones and tablets employ.

You probably didn’t know that a quick pinch of your fingers, similar to pinch-to-zoom, and you’ll instantly change the multi-tasking menu to one of three different layouts. Check out our video below.

As you saw from the video above all it takes is a quick pinch of your fingers (slight pinch) and you’ll instantly change the multitasking or task-switcher menu from a 3×3 grid to a 2×2 grid, or even the standard vertical layout we’re all familiar with. Personally I like the stock Android look with large tiles, but some may enjoy the 3×3 grid employed here by LG.

Showing 9 apps seems like a bit much if you ask us, and the 2×2 or standard stock Android layout should suffice. That being said, everyone is different and to each his own. Hopefully one of the three different options and variants mentioned here will be right for you.

The new LG G3 is extremely customizable like many custom ROM’s, and allows for the user to change anything and everything. From the on-screen buttons and layout, on-screen button background color, and much more. LG does a fine job offering a lot of customization out of the box, and stay tuned right here for more LG G3 how to’s showing you everything that’s possible.