How to Check Data Usage on Samsung Galaxy Note 3

Anyone who’s used a smartphone and subscribes to a limited wireless data plan fears going over their monthly allotment, especially if the person shares data with a family or group of friends. That makes monitoring the use of data important. Thankfully the Samsung Galaxy Note 3 and some apps from the Google Play Store will help users keep track of their data, and stay under their cap, so they don’t open a surprisingly higher cell phone bill.

Checking Data Use in Settings on Samsung Galaxy Note 3

Let’s start by checking the data usage in Settings on the Note 3. Open Settings by sliding down from the top of the screen and tapping the Settings icon in the upper right corner. It looks like a round gear. On the Connections tab in Settings tap on Data Usage about two-thirds of the way down the screen.

There’s a box that turns on and off Mobile data at the top of the screen when that appears. Below it there’s an item that reads Set mobile data limit. To make sure you never go over a certain data cap, tap on that item to turn it on. A screen pops up to warn the user as follows:

Your mobile data connection will be turned off when the specified limit is reached.

Data usage is measured by your phone, and your service provider may account for usage differently, so consider using a conservative limit. 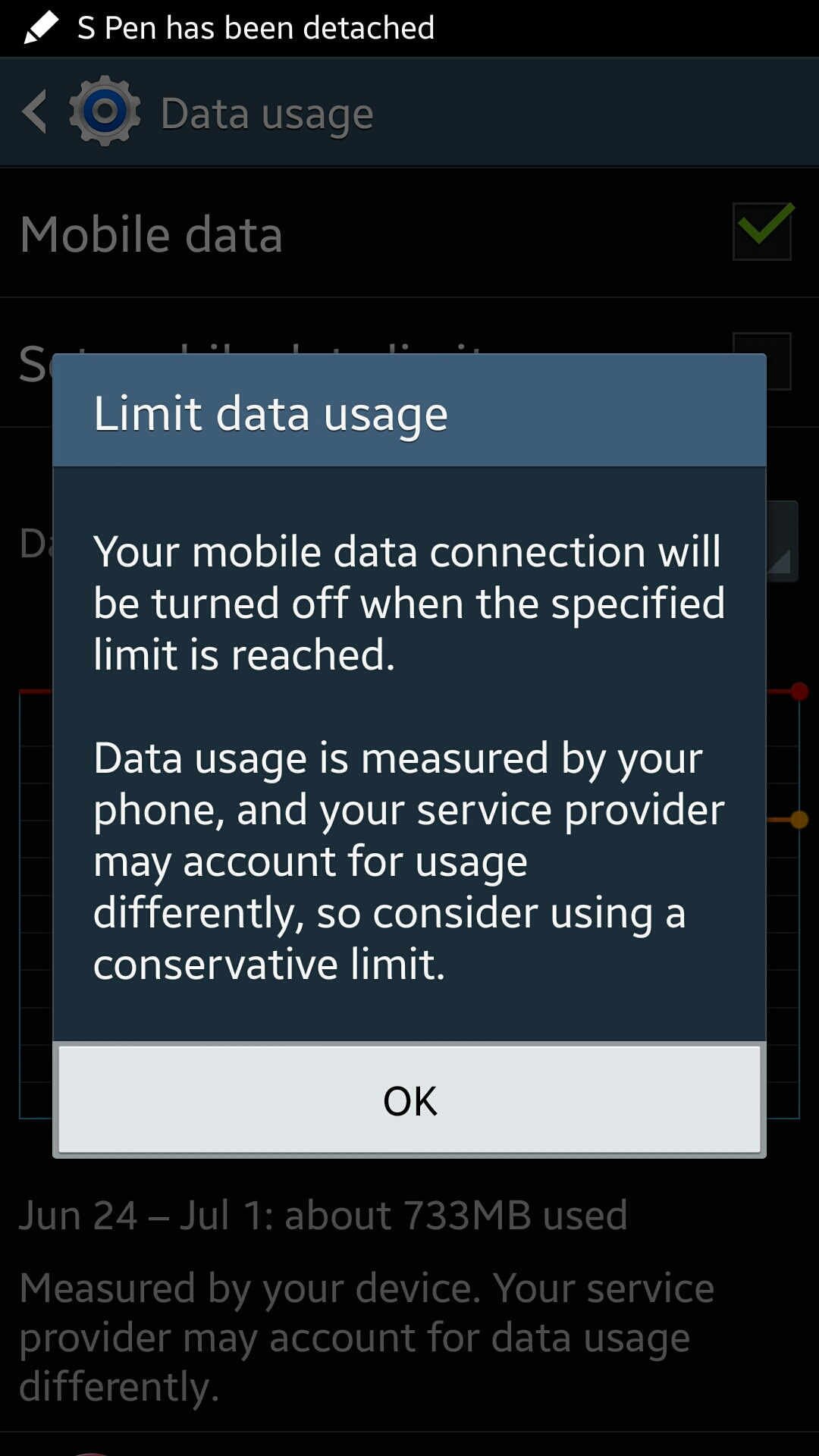 This warning informs users that their phone company may not measure data usage the same way the phone does. This limit doesn’t accurately reflect true data usage.

The warning means that the user’s phone company may not measure data the same way the phone does. If a person subscribes to a 10GB limit, they should set the limit in this setting lower than that total. Also remember that a shared data plan means one user doesn’t get 10GB, but shares that amount with others. For example, my family has five phones sharing 15 GB so I set my phone to 5GB, which is the amount I use of the total data cap, while the other phones get set at 2GB. When the phone reaches this limit, the Mobile data setting on this screen will turn off. 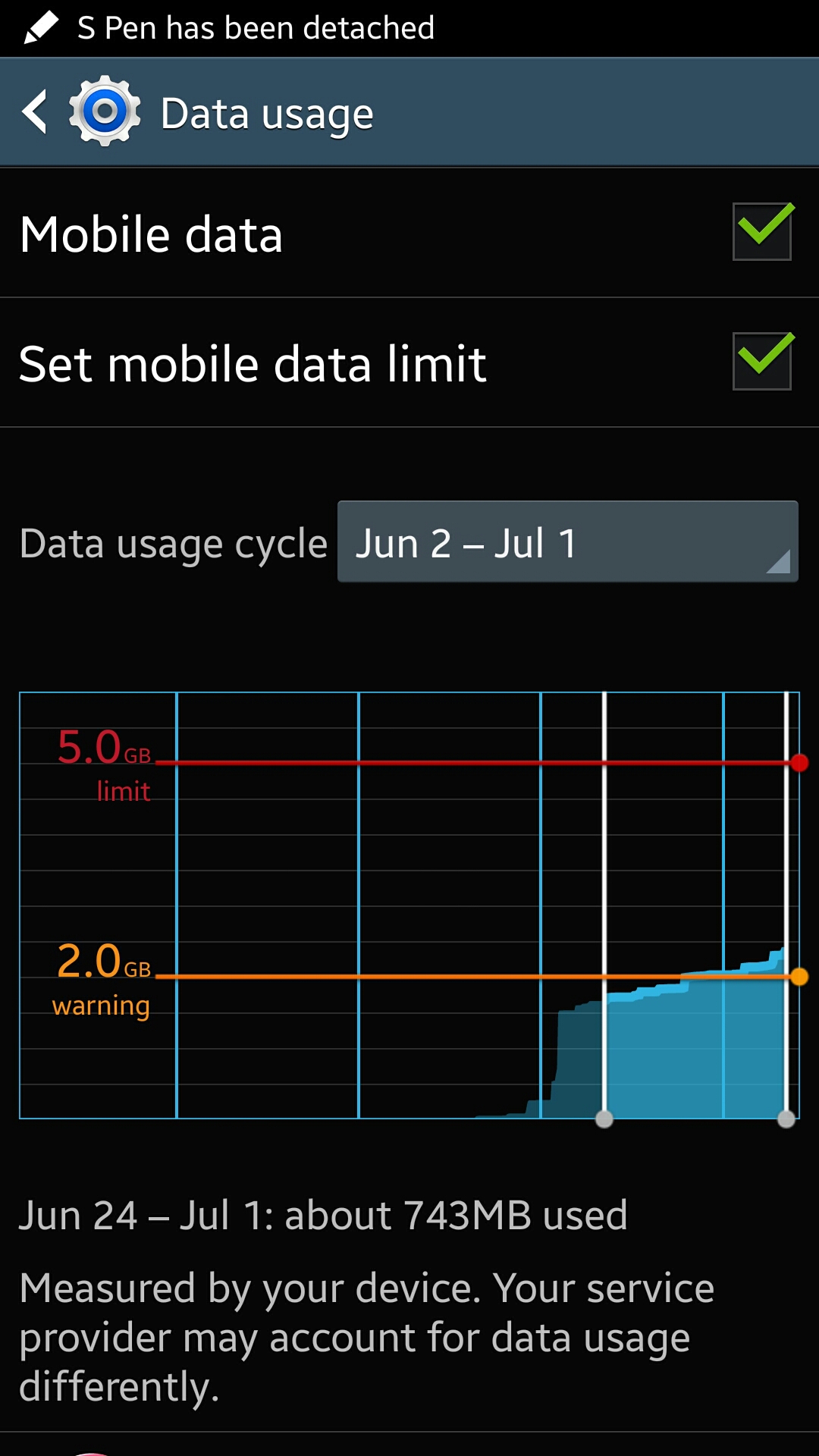 Find the date your phone subscription resets and enter it here.

Now we need to change the Data usage cycle on the Data usage settings screen. Tap on the OK button to clear the previous warning and tap on the drop down box next to Data usage cycle. Change the date to the date that your billing cycle resets. Check with your wireless carrier to find the date. It will show up on your bill, in the carrier’s account app, on their website or you can call customer service and ask. Mine resets on the 2nd each month, so I set it to the 2nd. It will automatically reset to zero on that day.

To change the limit and the warning threshold, grab the handle on the right end of the line in the graph and slide it up or down (by doing a tap and hold and then sliding up/down). It’s a good idea to set the warning far enough below the limit so that you don’t get surprised when it shuts off. Downloading a video or a bunch of pictures can use up data quickly.

On this same screen, slide down to see how much data each app used. On mine, Chrome and Tethering used up the most in my current billing cycle. This helps the user figure out what ate up the data if it suddenly went over. 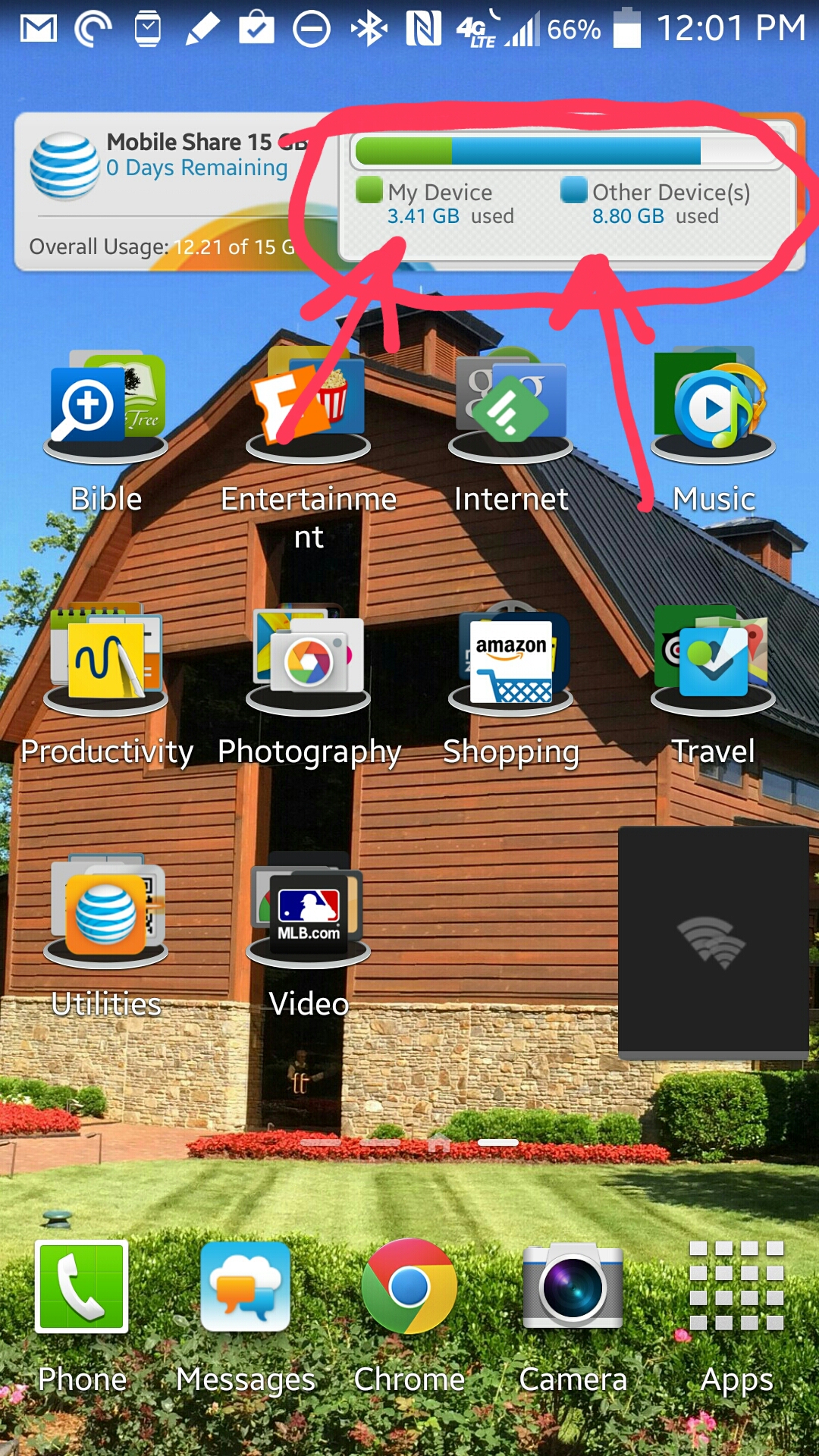 Install the AT&T All Access widget on the home screen to see how much data you and your family use in a month.

AT&T customers can keep track data usage from the phone’s home screen using the free AT&T All Access widget. It installs on the home screen and  quickly shows how much data the phone used during the current billing cycle. It also shows how much the family used on all devices.

Install the app using the link above, if AT&T didn’t pre-install it. Press and hold on a spot on the home screen. The Home screen customization menu pops up. Tap on Apps and widgets and select the Widgets tap at the top. Find one of the two AT&T All Access widgets by swiping sideways. One takes up one row on the screen and the other takes up two. I prefer the smaller widget that uses just one row.

The app may need to activate itself, so disconnect from Wi-Fi to make a direct connection with AT&T. The app will soon show the amount of data used since the last billing cycle the phone, and the entire account if the user subscribes to shared data. It will also show how many days left in the billing cycle, how much data the account subscription includes and the total data used by all devices in the shared plan.