Samsung’s Galaxy Note 4 is one of the fastest and most powerful smartphones available today, and as a result users will end up multi-tasking and opening a wide array of apps, or using the S-Pen stylus for tons of content consumption and creation. With 3GB of RAM and plenty of processing power you can run multiple apps at once, even two on the screen at the same time, but some users will still want to close apps on the Note 4.

Doing something as easy as clearing or closing unused apps may seem so general and simple for average users, but the first time smartphone owner or iPhone converts will need to know how to perform such a task on their Note 4 device.

Read: How to Find a Lost Galaxy Note 4

Now that millions of consumers own the Galaxy Note 4, we’ve been getting a lot of question, and this is one of them. Closing and clearing apps on the Galaxy Note 4 to improve performance and battery life is extremely easy, so read on to see exactly how to do it.

The general rule of thumb when it comes to Android is to let the operating system manage your memory, not to mention Samsung’s Galaxy Note 4 has 3GB of RAM, so there’s no reason it can’t handle tons of apps open at once. That said, there are still times a user may want to clear apps from memory that aren’t being used.

Google’s Android OS does an excellent job managing apps and multi-tasking unlike any other operating system by putting apps in a low-power state ready to be called into action when needed, and saving battery the rest of the time. Then you can multi-task and switch to and from apps with the app-switching button in seconds, for a smooth experience. However, many users still opt to close apps manually and here’s how to do it.

Clearing apps out of memory or the multi-tasking menu on the Galaxy Note 4 is actually extremely easy, and different from some older devices like the Galaxy S3. Older Samsung devices a long press of the dedicated home button would bring up this menu, but that’s no longer how it’s done. Now there’s a dedicated multi-tasking capacitive button to the left of your main home key, and this is where you start.

Simply tap the overlapping rectangle-like button to the left of the dedicated hardware home button. This is the multi-tasking menu key that brings up all currently used and running apps. For those that didn’t know, switching from Gmail to YouTube, then to the browser, and back to Gmail is extremely fast and efficient with this button. However, this is also where a quick swipe will close and kill apps.

The image above is what you’ll be greeted by once you tap the multi-tasking menu key, which shows all currently running apps. On the right side, you can see I’m swiping away the Google Play Store, closing that app. It’s a good idea to leave things like phone, messages, or even the browser in here, especially if you use these often. Clearing the SMS text app only means it will need to restart on your next message, wasting battery and CPU cycles. This same rule applies to all apps, so only close the ones you won’t be needing anymore. Things like Maps, Navigation, or games.

A simple swipe of your finger on each box will swipe them away, and instantly close the app. Any saved progress or website you may be on will have to reload next time you use that specific application. The image above shows the menu, and us swiping to clear something. That’s it, you’re all done. It is that simple to clear and close apps on the Galaxy Note 4. 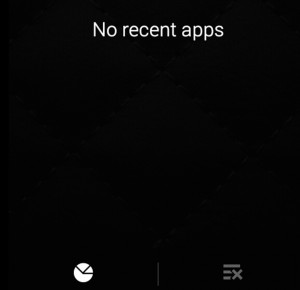 However, if you’re about to head into work and won’t be using your device or are going to bed for the night, you can opt to tap tje bottom left button. This is the three lines and an X, which is the “close all” button. This will close every single app currently running in the recent apps menu, leaving you with a blank slate as shown above.

Then the circle pie-shaped button will take you into the task manager to see how tasks or apps are behaving, how much battery they’re using, and what’s all running behind the scenes.

Killing all of your apps could end up slowing down the phone, as it will need to reboot certain apps as they are called, and in the end lower battery life. So again, only clear what’s necessary, and generally this menu and killing all apps isn’t needed as much as many users think.