Doing something as easy as closing unused apps may seem very simple, or a general daily tasks for select users, but if the fancy aluminum and water-resistant design of the new Galaxy S7 has Windows Phone or iPhone people switching to Android, users will need to know how to do select things on the Galaxy S7.

Read: How to Disable the Galaxy S7 Always On Display

After the February 21st announcement the Galaxy S7 and S7 Edge hit the market on March 11th, and millions of owners are loving them. Closing and clearing apps is easier than you think, in plain site, and can even improve performance and battery life in certain scenarios. We’ll explain those and more below. To start, the “rule of thumb” when it comes to Android is to let the operating system manage your memory, rather than users closing apps themselves. The Galaxy S7 and S7 Edge have 4GB of RAM and are great at multi-tasking, not to mention Android 6.0.1 Marshmallow does as well.

Android 6.0 even has a new feature called “Doze” that puts running apps into a low-power sleep state when not in use, to save battery life. This means that closing or clearing apps regularly won’t benefit users much, and could actually harm battery life if not done right. The overlapping square button on the bottom left lets owners switch to recent apps and back to something else in a breeze, but it’s also where we close them.

Removing or closing apps out of memory or the recent apps menu on the Galaxy S7 is very quick and easy, but may be different from other Android’s or older Samsung phones. So read on to find out how, and when to do it. There’s a dedicated multi-tasking capacitive button to the left of your main home key, and this is where we start.

Simply tap the overlapping rectangle-like button to the left of the dedicated hardware home button. This is the multi-tasking menu key that brings up all currently open or running apps. For those that didn’t know, switching from Gmail to YouTube, then to the browser, and back to Gmail is extremely fast and efficient with this button. This is also where we swipe away and close some, or all apps at once. 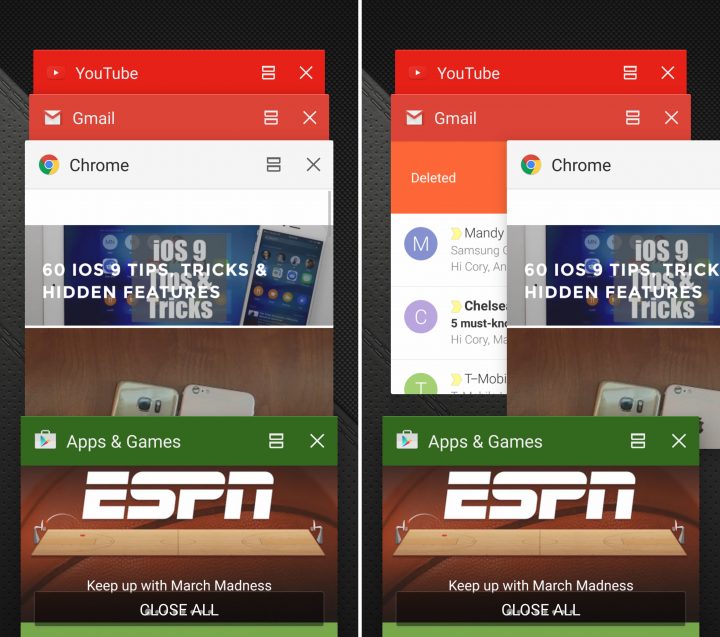 Shown above is the recent apps menu on Samsung devices. There’s no more options or task manages of old. Simply a Rolodex-style card view of all currently running apps, and one big “Close All” button on the bottom. You have two choices here.

A quick swipe of a finger on each box will swipe them away, and instantly close the app. Any saved progress or website you may be on will have to reload next time you use that app. Or start-over completely and lose wherever you were. The image above shows the menu, and me swiping to clear and close the browser. Next time I use it I’ll have to start over, and it may reload the page I was on. It is however, cleared from running apps for now.

As we said above, don’t close or clear everything though. Apps like phone, messages, or even the browser should stay here. Clearing the SMS text app only means it will need to restart on your next incoming message, wasting battery and CPU cycles. This same rule applies to all apps, so only close the ones you won’t be needing anymore. Big battery hungry apps like Google Maps, Navigation, or games.

Shown below is the second option, which is “Close All” and be done. This will completely close every app. This means websites will be lost, a text will be erased, that video in YouTube you were on and more will all wipe away. That’s fine, but just know hitting Close Apps will shut down everything, and probably isn’t something users should have a habit of doing non-stop all day every day. 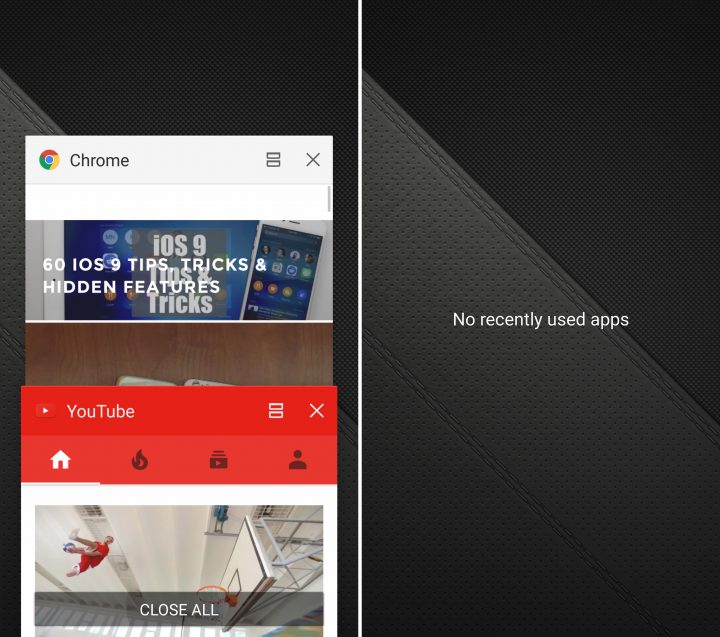 Again, we don’t recommend hitting the close all button for the reasons described above, as your device will just have to restart many apps again next time they’re needed, and kill battery life. However, at night, heading to work or other times when the phone won’t be used much, clearing all apps can be best.

Again, only close what’s necessary, which is why we’d recommend users just swipe away single apps one at a time they won’t be needing anymore, and leave everything else running in the background. Android 6.0.1 Marshmallow, Doze, and Samsung does the rest of the work for us. Good luck and enjoy the Galaxy S7 or S7 Edge.