The LG G4 is one of the latest and greatest Android smartphones of 2015 with tons to offer. Now that buyers are starting to get their hands on it, questions are starting to hit our inbox. Here we’ll explain how to close apps on the LG G4.

LG’s new smartphone has everything from a big and bright 5.5-inch display, one of the best cameras around, a powerful 6-core processor, to genuine leather build materials on the back. That 6-core processor means users can multi-task and open tons of apps at once, even run two at the same time, but eventually you’ll want to close some of those running apps to keep the battery lasting as long as possible.

Doing something as simple as clearing or closing unused apps may seem so simple for average users, but the first time smartphone owner or iPhone converts will need to know how to perform such a task on their new LG G4. Below are a few screenshots and the easy instructions for those who just bought the LG G4.

LG’s new phone has a powerful 6-core processor and 3GB of RAM, not to mention runs the latest Android 5.1 Lollipop that is very efficient at running apps, and saving as much battery as possible. However, you’ll want to close certain apps to get the most out of your phone.

The general rule of thumb with Android is to let the operating system manage your memory, not to mention the LG G4 comes with 3GB of RAM, so there’s no real need to manage anything. That said, there are still times a user may want to clear apps from memory that aren’t being used.

Google’s Android OS does an excellent job managing apps and multi-tasking unlike any other operating system by putting apps in a low-power state ready to be called into action when needed, and saving battery the rest of the time. That said, many users still opt to close apps manually and here’s how to do it on the new LG G4.

Clearing apps out of memory or the multi-tasking menu on the LG G4 is extremely easy, and here’s how to do it.

Simply tap the square on-screen button on the bottom of the display. This is the multi-tasking menu key that brings up all currently used and running apps. For those that didn’t know, switching from Gmail to YouTube, then to the browser, and back to Gmail is extremely fast and efficient with this menu. At the same time, this is also where a quick swipe will close and kill any running app. 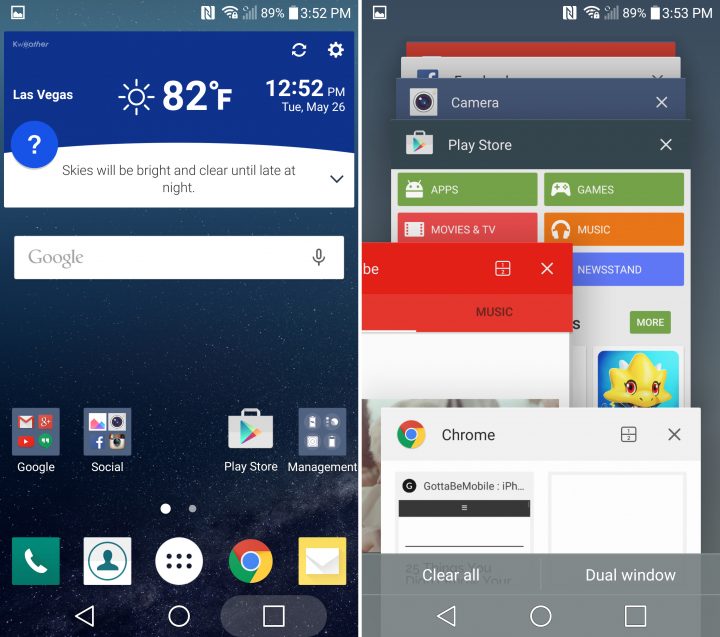 The image above is what users see once they tap the multi-tasking menu key, which shows all currently running apps. It’s a good idea to leave things like phone, messages, or even the browser in here, especially if you use these often. Clearing the SMS text app only means it will need to restart on your next incoming our outgoing message, wasting battery and CPU cycles. This same rule applies to all apps, so only close the ones you won’t be needing anymore. Android 5.1 has a beautiful and smooth rolodex style interface, and swiping up will scroll through all of the apps.

A simple swipe of your finger on each box will swipe them away, and instantly close the app. Any saved progress or website you may be on will have to reload next time you use that specific application. Above you can see me swiping away YouTube. That’s it, you’re all done. It is that simple to clear and close apps on the LG G4. 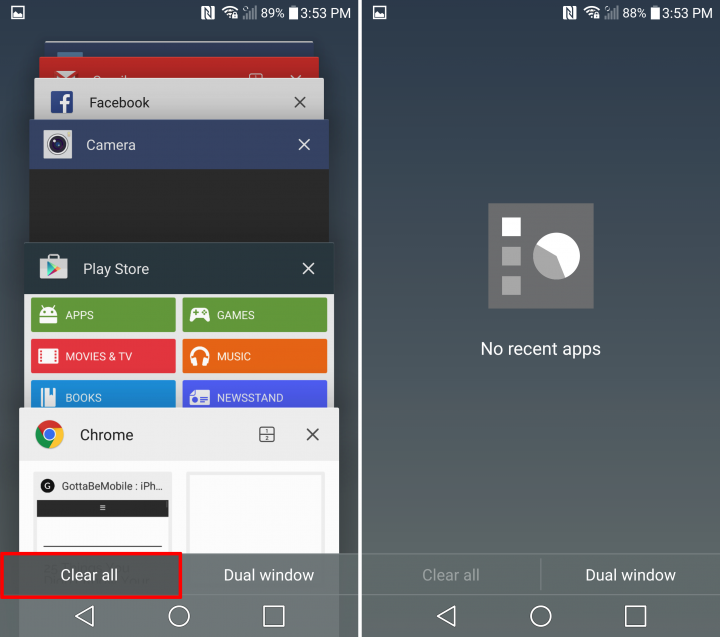 However, sometimes users may want to clear every app that’s running. Again, this is not recommended as the OS does a great job keeping most apps in a low power state. That said, LG has a “clear all” button on the bottom left which will wipe out every app currently in the system memory. A good time for this may be while at work and you won’t be using the phone for a while, if you’re driving, or mainly before bed at night.

Otherwise, we’d recommend only clearing apps that you won’t be needing, or apps that are battery hogs. Something like YouTube, Google Maps (navigation is a big one) and even Netflix. As they can be killed to preserve battery life. In general clearing apps is rarely needed on Android devices, especially ones as powerful and efficient as the G4, but each user has their own unique needs.

Killing all of your apps could end up slowing down the phone, as it will need to reboot certain apps as they are opened, and in the end lower battery life. So again, only clear what’s necessary, and generally this menu isn’t needed nearly as often as most users think. There seems to be a bug in Android 5.0 Lollipop though, where after you hit clear app, apps sometimes remain in the multitasking menu. So if you see this just clear it again.

In the end only close apps you won’t be using for the foreseeable future. Users claim all types of different results for clearing apps throughout the day and using the task manager, so give it a try and see for your self. Use this feature wisely and follow the steps above to close apps on your LG G4.