Figuring out how to close iPhone apps can be a little difficult, especially since Apple changed how the task manager worked in iOS 9.

Here’s how to close or kill apps on the iPhone. This works the same way on the iPad and iPod touch with iOS 9.

If you’re an Android user new to iOS, you might find the task manager that Apple built into the iPhone kind of familiar. The new multitasking screen in iOS 9 looks more like the one in recent flavors of Android than in earlier versions of iOS. 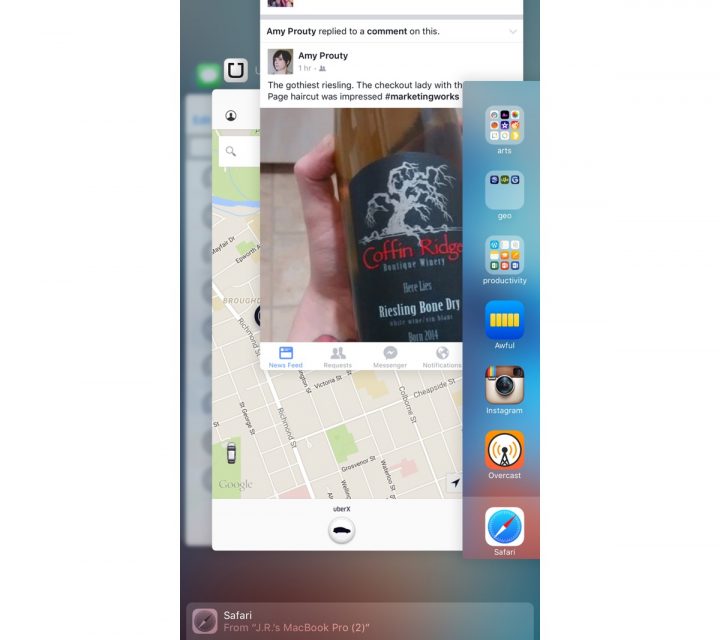 Double-click the home button to enter the iOS task switcher.

When you double-click the home button, you’ll find your current screen slides to the right and all of your recent apps are fanned out in front of you. To move between your various apps, you simply flick your way through the various screens until you hit the one you like and tap on it, where it will grow to fill the screen.

If you find yourself wanting to close an app, navigate through the display until you see the app you want to close, and stop. Don’t tap on it.

Slide your finger up, dragging the app toward the top of the screen.

When you’re ready to kill the app, simply drag it to the top of the screen, where it will disappear – and your iPhone exits the app completely.

Most of the time, when you exit an app by hitting the home button, it goes to sleep in the background, but doesn’t fully exit. When in stasis like this, it might not be using your display, but it could be downloading data or streaming audio or video in the background – eating up precious megabytes and battery life.

Apple is keen to stress that users don’t need to actively shut their apps down – that iOS can take care of that for them. Largely, that’s true. Sometimes, however, apps can misbehave, and the only way to regain control is to exit the app by killing it from the multitasking screen.

If you have an iPhone 6s or iPhone 6s Plus or later, use 3D Touch.

If you’ve recently upgraded to a new iPhone that supports Apple’s depth-sensing 3D Touch technology, you can access the iOS app switcher another way. Instead of double-clicking on the home button, 3D Touch the left edge of the display and swipe to the right. You’ll enter the task switcher and from here can move between or close whichever apps you like.