When it comes to using a smartphone like the Samsung Galaxy S5 there are tons of features, options, advanced controls and more, and sometimes it can get a bit confusing. For those new to Android, something as simple as enabling (or disabling) apps from updating automatically can be a challenge.

For those with a new Samsung Galaxy S5 that don’t want to be bothered every few days with a notification to update applications on the Google Play Store, you can simply set them to auto-update. On the flipside, many user want total control, so here we’ll go over how to enable, or disable automatic app updates.

If you hate being bothered by tons of notifications to update apps on your Galaxy S5 there’s an easy way to solve the problem. The Google Play Store has a few simple and easy to find settings to do this, but if you’re new, we’ll go through the detailed instructions below. 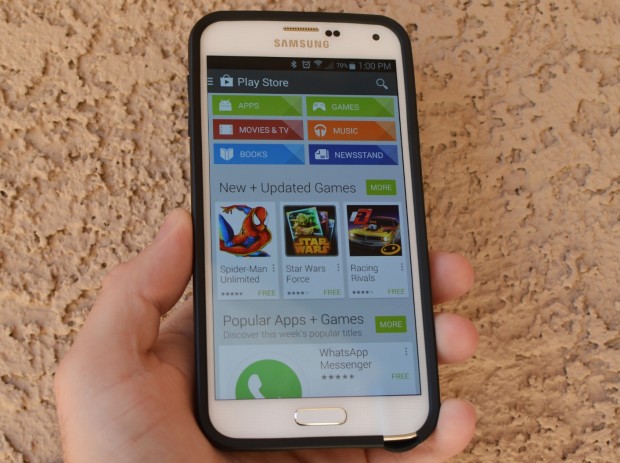 It is extremely easy to set up the Samsung Galaxy S5 to update all your apps automatically, without any interaction from you. Users can even set it to update over WiFi only, to save the limited data they may have on any carrier plans as well. Whether or not you should do this is up to you, and here’s how. 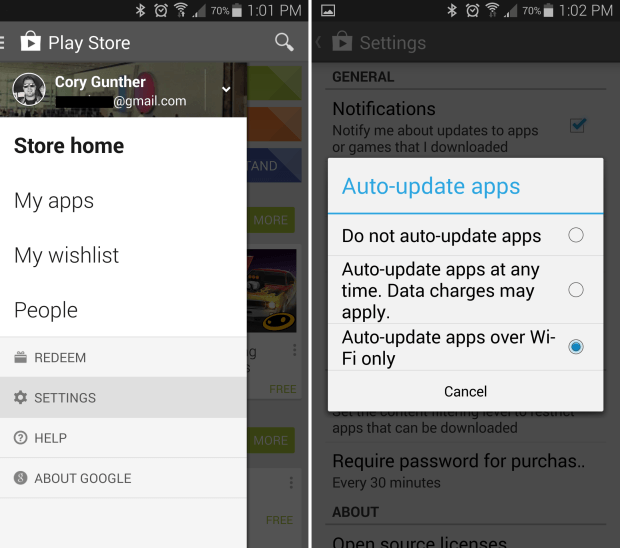 From here you’ll instantly see where you need to go. Under the General settings you’ll see the second option listed is “Auto-update apps” and you’ll want to select this. You’ll then see a popup appear with three options. Likely it’s set to automatically update apps, which is nice, but if you want to disable that you can do so here as well.

Simply tap to select “Do not auto-update apps” and you’ll have to manually update apps moving forward. However, this means you’ll constantly get notifications that new apps need to be updated, and it won’t do it automatically. I prefer to control what apps update, and when, so this is the setting I use. 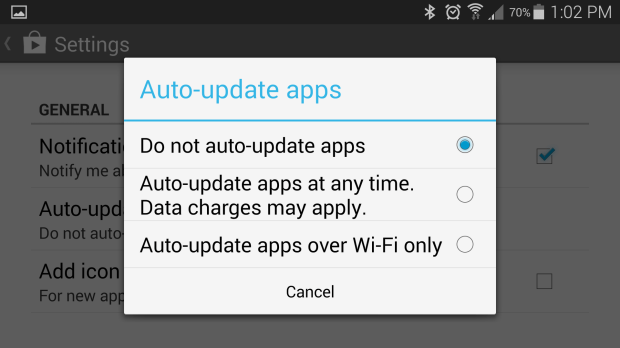 You’ll also notice an option to auto-update apps whenever, no matter what connection you’re using. This will use your 1, 2, or 5GB data plan, and could have you reaching your limits if you download music, movies, or big games. This confirms data charges may apply, so you’d probably want to set it for WiFi only. That is, unless you don’t have WiFi access.

It’s best to update apps over WiFi to save data, not to mention many home internet connections or WiFi spots have faster speeds than your smartphone.

Casual smartphone users or those new to Android may just want to let the smartphone do everything for them. I know my parents hate getting notifications for updates all the time, so they have it set to auto. I’d rather control what update, and look at changelogs and permission requests, so I do it all manually.

If you use auto-update you won’t know what’s new, because you didn’t read it when updating the app. You’ll just notice changes to popular apps like Facebook, YouTube, or even games you may play.

In the end it’s all about personal preference. How much time you want to spend messing with apps and manually updating apps, or just let your phone do all the work for you. Select what’s best for you, and change it as you see fit.