How to Disable Water Damage Popups on the Galaxy S5

The Samsung Galaxy S5 is a powerful flagship smartphone that combines most of the latest mobile technology all into one impressive device. When it first debuted back in February one of the biggest and best features was the IP67 certification. This makes the Galaxy S5 both dust and water-resistant.

According to Samsung the Galaxy S5 can be submerged in roughly 1 meter of water for over 30 minutes without causing any issues, but many water tests on YouTube shows it can handle deep waters for hours and hours, and come out working just fine.

Making the smartphone IP67 dust and water-resistant was an awesome move, as we’ve all surely lost a phone to water or the toilet, or know someone else who has. While we love this new feature with the Samsung Galaxy S5, there are a few popups to “remind” users they need to take a few steps to secure the device. They’re extremely annoying, but you can get rid of them. 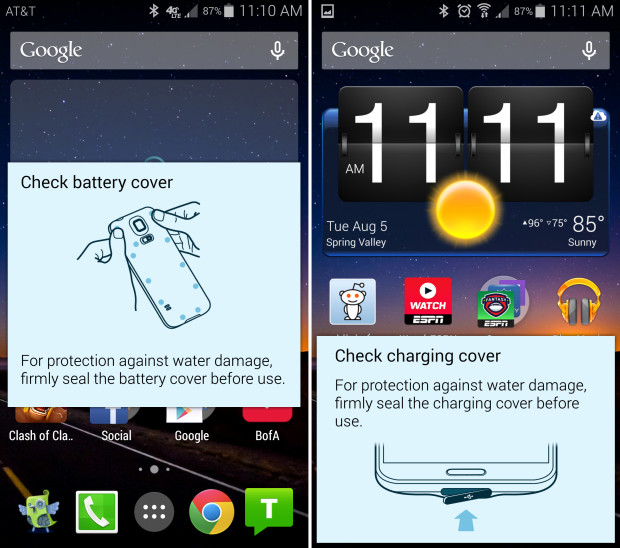 In order to let users fully understand that they MUST cover the charging port or tightly snap on the back cover for the water-resistant features to work, Samsung’s integrated some large and intrusive popup messages on the device. Every single time you unplug your Galaxy S5 from the charger the popup appears, often times after you’ve turned off the screen. Which means it wakes the device just to annoy users and remind them to cover the charging port.

The same popup also appears each and every single time a user reboots his or her smartphone. As you can see in the image above, they’re quite large, and you can’t miss them. Surely you all know what I’m talking about.

We have some bad news. If you own the Samsung Galaxy S5 on AT&T or T-Mobile, these popups won’t be going away anytime soon, and you’ll be annoyed by them every darn time you charge your smartphone. However, Sprint and Verizon let you hide these obnoxious messages.

I don’t know about you guys, but I don’t need to be told more than once or twice that I need to do this to ensure my $600 phone doesn’t get ruined. Let along every single time I charge it. That’s often multiple times a day. Thanks for the 150 reminders Samsung.

If you own the Samsung Galaxy S5 on Verizon or Sprint you can remove these popups. Most users without even paying attention already probably did this, but once they popup after you unplug the charger or reboot simply scroll down and select the “don’t show this message again” box. That’s it. You’ll never be reminded by these annoying popups again.

Read: How to Root the Samsung Galaxy S5

Sadly if you’re like me and have an AT&T or T-Mobile Galaxy S5, you’re stuck with these messages each and every single day, unless you hack your Galaxy S5. Users wanting to take some extreme steps can root the Galaxy S5 using the guide above provided at XDA Developers, install the Xposed framework, then download what’s called the Xposed G-TouchWiz Mod from the Google Play Store, and hide the popups that way. The video below explains it all.

As you can see from the video above, hiding these messages is rather easy for some tech savvy users, but average owners may want to avoid this. You’ll have to root your device (which may void your warranty) download a few additional files from unknown sources and install them, then get the app from the Play Store to manage your device.

These steps aren’t recommended for beginners, as some of the changes could potentially harm your device if you aren’t careful. It’s worth reading up on how Xposed Framework mods work on Android smartphones, then proceeding with caution.

That’s it. If you’ve followed all the steps mentioned above you should now have access to hide these annoying popups on your Galaxy S5 from AT&T or T-Mobile.