The brand new Samsung Galaxy S5 is packed full of advanced features, controls, fingerprint sensors for security and more but there’s a few more options that Google chooses to hide from the average user.

Developers and enthusiasts looking to control additional aspects of their device, change settings, or enable USB debugging for advanced functions will need to enable the hidden developer menu in settings. While settings for daily average tasks are easy to find and use, Google started hiding the advanced developer menu with Android 4.2 Jelly Bean.

Whether you’re looking to become a developer, install third party software or ROMs, or simply just want to hack up and mess with your new phone, you’ll have to start with unlocking the developer menu. It’s actually quite easy and only takes 5-6 taps of the screen, so read on for the full instructions and visual breakdown. 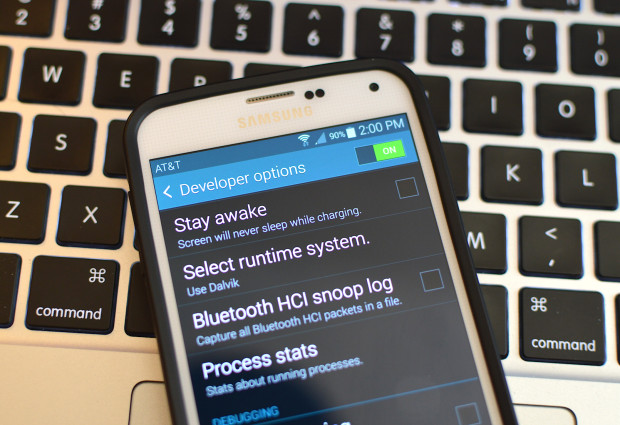 Every device running Android 4.2 Jelly Bean and above, including Google’s own Nexus 5 is required to take the steps below before owners can access this advanced and hidden menu. It’s an odd approach by Google but the system in place essentially requires a user to tap a certain area inside the “about me” settings menu for 4-6 times and you’ll be done.

For starts, this entire menu is for advanced users, and changing some of the settings or control can significantly alter the experience on your Android smartphone. And not in a good way. While there are a few necessary settings for certain tasks, the majority of them are only for developers. With that being said, read on for the quick instructions.

The few steps required are extremely easy and users will want to follow the minimal rules outlined below step for step to get these options readily available to you.

To start you’ll enter the settings menu by finding the gear-shaped icon in your application tray, or by sliding down the notification bar and tapping the same gear-shaped icon near the top right of the display. From here you’ll proceed to follow the steps below from the photos. 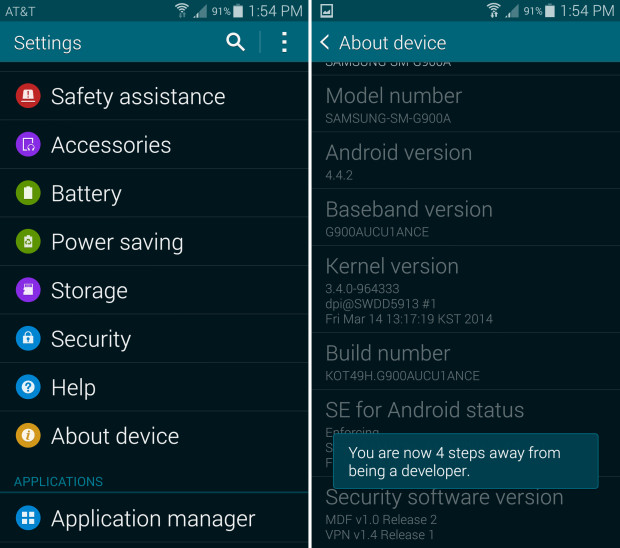 In settings simply proceed to the “About device” tab as shown above, and then you’ll simply tap on the “build number” from the screenshot above. Oddly all users need to do is quickly tap Build number 6-7 times and it will unlock the developer menu. After a few taps you’ll see the prompt above that you’re a few steps away, tap four more times and you’re done. It’s just that easy, and you’re now done.

Read: How to Take a Screenshot on the Samsung Galaxy S5

While we’re here, we have a hot tip for the average user. Those who aren’t seasoned Android users will enjoy the hidden Easter Egg that’s also in this menu. Go ahead and do the same multiple taps on the Android Version for some fun. Then a big K (for KitKat) will appear, long press the K that appears and enjoy the Android 4.4 KitKat Easter Egg. You can long press that again for a mosaic of all Android versions.

Moving on, users can now simply hit the back button and head back into the original base settings menu of the Galaxy S5. From here you’ll now see a brand new option right above the “About device” you navigated to before. 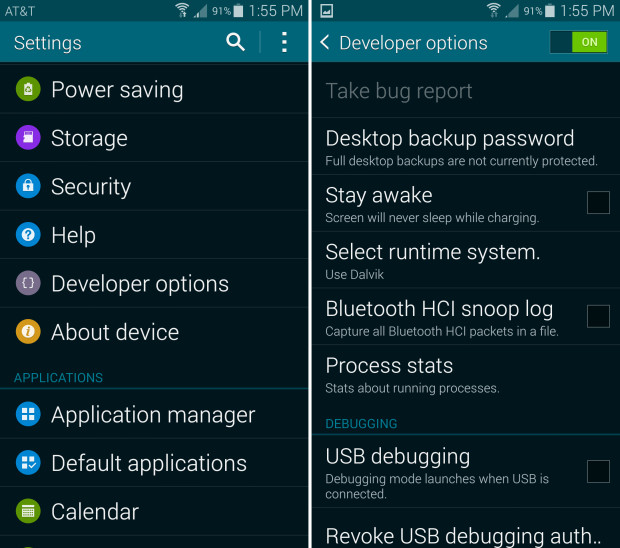 Developer options is now right about the About device setting, and a tap on that will take users into the previously hidden developer menu, which needs to be switched to on for full functionality.

As you can see from the screenshot above, from here there’s options to keep the screen awake while charging, USB debugging, Bluetooth controls, allow mock locations, debug specific apps, show screen touches, and tons of other little controls and advanced settings. Again, most of these are for developers, and aren’t needed for the average user. Thus explaining why they are hidden.

Read: How to Make Your Android Faster in Three Easy Steps (Video)

While most of the settings are for advanced users, there is one advantage to unlocking the developer menu, and the how to link above explains it. Scrolling down through the developer options you’ll see some animation scale options all set at 1x. Lowering these to 0.5x will make your phone feel much faster overall, and that’s all detailed in the link above.

Enabling the hidden developer options menu in Android is completely up to the end user and will not cause any issues or harm to the Samsung Galaxy S5. Most of the options included are hidden by Google for a reason, but those looking to hack their device will need to access a few of those settings.

This is one of those things that you don’t need to do or know, and in the end will be needed on a user-by-user basis. Give it a try today, and start hacking or tweaking that brand new Samsung Galaxy S5.