With almost every big Clash of Clans update a few problems tend to arise. The latest was a major December update aimed at improving the game. There’s plenty to love about the latest changes, but it’s also causing problems for some. Here we’ll explain how to fix the “Device is not compatible” error while trying to update Clash of Clans on Android. Additionally, we have more details about Google accounts not syncing correctly for saved villages.

It’s one of the most popular titles on Android and iOS. Millions of people play it daily. This isn’t the first time we’ve seen this error message, but recently it has been happening more frequently. Most other issues can be fixed with the instructions below.

Read: Clash of Clans Updates: 7 Things We Want Next

The last update added tons of level 11 troops, cheaper costs and other things. However, it also added some problems. In fact, some can’t update the game at all. As a result it can’t be played. This is a big issue, and hopefully the few suggestions below can help.

If you haven’t updated you’ll see a notification upon launching the game that an update is available. You cannot play until you accept this, go to the Google Play Store, and update to the latest version of the game.

Everything is fine for those on iOS, but Android users are being met with a very odd problem. Users are getting an error on the Google Play Store for Clash of Clans that says, “Device is not compatible with this version” and are unable to update. Supercell confirmed this is a problem, and has offered up a fix for those having issues.

Players affected by "Your device is not compatible with this version", please try: Settings >App Manager>Google Play Store>Clear data/cache

If you can’t update, you can’t play. Some are even in an active Clan War and can’t update in order to fight before time runs out. Which as many can imagine, would be very frustrating.

Update: On February 26th Supercell made some changes and had another small maintenance break to fix the device incompatible and other Google services issues. Let us know in the comments below if the problem is still going on.

Update #2: On March 4th Supercell finally fixed the Google Play Store device not compatible Clash of Clans problem, as well as the Google Games ID and sync issue many users have been experiencing. According to them, those who were unable to sync their Google Games account to restore or save a village, and the thousands of users who couldn’t update, should all be able to download the latest update from the Google Play Store release late last night and this morning. Head into the Play Store, check for updates, and download it right now to get back to Clashing.

Update #3: The new December Clash of Clans update made this issue appear again. Users have also experienced crashes while in global chat, chat logs being out of order and other small things. Supercell may release another optional update to fix this.

Even people that have been using the same device for well over a year are having issues. We’re seeing reports all over Twitter that people with tablets, the LG G3, Galaxy S6 and other devices are all experiencing this error. I’ve updated a Galaxy S7, Nexus 6P, Pixel C tablet and Nexus 9 all without any problems. So we’re not sure what is causing this at the moment, or what Android devices are experiencing it.

If you are trying to update Clash of Clans on an Android device but running into problems, there are a few potential fixes. There is either something messed up with the Google Play Store, or something Supercell did. They’re blaming it on the Google Play, and suggest users clear the Store cache or data to resolve it. Above are basic instructions, but below are screenshots to help those experiencing issues.

Pull down the notification bar on your Android device and hit the gear-shaped settings icon, or find “settings” in the application tray. From here navigate to Apps, or App Manager. Next scroll down and find Google Play Store. Select this, and tap “Clear Cache or Data” as shown below. 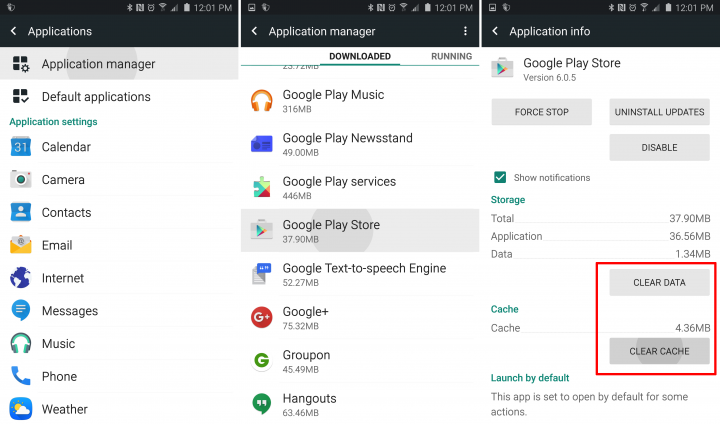 This should erase everything, and get rid of any corrupt files that seem to be causing this problem. Supercell claims this will fix the error. Multiple comments suggest it worked. Now go back and download the update.

However, if this doesn’t solve the problem another option is to uninstall Clash of Clans and re-install it. Yes, that sounds scary, and no one wants to lose their entire village by uninstalling the game. You won’t. Obviously proceed at your own risk and use caution.

Read: How to Transfer Clash of Clans to a New Phone

If the game is backed up to Google+ or Google Games (an option in settings) your progress is saved. Meaning you can uninstall Clash, reinstall it, and restore your progress simply by going into settings and connecting to Google+, and it will restore your village in less than 10 seconds. However, if you never linked the two, this won’t work. So do not uninstall Clash of Clans unless you know it’s backed up. The guide above goes over a few details regarding transferring the game to a new phone, which is also how you can save progress. That said, if you can’t open the game you can’t link it to Google Games. Do not uninstall Clash of Clans unless you know it is saved.

This is a big problem. Supercell states that clearing the Google Play Store cache is your only option, and it should solve any issues. They’re currently looking into other options, and will offer up additional information if available.

At the end of the day, did clearing the cache or data fix it for you? Let us know in the comments below. Those who fixed it using other methods, feel free to share it below. The December update was loaded with content and a Christmas theme. Expect a bug fixing update in 2017 along with removal of the winter theme.