The LG G4 smartphone has a large 5.5-inch Quad-HD display and a powerful processor inside that will drain the removable 3,000 mAh battery rather quick. Even though LG offered a free battery for many early buyers, users will still want to read on and learn a few tips to help get better LG G4 battery life.

Recently the LG G4 was updated to Google’s latest Android 6.0 Marshmallow software release, which should improve battery life across the board. Google made a lot of battery-saving adjustments, including a new “Doze” mode that puts apps to sleep. However, we still have other tips you’ll want to try.

The removable 3,000 mAh battery inside the LG G4 is bigger than most flagships, like the Galaxy S6, and has more than enough to get most users through an entire day. However, users are always looking to get more from their phone, and there are even some LG G4 battery cases worth considering.

If you’d like to get better battery life from the LG G4 and don’t want to be pulling off your back and swapping the battery, or buying a bulky case with a built-in additional battery, changing a few things and keeping an eye on certain apps will help things in the long run.

Android 5.1 Lollipop ran pretty good, but those who’ve received Android 6.0 are experiencing even better battery life. That said, some users are experiencing problems, or having odd battery drain. As a result, check out these tips.

Below are a few steps and simple tweaks that all LG G4 owners can do in a matter of minutes that could be just what you need to get a few more hours each day from the smartphone. Enough to make it through a night out with friends, or finish a long weekend at work. The G4 supports quick charge, and the charger in the box will charge it up to 60% faster than old traditional chargers. So always use the wall adapter that came in the box. With that said, lets get started.

Having that big 5.5-inch Quad-HD screen playing video, displaying Facebook messages, tweets, or while browsing the web will be the biggest drain on the battery. Screen on time under the battery stats page in settings is important, as the display will usually be at the top of the list. As a result you’ll want to head into Settings > Display > Brightness and choose something that works for you. Auto isn’t ideal for conserving battery, and I use somewhere around 30-40% brightness. Setting it to auto means it changes on the fly, but the constant up and downs will slowly make battery life worse throughout the day. 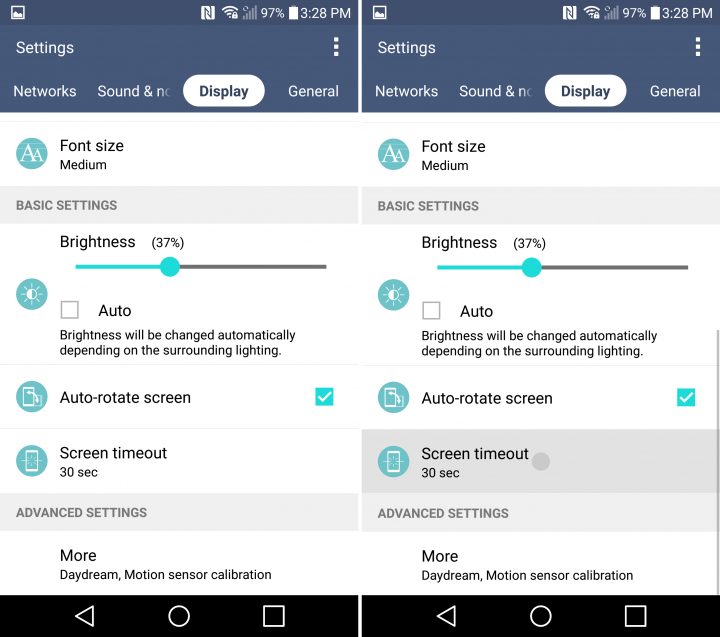 At the same time, you’ll also want to set the display sleep time. This sets how long the display will stay on after you stop using the smartphone. Many users just drop a phone on any table after use, and if this is set to two or five minutes, your screen stays on for 2-5 minutes draining battery for no reason. I use 30 seconds personally, and always manually sleep my display after use, instead of just setting the device down. Meaning tap the power button on back to turn it off whenever you’re done using it. When you do this 100 times in any given day, that’s 100 times the screen will be on for 30 seconds (or longer) than it doesn’t need to be. You can also try the tip below to make your phone faster and get better battery life at the same time.

Read: How to Speed up the LG G4 or Galaxy S6 in Seconds

If you aren’t using WiFi or Bluetooth, you might as well turn them off. Even though they’re minimal when it comes to battery drain this is one more quick and easy step. If you’re in a WiFi location (coffee shop) yet not using WiFi, certainly turn it off as the device will continuously search for a network. Bluetooth being enabled isn’t much of an issue, but while we’re here, disable it if you haven’t a need for it. Head into Settings and just slide both WiFi and Bluetooth to the off position. It’s the first two options. 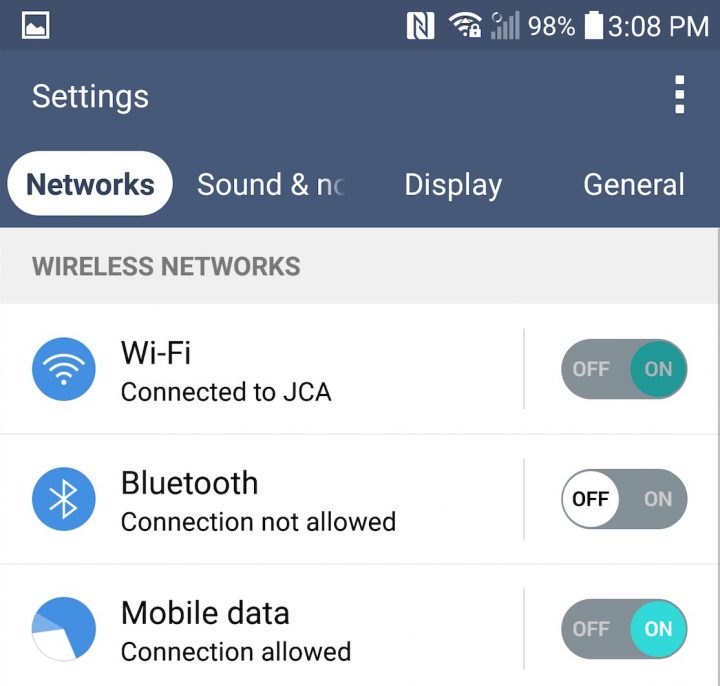 Your best route is to head into settings > general > smart settings. Tweak these so WiFi is on when you’re home, and off when you leave. Bluetooth is on while driving to connect to hands-free stereos, but off when it isn’t needed. This all happens automatically,  which is why these are called “smart settings”. 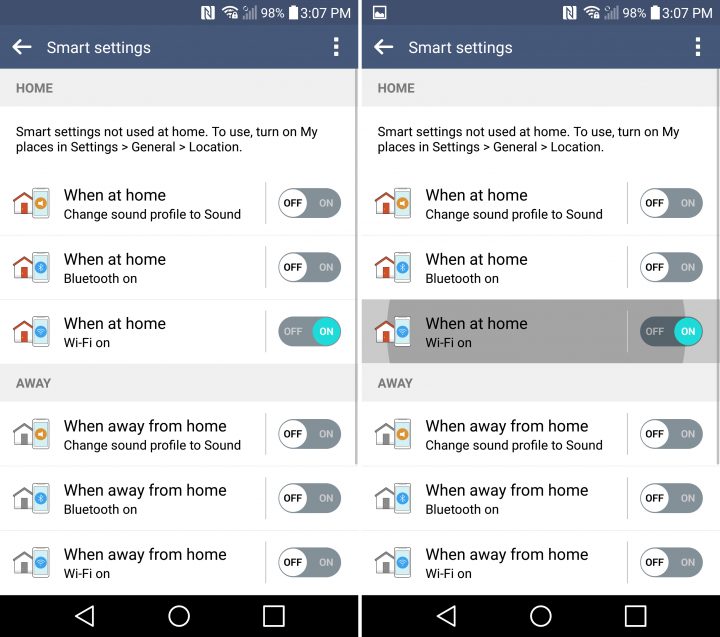 Then of course, using things like Tethering will drain your battery, so use this only when necessary. Anything using 4G LTE and data often will drain the battery. Use WiFi as often as you can, but turn it off when not in use.

When your device uses GPS for Google Maps and Navigation, or Facebook wants your location to share with the world, GPS will need to power on and will use a lot of battery. In Android 4.4 KitKat Google finally changed this system, and gave users more control over how all aspects of location services uses GPS, and thus, the battery. Settings > General > Location > Mode and select Battery Saving. This options is also available on Android 5.1 and Android 6.0 as well.

With Marshmallow “Doze” works on its own, which puts apps into a deep sleep when the device hasn’t been used for a certain amount of time. No settings or changes are needed for Doze to work, as it does everything automatically and can increase battery by 15-20%.  Even more on tablets. 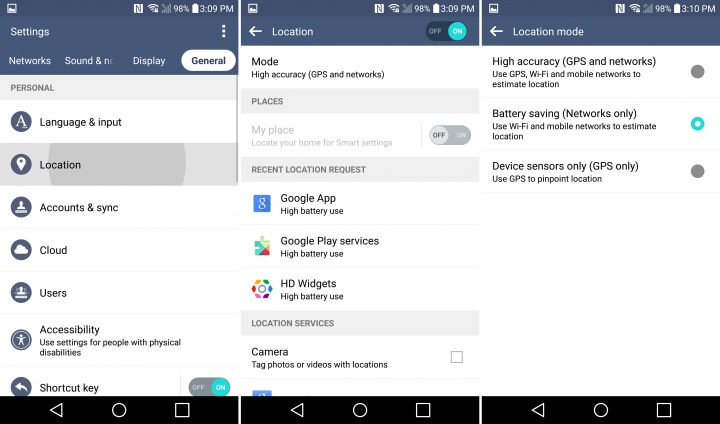 If you want to really kill everything, turning location services completely off will be a big saver when it comes to battery. Just don’t expect Google Now to be as useful, give you directions, or find nearby restaurants and businesses. Facebook and Messenger apps won’t share location, and Instagram or photo uploads won’t have any location data. In general leaving Location services enabled and on Battery Saving is ideal. As this uses mobile networks, towers, and WiFi access points to determine location, instead of the power hungry GPS chip inside your smartphone.

Controlling what is automatically backed up, synced with Google, and otherwise transferring data is another thing to consider. You’ll want to keep most of Google’s sync settings enabled for Calendar, Contacts, Gmail, and other things, but if you don’t need Gmail syncing and checking for emails every minute, change it. Gmail can be set to check whenever you’d like. From push, to 30 minutes, to never. Settings > General > Accounts > Google > and selecting account will show the sync options. 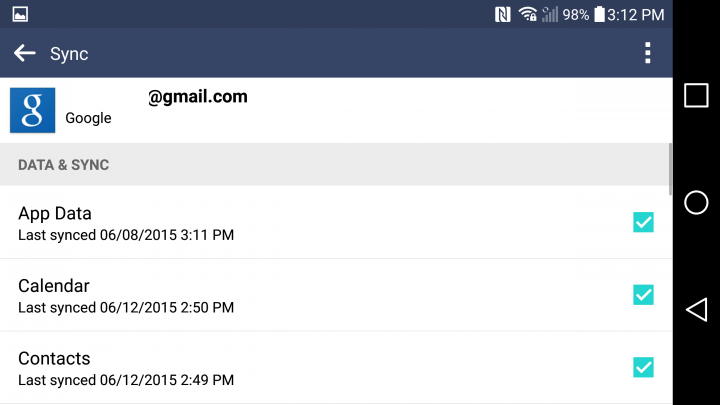 Having Google sync everything from Music, Chrome browsing history, and even saving app data and settings is nice, but also lowers battery. I’d keep this all enabled, or disable it but remind yourself to sync every now and again to keep everything up to date. Auto Backup of photos by DropBox, Google Drive, or Google Photos will also drain battery, so set them to be over WiFi only, or while charging. Most have that option.

Most of these backup and sync features are useful, but if you don’t use Google Photos, Google Play Music, Movies, and many other things in this area, disable them to save a little bit of battery wherever you can.

The LG G4 and its software has plenty of battery saving features, but if you install the free SnapDragon Battery Guru software you’ll see better G4 battery life with changes you rarely notice.  This app learns usage habits and where you connect to WiFi and more to customize when settings turn on and off. Then does it automatically. Which results in nothing for you to do, but enjoy a longer lasting device.

This is an app that works on any Snapdragon powered device, and early tests show it works pretty good on the LG G4 and its 6-core processor. However, a lot of what this does is already handled by LG Smart Settings. See what works best, and only use one.

Another great option is using the built-in battery saver mode. This is a feature under Settings > General > Battery > Battery Saver. This feature is customizable and will let you set when your phone goes into this mode. I have it set at 15% for when it’s truly needed. It will turn down screen brightness, kill WiFi or data when not in use (so you may not get Facebook notifications, Twitter alerts, or Gmail notifications) and even turns off the notification LED from flashing and taking little bits of battery. 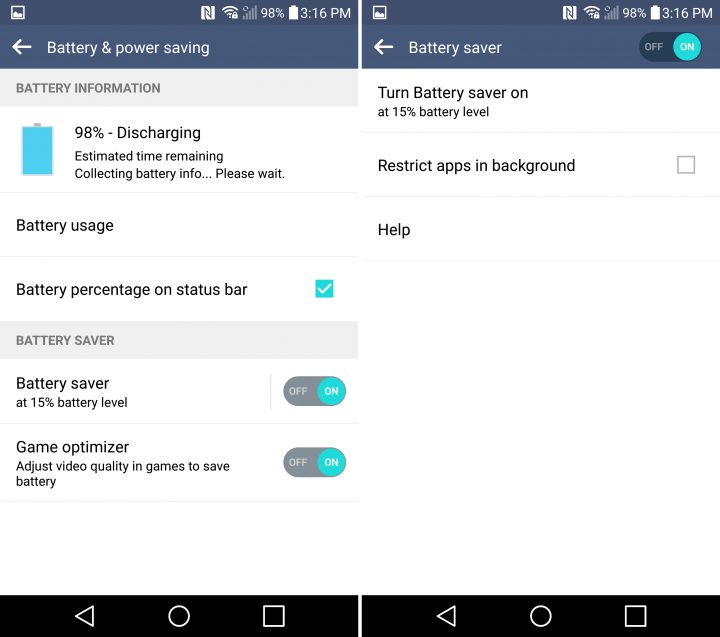 Go in and set this up as you see fit. Once your phone gets to 20% (or whatever point you choose) battery saver mode will kick in and start sipping juice to get you through those last few hours of the day. It isn’t ideal, but will work great in case of emergencies.

Everything we just explained are small but worthy tweaks that actually make a noticeable difference on battery life, but you can always get apps like BetteryBatteryStats to see what apps are draining the most battery. Then stop using them. Things like rogue apps you may want to uninstall, or simply battery hogs.

If you’re on a flight or taking the train with no service, enable airplane mode to save it for when you arrive. Airplane mode turns off all data, radios, services and more and most phones can last 4-5 days on airplane mode. Occasional device restarts can also help to flush out the system and memory, and give your device a clean slate for the day or work week. It’s also a good idea to do a factory data reset (which erases everything) after the Android 6.0 update, for the best experience possible. And that includes battery life.

These are just a few of many different options available to users without getting deeper into the Android OS. Anything from custom ROMs and kernels can also severely impact battery life for better, or for worse. Enjoy the quick list, and if all else fails buy an extra battery since the LG G4 lets you swap it out when needed, or get an external portable battery.