Google has been putting a lot of effort into streaming content as of late. With Google Play Music offering unlimited music streaming for $9.99 per month, to the new YouTube Red with no ads, offline video playback and more. Below we’ll explain how any Chromecast or Android TV owner can get each service for free, as well as a free $6 gift card to the Google Play Store.

The Google Chromecast is already a pretty awesome little gadget that has a lot to offer being only $35. Allowing owners to “cast” or stream nearly anything from their Android or iOS device to a TV, which also makes any TV with an HDMI port instantly a smart TV all for $35. However, this weekend a new deal emerged offering 90 days of Google Music for free, as well as a free $6 Google Play Gift card.

Read: How to Get YouTube Red for Free on iPhone

Similar to a deal offered back in February, or even in July of 2014 when Google started giving out free money to everyone who bought a Chromecast, this week the same deal is back and better than ever. Read on past the break to see how easy it is to redeem this deal and get some free music, movies, games, apps, and even $6 right from Google. 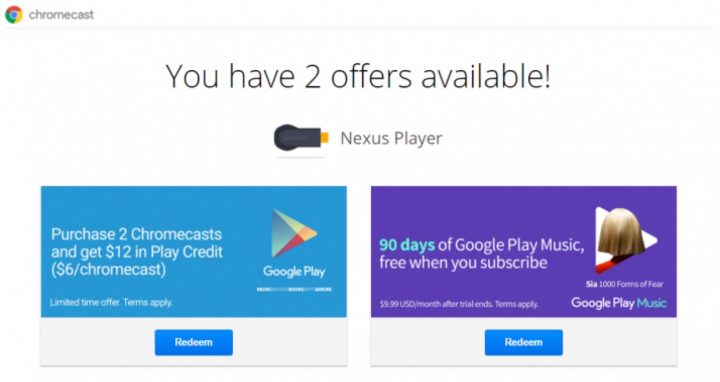 All you need is a Google Chromecast, Chromecast v2 (2015), Nexus Player, NVIDIA SHIELD TV, or any Android TV device, and be located in the United States to be eligible. For simply owning a Google Cast or Android TV device Google is giving out 90 days of Google Play Music and YouTube Red for free, and a $6 gift card.

It’s worth noting that a subscription to Google Play Music or YouTube Red, is good for both, so redeeming the free 90 day subscription with the deal below will give owners access to both, as long as you’re not already a subscriber.

Those who have two Google Chromecasts can redeem this deal on both, and get $12 in free credit for apps, games, music, movies and more on the Google Play Store. I have the old Chromecast, the new Chromecast, a SHIELD TV, and the Nexus Player, and was able to get 90 days of YouTube Red for free, and $12 in Google Play Credit, and here’s how.

Again, owners will need to be in the United States to take part in this deal, and own one of the above mentioned devices. You’ll have to go to Google’s Chromecast website using the Google Chrome browser (only) and activate the offer and you’re all set. It takes less than one minute, and is absolutely worth it.

That’s it. All users need to do is go to the offers website using Google Chrome (on a computer) as it doesn’t work on mobile devices, find connected devices like the Chromecast, Nexus Player, SHIELD TV, or any Android TV device and it will show current offers available. Collect $6 for one device, then go back, select another (if applicable) and redeem another $6 for your second device. Thanks Google.

Some have reported that only the 90 day Google Play Music subscription is showing, and not the free gift card. Google suggests users check back in the next 24 hours and the free $6 Google Play Gift card should appear.

We can’t confirm that this will work for all Android TV devices, but being the SHIELD TV isn’t a Google device like the Chromecast or Nexus Player, and it still received the same deal, others like the Razer Forge TV and select Sony Android TV-powered sets and more should all be able to take part in this deal. As long as it appears in the connected devices list at the offers website, users should be able to get free stuff.

We’re not sure how long this deal will be live, so we’d suggest users take Google up on this offer now before it’s too late.