If you’re running a bit low on Dropbox storage, here’s how to get more for free, or at least at a low cost.

Dropbox is one of the most popular cloud storage solutions on the market, and it has become one of the easiest services to use, thanks to an intuitive web interface and mobile and desktop apps that make it easy to upload files to the cloud and access them on any of your devices.

Dropbox users are given a paltry 2GB of storage for free, which isn’t a lot at all and it’s one of the lowest free tiers of any cloud storage service. To compare, Google Drive offers 15GB for free and Box provides 50GB of free storage to users.

While Dropbox has been rather shy about storage promos recently, there are still ways you can gain some extra storage with Dropbox, whether it’s making more room by clearing out files you don’t necessarily need in the cloud or simply just purchasing more storage for just a handful of dollars per month.

Without further ado, here are some ways that you can get more Dropbox storage.

It’s not a new concept by any means, but Dropbox lets you earn more storage if you refer a friend to sign up for the service. They’ll also give your friend free storage as well.

Dropbox will give you and your friend 500MB of free cloud storage when they sign up for an account, and you can earn up to 16GB of storage space, which means you can refer as many as 32 friends before you’d reach Dropbox’s maximum referral limit.

If you’ve met your max referrals for Dropbox, but still need more storage space, you can more space from Dropbox, but the options are pretty limited. In fact, there’s only one paid storage plan that you can get, and it’s 1TB of storage for $9.99 per month. 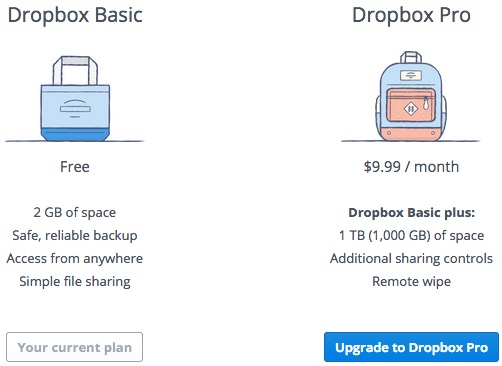 Google Drive offers cheaper plans for those who don’t need that much storage, including 100GB for just a couple of dollars per month, but it seems Dropbox either wants you to pay $10 every month or nothing at all, which is the only downside of the service if you need a lot more storage space.

One of the easiest and cheapest ways to gain more Dropbox storage space is to get rid of old files that don’t necessarily need to be taking up your precious cloud storage. I use Dropbox to keep a lot of files, but most of the time, there’s stuff in there that I either don’t need anymore, or can be moved to my computer’s local storage or to an external drive.

Because of this, it’s a good idea to go in and see what kind of files you have stored in Dropbox and figure out if it’d be worth freeing up storage space or to buy more storage using Dropbox’s paid plan (or referring friends to sign up in order to get a storage boost).