Social scientists and police departments have struggled to accurately identify the exact conditions that create a heaven for crooks and robbers since the dawn of the world’s largest cities. Apparently, they needn’t have bothered. Statistic compiled by the New York Police Department indicate that owning and using Apple’s iPad and iPhone are the only things users need to heighten their chance of being mugged.

A new report from The Wall Street Journal based on statistics gather by the NYPD indicate that of the roughly 44,000 grand larcenies committed in New York City, 8,645 of those larcenies involved an Apple product. To be clear, New York City defines grand larceny as a theft that’s valued at $1,000 or more. 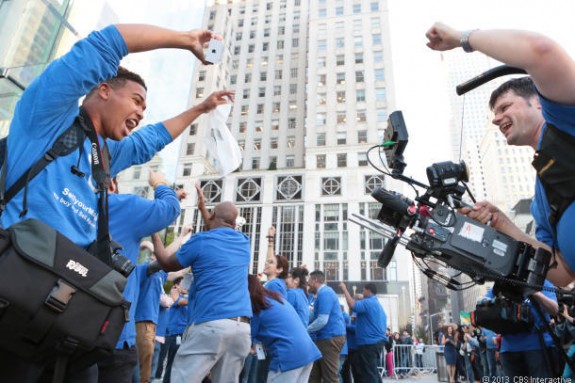 Samsung Videographer celebrates with the first person to get the iPhone 5S in New York City, Brian Ceballo

iPhone and iPad aren’t the only devices to cause this kind of rise – comments made by Eugene O’Donnell, a former NYPD officer cited in the report, indicate that thefts rise when a hot new technology launches, However, Apple’s devices do seem to be the perfect target.

Though the iPhone is outnumbered by sales of Android devices as a whole, it continues to dominate sales for individual smartphone models, making it a hot target for anyone who wants to steal and resell one for parts. The device’s immersive nature also makes it a prime target. People who are using an iPhone, iPad or any other mobile device are usually glued to its screen or listening to music. These users forget to think more about the area they’re in and anyone who might be following them. Finally, the iPad and iPhone’s signature white Ear Pod headphones certainly don’t hurt. The headphones act as a pretty clear indicator that the user is carrying an expensive mobile device.

iPhone theft has become such an issue that government officials began lobbying Apple to include better security technology inside every iPhone or iPad. Whether those officials were successful remains unclear, however Apple’s iPhone 5s does include a Touch ID fingerprint reader that prevents thieves from accessing user’s devices.

Read: NYPD Has a Team Dedicated to Finding Stolen iPhones and iPads

At this point, it’s unclear whether including Touch ID in the iPhone 5s has affected theft numbers. New York City’s grand larceny numbers do show a slight increase in Apple related theft for 2013, however the iPhone 5s didn’t go on sale until late in the year, making any possible impact on these numbers small at best.