The 4-inch screen of the iPhone 5 is great for watching video, but sadly the iPhone 5 doesn’t include the YouTube app which shipped with every other iPhone.

Thankfully, there are still ways to watch YouTube on the iPhone 5, and both methods are arguably better than the YouTube app that used to ship with iOS 5.

Google released the new app last week, just one day before Apple unveiled the iPhone 5, and a week before iOS 6 released, removing the built-in YouTube app. The app has most of the features of the website, including the ability to play ads before videos. 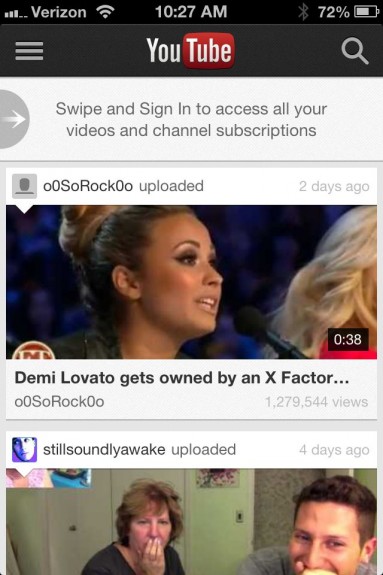 Sadly, however, YouTube is one of the many apps in the App Store that isn’t yet ready for the taller screen of the iPhone 5. The app has black boxes above and below it on the iPhone 5 screen in every view. Hopefully Google will fix this sooner rather than later.

Until Google updates the app the best method for watching YouTube videos on the iPhone 5 is through Mobile Safari. Users can visit m.youtube.com on their iPhones and still watch videos. The website is a bit slower than the app, and not as intuitive, but the same videos will work on both.

By visiting YouTube in the browser, there is no letterboxing, and users can watch videos on the iPhone 5’s larger, wider screen.

Hopefully Google will update the app soon so iPhone uses can get a better YouTube experience.

The new YouTube app and the mobile version in Safari don’t allow users to upload videos to YouTube, but the built in Photos app and iMovie still let users upload to YouTube. In our iPhone 5 speed test it took just 5 minutes to upload an HD video to YouTube.

This option includes the same YouTube upload options as the Phone 4S and iOS 5.