If you have an annoying Facebook friend that you wish you could unfriend, here’s how to hide their Facebook posts without unfriending them.

If you’re Facebook friends with someone, but would love to unfriend them, that’s not always the best way to go. It could raise a red flag for someone that you unfriend, and while they won’t get a notification or anything, there are many Facebook users who are infatuated with having as many friends as possible that they could certainly notice if their friend count went down, and they’ll go looking to see who it was. There are even services out there that can notify you when someone unfriends you.

In any case, here’s how to hide a friend’s Facebook posts without unfriending them.

More often than not, when people complain about their Facebook friends, it’s usually because those friends are posting annoying things that aren’t entertaining at all. Facebook is all about posting exciting things, like vacation photos, cute photos of your pets, and fun anecdotes about something that may have happened recently.

However, many of your Facebook friends are likely just posting annoying political rants or stupid selfies that you’d rather just not see. Usually, most of your friends only do this every so often, but there are those few friends who post nothing but annoying things on Facebook. These are the people you want to hide.

To hide all of a Facebook friend’s posts, simply just go to their profile page and then hover over the button that says Following, which will be located inside of the Cover Photo.

From here, click on Unfollow Kim (or whatever their name is). From now on, any of their posts will not appear in your Facebook News Feed. The only way you’ll be able to see their posts is by manually visiting their profile page.

If you don’t want to completely unfollow a Facebook friend, there is another option. 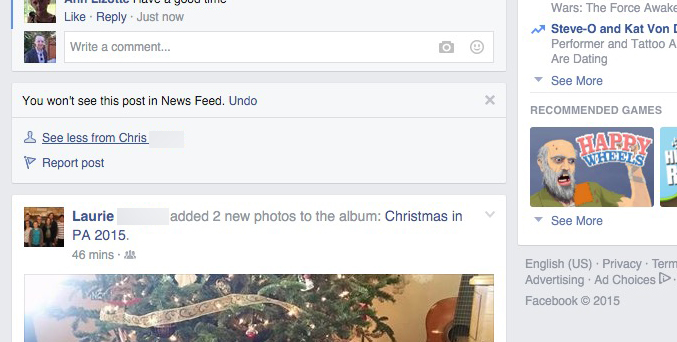 This will hide that specific post from your Timeline, but a new option will appear, allowing you to “See less from Joe”, which will hide a handful of posts from that friend, but not all of them. We’re guessing Facebook uses an algorithm of some kind to determine which posts to show and which ones to hide.

In any case, that’s all there is to it to hide a friend’s Facebook posts so that they don’t appear in your News Feed. The best part is that your friend won’t know that you hid their posts and you’ll still remain Facebook friends.