The iOS 7 jailbreak tool is now available from the Evad3rs bringing a new method that runs on iOS 7 through iOS 7.0.4 and the Gotta Be Mobile team is ready to show you how to jailbreak iOS 7 with the latest version of evasi0n.

The iOS 7 jailbreak is free to download for Windows and Mac and works on any device running iOS 7, including the iPhone 5s, iPad mini Retina and the new iPad Air.

Using the iOS 7 jailbreak is fairly straightforward, but users who are new to the process will get a step by step guide that includes photos and tips on how to avoid common iOS 7 jailbreak problems.

Keep in mind jailbreaking iOS 7 is not for everyone. We share a list of five reasons to skip the iOS 7 jailbreak for now, which we recommend reading before you take the plunge.

How to Jailbreak iOS 7 with Evasi0n 7

The following guide to the iOS 7 jailbreak will walk you through the process of jailbreaking from the first steps to the last with tips on how to enjoy the most seamless process. Some of the steps may seem pointless, but we recommend following each one in order to avoid any issues. It will take a little while to complete, but it is worth making sure you do it right.

Step 1. Back up the iPhone or iPad to iCloud or iTunes. We prefer a local backup, but either one will work. Make sure the backup completes before continuing. If you use a password on your iTunes backup turn this off and make a new backup before jailbreaking. 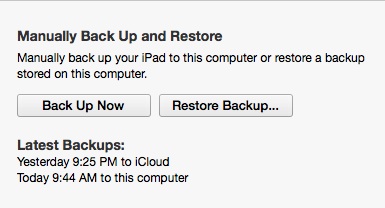 Step 2. If you performed the iOS 7.0.4 update over the air, you should restore the iPad using iTunes to avoid any issues. It may work without doing this, but the team suggests this step.

Complete the setup before proceeding any further.

Step 3. Disable any Passcode on the iPhone and just to be safe turn off Find my iPhone.

Step 4. Download the evasi0n iOS 7 jailbreak tool from the Evad3rs for Mac or Windows. When it completes double-click on it to unzip the files.

After the file is downloaded and your iPhone, iPad or iPod touch is ready we can start the actual jailbreak process.

Step 5. While you are using the iOS 7 jailbreak tool do not use iTunes for anything else. Plug the iPhone or iPad in to your computer then open the evasi0n jailbreak app on the computer. 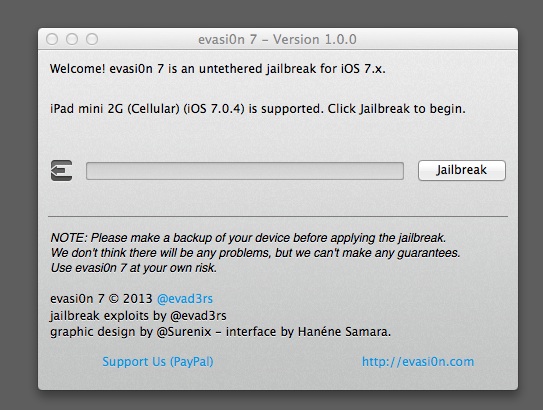 When you are ready click Jailbreak in the app on your computer and follow the directions that appear on the computer. Do not use iTunes and do not use your iPhone or iPad until told to.

If the iOS 7 jailbreak tool freezes or runs into an issue, you can reboot the device by holding the home and power button until it reboots. Once it reboots you can start the jailbreak over.

Wait as the device reboots and performs other actions.

Step 6. When prompted unlock the iPhone or iPad and tap the jailbreak button on the iOS device. Do not unplug the device and do not try tapping the app multiple times. One tap should launch a white screen and then reboot the iPhone or iPad. 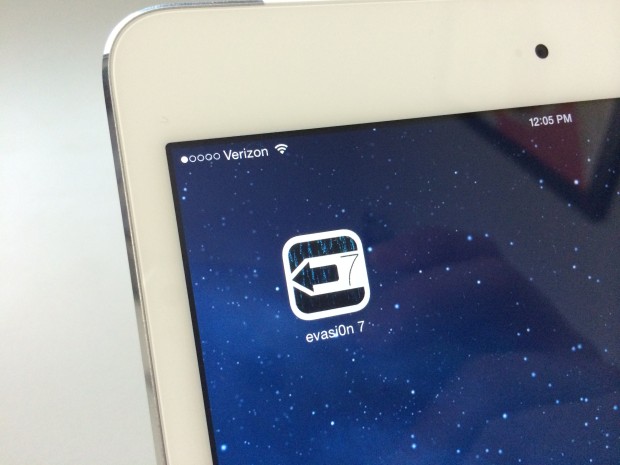 Tap jailbreak to complete the process.

Wait while the jailbreak completes. The last bit will inject the final bit of the iOS 7 jailbreak and will install the iOS 7 Cydia app that the Evad3rs include.

Step 7. When the process is completes the evasi0n tool will offer an Exit button, but the iPhone or iPad may continue to reboot. 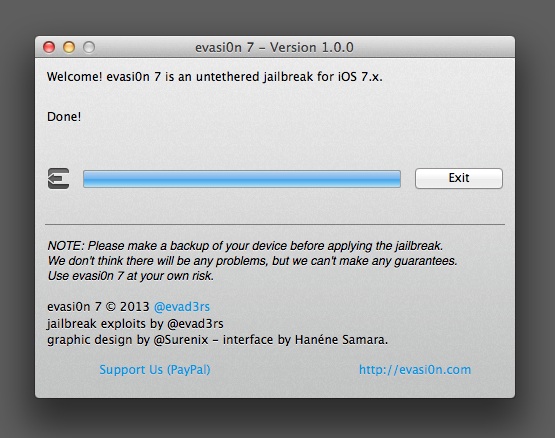 Step 8. Set up Cydia on iOS 7 to get started with iOS 7 jailbreak apps and tweaks.

Keep in mind that many of the popular Cydia apps and tweaks are not yet compatible with iOS 7 and others are not compatible with the iPhone 5s, iPad Air and iPad mini Retina which use the newer Apple A7 processor.