Is your MacBook cable on your charge breaking? You’re certainly not alone (and we have a fix), but we have a few tips that will help you avoid a broken MacBook charger cable in the future.

Most of us have experienced a broken charging cable at one point or another. They get worn out after a while of heavy use and then the cable usually starts to tear open at the ends. The cable might still work for you, but exposed internal wires are considered a safety hazard to begin with, so unless you want to wrap up the broken part with electrical tape, it’s best to throw it out and get a new MacBook charger, which can be costly to say the least.

However, MacBook chargers and the attached cable can last practically forever if you want them to. All it takes is a bit of care and general maintenance on your part and you’ll never have to replac a MacBook charger ever again (unless, of course, Apple ever changes the connector standards like they did going from MagSafe to MagSafe 2).

There are multiple ways that you can preserve your MacBook cable. There are simple methods such as wrapping it carefully every time you’re done with it, and even ways to reinforce the cable with various materials so that they won’t break in the first place, even if you expose it to heavy use. Here are some tips that may prove useful to you if you’re sick of buying new MacBook chargers.

Most incidents involving MacBook cables breaking are because the user doesn’t properly take care of the cable in the first place when they’re storing it or taking it somewhere, and it usually has to do with how they wrap the cable.

More likely than not, you probably wrap the cable harshly around the power brick and then toss it into your bag carelessly. It turns out that wrapping your MacBook cable like that can cause a lot of kinks in the cable, which can slowly degrade the wires on the inside.

Technically, the way charging cables come wrapped in packaging before you even open it up even isn’t the best way to wrap cables, so it’s best not to do it like the manufacturers.

Ideally, the best way to wrap a MacBook cable for storage is to loop it around several times and have it create a circle of sorts when it’s all done. This is called “coil wrapping” and it’s the best possible way to wrap any kind of cable, as it won’t create kinks or sharp bends. The above video does a great job of demonstrating the coil wrap with an iPhone cable.

This sort of goes along with the previous section, but it not only applies when wrapping your MacBook cables, but also when you’re just simply using them. 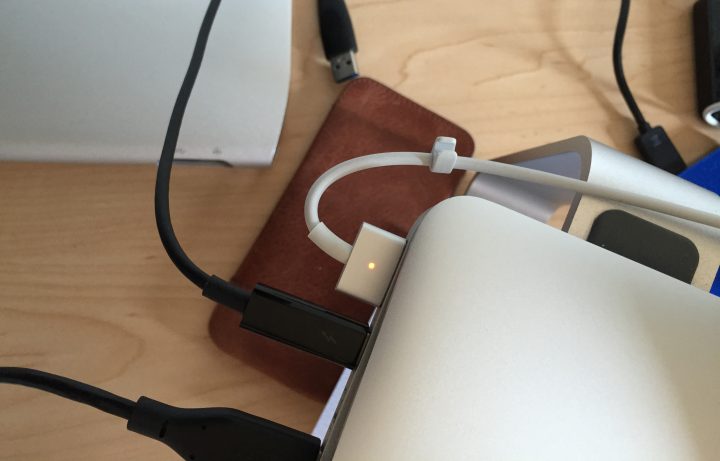 Avoid creating sharp bends in your MacBook cable whenever possible, because that’s how you can ruin the wires on the inside over time. It’s especially important not to create sharp bends near where the connector is (the cable itself meets up the bigger connector section of the cable).

That area where the cable ends and the connector starts is extremely fragile (even when manufacturers reinforce it — rather poorly at that), and with enough action, it can eventually kink and split open, exposing the wires within. Usually the cable won’t work after that, but even if it did work, it would be a huge safety hazard anyway.

So the next time you go to plug in your MacBook charger into the wall behind a couch or other piece of furniture, be aware that creating a sharp bend in the cable is never a good idea.

If you don’t feel like being careful with your MacBook charger and want to continue to use it like you normally do, then at least you can reinforce the cable yourself so that it’s less likely to break in the future. There are a handful of DIY tricks you can use in order to reinforce your MacBook cable, and there are different materials you can choose from as well. 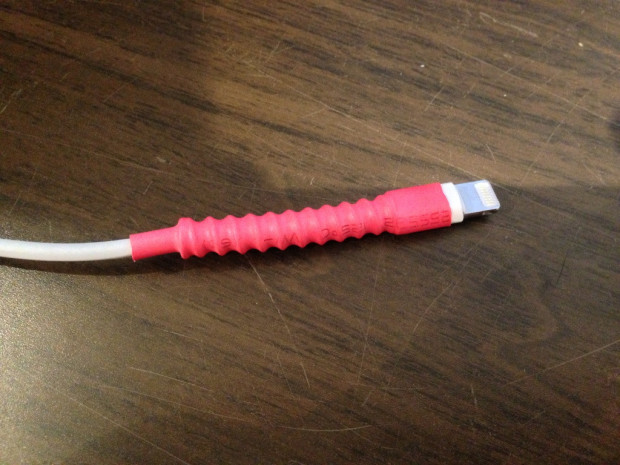 A popular option is using small springs from writing pens and fitting them onto the ends of your cables. This prevents them from creating sharp bends in the first place.

You can also use shrink tubing on the ends. You probably don’t have shrink tubing just lying around, so this probably isn’t the most convenient option, but you can choose from all sorts of colors to make your cables more festive. You can even double up with pen springs and shrink tubing for an even more reinforced cable, as pictured above.

Whatever you decide to do when it comes to preventing your MacBook cable from breaking, the most important thing is that you simply take more care of the cable to begin with. Properly wrapping your cables and storing them with care will make them last forever without any added tricks.