Hate sitting through PowerPoint or Keynote presentations? You might want to join the APPP or the Anti-PowerPoint Political Party, a Swiss political party seeking the ban the use of presentation software in Switzerland. That’s right, they want to ban PowerPoint, and probably Keynote as well.

They claim that presentations costs the Swiss economy 2.1 billion Swiss Francs, or $2.5 Billion US, each year. Their figures are somewhat sketchy, based on the idea that 85 percent of workers consider presentations a waste of time. When you take the total number of hours that the group estimates people sit through presentations at work and figure 85 percent of those hours are wasted, you get $2.5 Billion in lost productivity.

The founder of the party admits that this is a publicity ploy to sell his book. Matthias Poehm is a public speaker and is publicizing his book about the use of an alternative. “Yes, it is a tool to promote my book. But it doesn’t end there,” Poehm wrote in an email to a writer from CIO Magazine.

Below is a video from the APPP explaining their view. 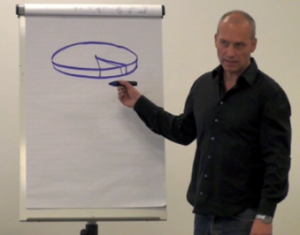 So what does Matthias say is the best alternative? The lowly flip chart: those large, often spiral, notebook-like charts or notebooks that one puts on an easel.

While the flip chart might be the perfect solution to boring presentations, I have my own suggestions that stem from my experience as a public speaker for the last 18 years as well as my own research for a doctoral thesis in religious communication. I did my thesis on using multimedia in communicating in a religious context.

What I discovered is that most people don’t hate PowerPoint or other presentation software, they just hate it when people use it poorly. So let me share how I use visuals in my weekly presentations to my congregation that also apply to business or educational settings. 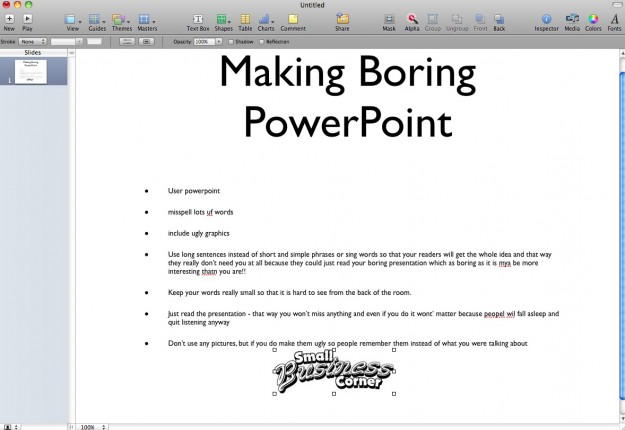 A long wordy slide is boring to look at. Instead of listing all your points word for word, do what Steve Jobs does in his Keynote addresses. He doesn’t present a long statement like, “The iPad 2 is the fastest selling tablet with over 40 billion sold in 3 minutes.” He instead shows a simple slide with a dark background and large white letters that say “40 Billion sold”. It might be next to a picture of an iPad and a clock that has ticked off 3 minutes or he might use a chart, as in the example below. 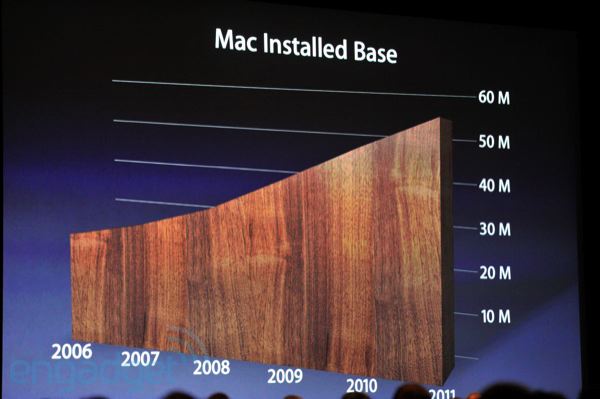 Pictures Say More Than You Do Faster Than You Can

If you can put a picture on the slide instead of words or phrases, it will communicate faster. The mind takes a few seconds to read a long sentence but it instantly registers what is in a picture and begins to process all thoughts, memories and feelings about the item. For example, in our above iPad example, people who love the iPad not only see the device on-screen, but get a warm feeling, think about their experiences with the device and their hopes for the next model. Haters instantly are disgusted by the iPad and angered by how successful it is. That all happens in less than a second as the image pops on-screen.

I still remember the story a man told in a talk to teenagers in Asheville, NC 15 years ago. The reason I remember is he brought a football jersey on stage as he told about the ending of the movie Rudy, where all of Rudy’s teammates came to the coach and said they wanted Rudy to have their game jerseys so the undersized, under-talented player could get into a game for one play during his last game in his last year at Notre Dame University. The visual reinforced his point, which was to say that the teenagers can have a powerful impact on others by their sacrificial efforts. 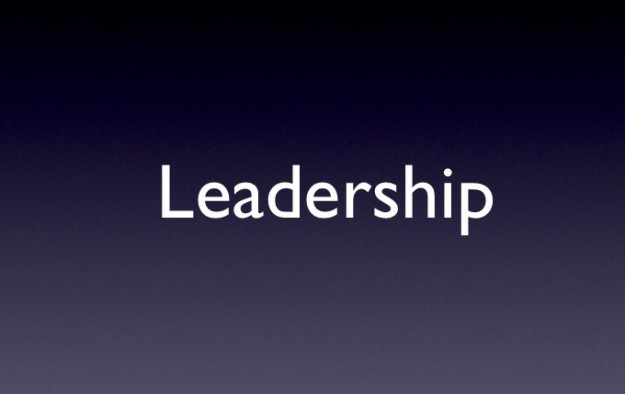 If you are making a point about leadership and want to say that as leaders we need to stretch our people without stretching them too far, then a rubber band can be a powerful visual. Don’t put a picture of a rubber band on the screen. Just display the word Leadership in big white letters and take a large rubber band out and start stretching it and maybe even break it to illustrate how pushing followers can cause them to “break”. They key to using objects is creativity. Also don’t do it too often. One per presentation is likely the effective limit.

Quality Reinforces You and Your Message

The difference between an ugly cartoonish character and a beautiful professional photograph of a person is vast. The better the quality of your slides and images the more people will focus on the message rather than the medium. When I include a tipo in a sentence you notice the typo, not the subject of the sentence. The fact that I misspelled typo with an “i” instead of a “y” in that previous sentence distracted you from my message. Have someone proofread your work. The fewer words the less likely you will have mistakes.

If you do make a typo, call attention to it and make it a joke. People are already noticing it and ignoring what you are saying for that brief moment. Calling attention to it lets everyone take a break, but then you can get them back on track. Professional communicators disagree with me. In my experience this is the fastest way to overcome your mistake. Better still, don’t make one.

If the Speech Sucks Even the Best Visuals Won’t Help

The biggest problem with speeches usually has nothing to with bad visuals. If my content is shallow, repetitive, too long or trite, I could have the greatest presentation images ever known to humankind and my presentation would still suffer.

Include humor. Don’t follow the old communication pattern below:

Whoever came up with that old idea was a horrible communicator and likely bored his or her audiences. A better pattern is as follows:

When you are finished, your audience should remember what you said, believe it is true, and understand why it matters to them. The above tips will help with the first of these goals. You will achieve the other two with your content.

And hopefully no one will want to put you in jail after you finish your presentation.