Music lovers enjoy listening to music on smartphones or tablets, but many hate the annoying cables used to connect earbuds, headphones or external speakers. But using Bluetooth, we can cut the cord while working out, taking a walk or driving.

Before switching to wireless, understand that Bluetooth audio drains the battery faster than using built-in speakers or wired headphones or speakers. However, the first time a listener jumps into their car or walks into their office, and the phone automatically connects to a Bluetooth audio system, the person won’t want to go back. We’ll show you how to do it.

How to Enable and Pair Using Bluetooth on iOS

Before hooking up the wireless audio system, the user must pair their phone. This works the same on all iOS 7 devices using iOS 7. For those on an older version, it’s almost the same, so this guide will still help. 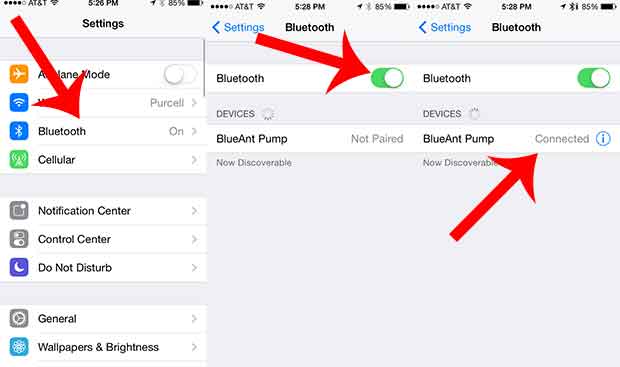 Open Settings (above left) and tap on Bluetooth. Turn it on by tapping the slider switch (above center) till it turns green. Let it discover the device and tap the device name to pair the device (above right).

Open the Settings app and tap on the Bluetooth item, third from the top of the main screen. Then turn it on by tapping the little on/off slider switch so that it turns green. The phone starts searching for a Bluetooth device to pair with. Turn on the Bluetooth audio playing device and put it in pairing mode using the device’s instructions.

Users who don’t know how to do put their device in pairing mode need to get the device’s manual and follow the instructions. Most of the time it involves holding down a power button to turn it on and keeping it held down until it moves into pairing mode. This works differently on every device, but they usually give the user an audible signal that it’s in pairing mode.

The phone and the Bluetooth device will connect and sometimes the user needs to enter a pass code of usually 4 numbers to pair the device to the phone. Most devices use 0000, so try that if you don’t know the code.

To quickly turn on Bluetooth on iOS, swipe up from the bottom and tap the Bluetooth icon.

After initial pairing, the next time the user turns on their device’s Bluetooth the audio device will usually automatically connect again. On iOS do this by swiping up from the bottom of the screen to show the Control Center. Tap on the Bluetooth icon to turn it on.

How to Enable and Pair Using Bluetooth on Android

Android devices work similarly to iOS, but the location of the Bluetooth settings vary depending on which phone or version of Android a person uses. For example, on the HTC One M7 or M8 and on recent Samsung Galaxy devices, pull down from the top of the screen to show the notification area. Tap and hold on Bluetooth which brings up the Bluetooth settings screen. Tap on Scan, and when the device shows up in the list, tap it to connect. It may ask the user to enter a pairing code on the phone or tablet. This is usually 0000. 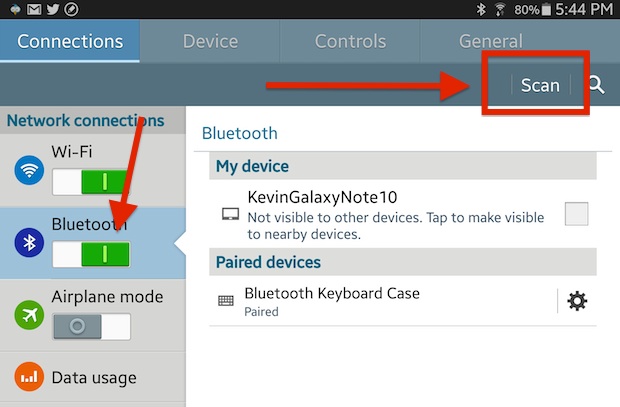 When the Bluetooth connections screen opens, make sure Bluetooth is turned on along the left and then tap Scan. Tap on the device name when it shows up in the list on the right side.

Now, whenever a person turns on the audio device, they can connect quickly by turning their phone or tablet’s Bluetooth on. It will usually reconnect automatically.

How to Enable and Pair Using Bluetooth on Windows Phone 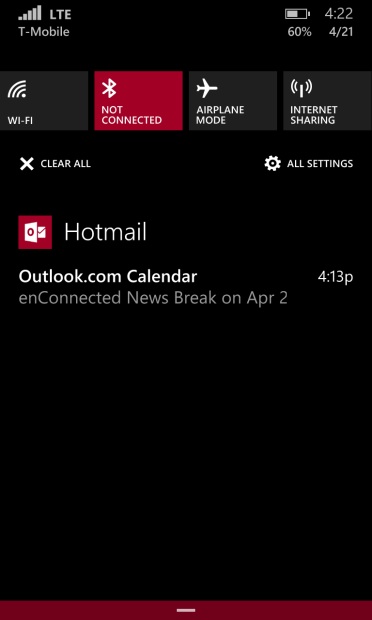 Windows Phone users should open Bluetooth Settings by swiping up from the bottom of the screen to show the Action Center in Windows 8.1. Tap on the Bluetooth icon second from the left between Wi-Fi and Airplane mode. Follow the Bluetooth audio device’s instructions for turning on Bluetooth and putting it into pairing mode. When the audio device shows up, tap on it to connect and enter the pairing code if necessary.

Bluetooth In the Car

According to Chad Kirchner, one of our experts at MotorReview.com, most new cars sold since 2010 come with Bluetooth connectivity built into their stereo systems. Drivers can listen to audio, and receive and make phone calls through their car stereo systems. That’s not always the case, especially with older cars, so drivers of cars without built-in Bluetooth will need to grab hold of a Bluetooth accessory that makes the connection between the phone and the car stereo.

For those who own a car with Bluetooth built-in, consult the car’s owner’s manuel. On my Honda CRV this is a matter of going into the Phone Setup section of the stereo system and adding a new phone to the system. It’s very simple and makes enjoying music in my car so much better than connecting to the Auxiliary input in the storage compartment between the two front seats.