iOS 6 includes a new feature that lets parents lock the iPad to a single app so kids cannot open other apps, post to Facebook or delete apps from the iPad.

The iPad is a popular tablet to hand to children for reading books, exploring virtual worlds or just watching a show on Netflix, but it’s easy for kids to get into apps they shouldn’t or to start removing apps from the iPad without controls in place.

The new iOS 6 software update includes Guided Access mode, that locks the iPad to a single app, and allows blocking certain areas of the screen or other features while the iPad is locked. This may as well be called Kid Mode for the iPad.

This solution isn’t a perfect kids mode, but it is far better than we’ve seen on the iPad in the past. Until Apple releases controls like the Kindle Fire HD, this is what we need to work with.

How to Lock the iPad to a Single App

The video below shows how to lock the iPad to a single app, aka turn on Kid Mode for the iPad. This works with any iPad running iOS 6, which rules out the original iPad.

Once Guided Access is set up, users only need to triple tap the home button to turn on Kid Mode for a specific app. The process works with any app, and even allows parents to block off specific areas of the screen from accepting touch input.

Open Settings on the iPad.

Tap on General and scroll down to find Accessibility. 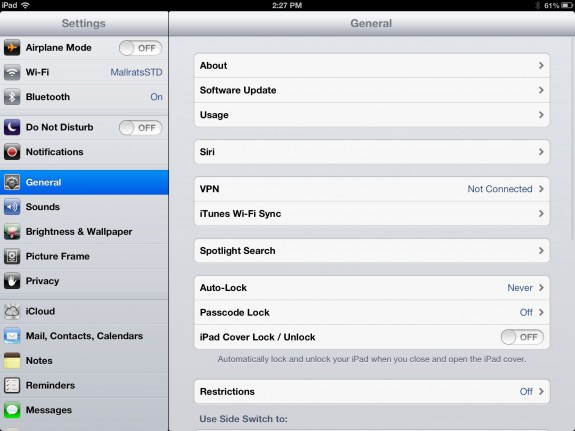 How to Lock IPad to a single app.

On the Guided Access screen toggle the switch to On.

Set a Passcode that a child isn’t likely to guess, so no “1111” passcodes here. 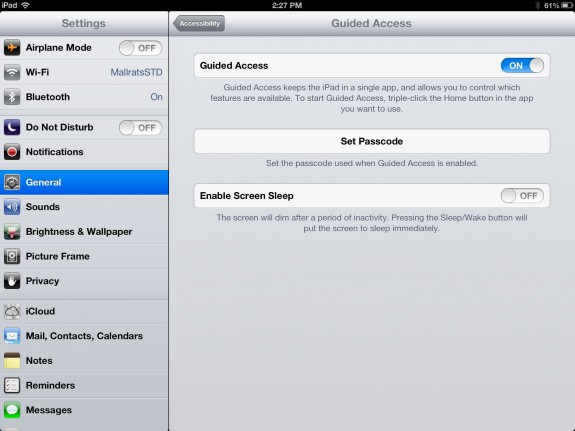 Guided Access lets users lock the iPad to a single app for kids.

Now Guided Access, or Kid Mode is ready to use.

Open the app that you want to lock the iPad to. Once the app is open triple tap the home button. This needs to be fairly fast.

From here, choose if the kid can use touch or motion controls.

It’s also possible to lock out certain areas of the screen from touch control. This is useful for blocking links to buy items or to exit a specific movie in Netflix. 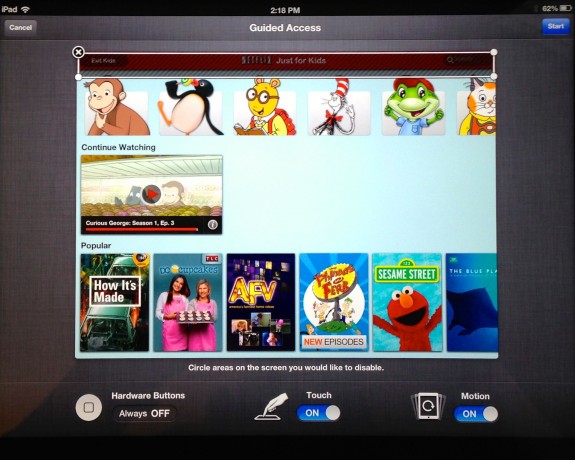 Lock a child to a specific app and disable touch in areas to keep them in a single section of an app like Netflix for Kids.

Guided access is the perfect companion to Netflix for Kids. After opening the Netflix for Kids section of the new Netflix app, turn on guided access mode and block the top part of the screen from accepting touch input. In the photo above, the top section of the Netflix app will no longer respond to touch. This means kids can pick any Netflix for kids movie, but won’t be able to jump to the main screen to watch R rated movies.

This isn’t a perfect kids mode. Restarting the iPad while holding the home button and power buttons will quit Guided Access, giving the user full access to the iPad without a passcode. This is also a good way to exit Guided Access if it doesn’t recognize the triple tap.