If you haven’t updated to iOS 8.1.3 yet, but are wanting to jailbreak your iPhone or iPad, stay where you are and don’t update to the latest iOS version just yet. Here’s how to protect your iOS 8.1.2 jailbreak.

iOS 8.1.3 was released a couple of weeks ago, and one of the biggest new “features” is that it patches up the TaiG iOS 8.1 jailbreak, officially ending Pangu’s and TaiG’s jailbreak run. Of course, users who are still on iOS 8.1.2 can jailbreak their devices, but Apple doesn’t like its users staying on older iOS versions, which means that it can be a bit difficult to keep from updating.

iOS 8.1.3 mainly just fixes a handful of small bugs, including one that now decreases the amount of storage needed when updating iOS 8, allowing users with little storage to update without getting those annoying “storage full” messages.

While we’re sure that iOS 8.1.3 will be jailbroken eventually at some point, it’s not really worth it to update to iOS 8.1.3 from iOS 8.1.2, especially if it means losing your jailbreak. Here’s what that means for jailbreakers still on iOS 8.1.2 and how to maintain your jailbreak from here on out.

Say No to iTunes

If you’re already jaibroken, the iOS 8 jailbreak is set up in such a way that it prevents your device from checking for a newer iOS update. Normally, you can go to Settings > General > Software Update and download the latest version over-the-air, but the iOS 8.1 jailbreak prevents users from doing that on their jailbroken devices, so you’re safe there. 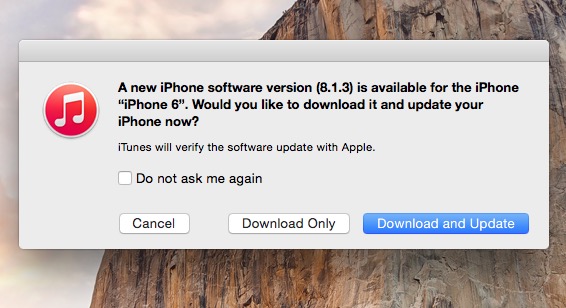 However, if you ever go to plug in your iPhone or iPad into your computer and fire up iTunes, you’ll most likely get a pop-up telling you that there’s a newer version of iOS and that you should install it.

This is where you use those skills that you learned when you were younger when your parents would teach you to say “no” to drugs and other bad stuff, only this time it’s applied to iTunes.

Since you can’t essentially wipe your iPhone or iPad and restore back to the iOS version that you were on, Apple forces you to update to the latest version of iOS whenever you want to restore. This may not seem like a huge deal, but one wrong move could put your iOS device in a bootloop or otherwise soft-brick it, forcing you to restore in order to get it back in working order. Thus, you’ll be forced to update to iOS 8.1.3 and lose your jailbreak.

This is why it’s important to not take risks with certain things on your iPhone or iPad. Don’t open up iFile and start messing around with the system files, as that’s a good way to mess something up on your device.

A great jailbreak app to install is called iLEX RAT. If your jailbroken iPhone or iPad is in trouble, you can use this app to restore your iPhone to a fresh state while still keeping the jailbreak intact. Semi-Restore is another jailbreak tweak that does this as well.

You may be asking, “Why not just go into Settings and select Erase All Content and Settings?” However, doing so on a jailbroken iPhone or iPad will result in a bootloop, for which you’ll have to do a hard restart to get back to the lock screen. The only way to restore your iPhone back to factory settings while keeping the jailbreak intact is to use special software like iLEX RAT or Semi-Restore.