How to Recycle Your Old Android Phone, Tablet and Turn It Into a Chromecast Device

Google’s Chromecast dongle for HDTVs was a surprising hit. Priced at just $35, the device quickly sold out and is now out of stock at many retail locations with delays in shipping time up to a month long. So, if you have a new Android phone, how do you ‘stream’ the content from your phone to your HDTV? One such solution involves using an older Android smartphone or tablet that’s laying around and collecting dust, and plugging that device into your HDTV. Thanks to a new app, currently in beta, called Cheapcast, which is available for free through Google’s Play Store, users can stream content from their new Android smartphone to the older phone or tablet that’s plugged into their HDTV via an HDMI connection. 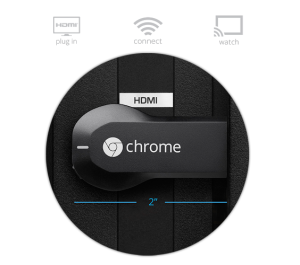 While much of the functionality of Chromecast has been replicated thanks to the Cheapcast software that’s running, you will miss out on some of the simplicity and elegance of Chromecast. For one, Chromecast is a smaller dongle that hides away on the back of your HDTV. If you use Cheapcast, you’ll have to find a way to hide your older mobile device while it’s plugged into your TV, or you’ll simply have to deal with the device being in sight next to your TV.

Also, while many of the functionality is replicated, there are still some bugs as this is beta software. The developer notes that Chrome Tabs is still not working properly.

Another use, primarily for people traveling, is that even if you don’t connect your older tablet to your HDTV, you can still stream the content on your newer, smaller-screened smartphone onto the larger display of your tablet to view and share content that way. This may be a good solution for student projects in smaller group settings or even business travelers. The developer showed the content on his smartphone being casted onto a Samsung Galaxy Note 8.0 tablet. 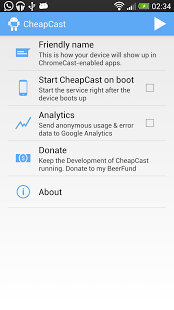 The ability to cast what’s on your phone to your tablet (without viewing onto an HDTV) is something that the $35 Chromecast dongle isn’t able to do that Cheapcast can. It might be a good way simply for geeks to get new life out of their old tablets.