In the dawn of the age of Tablet PCs there was a place where users of those devices flocked for advice, help, camaraderie, and the sharing of info: Tablet PC Buzz. In some ways it was a forerunner for this blog and for the blogging careers of quite a few Tableteers, as users of that site came to be known. New users would show up seeking help and stay around for the community. One of the  most frequently asked questions concerned the little metal ring that was included with the purchase of some Tablet PCs. What was this little metal ring for? 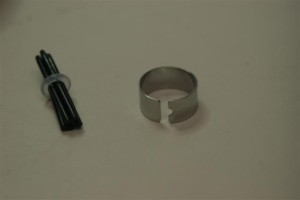 The answer was simple if not easy to figure out. You used the little metal ring like a pair of pliers to remove the nib, or the business end of a stylus, when you needed to replace one. (Most Tablet PCs also came with a package of extra “nibs.”) The “metal ring” also became a fun in-joke with Tableteers. There were rumors that the original bunch of Tablet PC MVPs assembled by Microsoft was seen wearing them as lip rings at a Tablet PC conference. Humorous suggestions about what do with the small, but useful tool, were legion. It was also known as a “secret Tablet PC “Tableteer Identifier Pinky Ring” and a “secret decoder ring” that you wore when you were without your Tablet PC so you could be identified by other Tableteers.

Samsung, with its Galaxy Note line of Tablets and smartphones, continues this legacy if not some of the lunacy. Some of the latest model Galaxy Note Tablets and the new Galaxy Note 3 have greatly improved Digital Inking capability because they include a Wacom digitizer, still the best solution for smoothly laying down Digital Ink on a screen. And yes, those devices come with a stylus that contains a removable plastic stylus with a removable plastic tip or “nib.” Samsung calls its stylus the SPen. 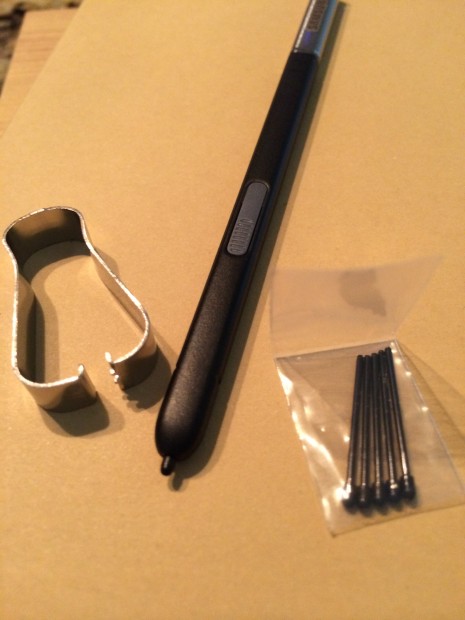 The Galaxy Note 3 Stylus with extra Nibs and Metal Ring

In the box for those devices comes a small package with a little contraption that looks more like a small metal pincher than a metal ring of hold. There are also five extra “nibs” as we used to call them. Why do you need them?

The answer is that the “nibs” can become nicked or worn down over time. They are plastic. Imperfections can lead to a less than smooth Inking experience. Don’t ask if there is some sort of regimented period of time when one should replace a nib, because it was never agreed on or specified back in the day. 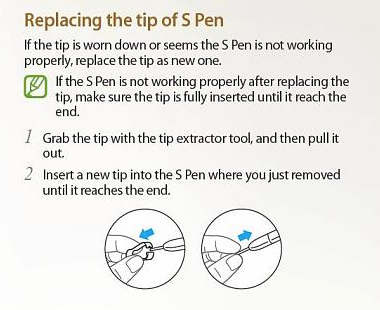 How to Replace the Stylus Tip for the Galaxy Note 3

Samsung may call this a “Tip” but given that I’m a Tableteer from way back, I’ll stick with “nib.”

By the way, if you’re seriously interested in Digital Inking on a Tablet, you should head to a retailer and ask them to let you test a Samsung Tablet with a stylus. You’ll have to ask because the pens are usually hidden away to keep them from “walking away” on the store floor. Samsung has a small assortment of Inking Apps that are designed to work with these devices. It’s a shame we haven’t seen real development in Apps that take advantage of the SPen and the technology Samsung is building into these devices. Yet. There is an SPen SDK available.