Whether you want to just start from a clean slate, you’re selling your jailbroken iPhone, or you screwed something up on the software end, you’ll want to completely restore the device. However, restoring your iPhone through iTunes will force you to update to iOS 8.1.3, and since this latest update isn’t jailbreakable yet, you’ll want to stick with iOS 8.1.2.

Luckily, there’s a way to restore your iPhone while keeping your iOS 8.1.2 jailbreak intact.

You may be asking, “Why not just go into Settings and select Erase All Content and Settings?” That’s a valid question, but doing so on a jailbroken iPhone or iPad will result in a bootloop, for which you’ll have to do a hard restart to get back to the lock screen, and you’ll be back to where you started. The only way to restore your iPhone back to factory settings while keeping the jailbreak intact is to use special software.

Both of these apps accomplish the same thing in the end, but they each use different methods that users may prefer over the other.

With iLEX RAT, you simply download the app from Cydia and run the Restore feature on your iPhone using the app. You don’t have to plug the device into anything, which is a really nice convenience to have.

Here’s how to use each piece of software.

With SemiRestore, there’s nothing that you need to install on your iPhone. All you need to do is download the Semi-Restore program onto your computer and run it with your iPhone plugged in. As of this writing, Semi-Restore really only works on Windows and Linux machines. You can get it running on OS X, but you have to download the Linux version and create a Live USB version, which is more work than necessary if you have a Windows machine nearby.

You’ll also want to make sure that your iPhone has OpenSSH installed, which can be downloaded through Cydia.

Once the Semi-Restore program is downloaded, extract the .ZIP folder and you’ll see that there are two files. One is a .DLL file and the other is an .EXE file. Double-click on the .EXE file to open up the program. Make sure your iPhone is plugged in and then click Restore.

Let the program do its thing, and your iPhone will eventually reboot and restore. You’ll then see the iOS Setup Assistant appear to indicate the device has been officially restored to factory settings, while still keeping the jailbreak intact.

How to Use iLEX RAT

To use iLEX RAT to restore your iPhone to factory settings while still keeping the jailbreak, follow the simple instructions below.

What you’ll want to do first is install iLEX RAT from Cydia. To do this, you’ll need to add a repo first, if you don’t already have it. Open up Cydia and tap on the Sources tab at the bottom, then tap Edit in the top-right corner. Now tap Add in the top-left corner and type in the following URL into the text box: https://cydia.myrepospace.com/ilexinfo/. Tap on Add Source to officially add it to your repo list. 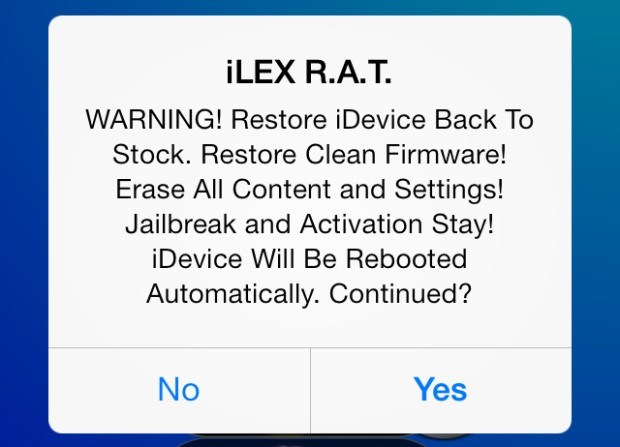 Now search for iLEX RAT in Cydia and several options should pop up. Be sure to select the one that just says iLEX R.A.T.. Once installed, open up the app and tap on iLEX RESTORE to begin the restoring process. You’ll get a warning pop-up that tells you that you’ll lose all of your data and settings. If you’re okay with this, just tap Yes to begin the process.

Your iPhone will reboot and you’ll eventually be brought to the iOS Setup Assistant. Go through this process to get to the home screen and make sure that you see the Cydia icon on the home screen. Sometimes, iLEX RAT will hide the icon for some reason, but it will still be installed (and can still be accessed by going into Safari and typing in Cydia:// in the address bar). If this is happening to you, using SemiRestore will usually fix the problem. Otherwise, you can try restoring again using iLEX RAT.