Apple officially released iOS 7.1 and that means new features and better performance for those who update. However, if you’re using the iOS 7 jailbreak, you’ll have to stay put, since the Evasi0n7 jailbreak isn’t available for iOS 7.1.

With that said, it’s best for you to stay away from any iOS updates on iTunes and that includes the Restore feature. Restoring your jailbroken iPhone will delete the jailbreak and update it to iOS 7.1. Why is that? Because Apple released iOS 7.1, it’s no longer making available past updates, including iOS 7.0.6, so users can’t simply restore their iPhone and keep their current iOS version that they’re using. It sounds cruel, but that’s how Apple does things.

You probably won’t find a reason to voluntarily restore your jailbroken iPhone, so you’re safe for the most part, but the risky thing about jailbreaking is that you could always download and install a tweak in Cydia that randomly screws up your phone. Reddit user Pls_txt_me says it best:

“Be careful installing any package now because you can’t restore through iTunes if things go badly wrong. Some packages can cause problems even if they’ve been checked and other people don’t have problems.”

However, there’s a Cydia app that can fix all of this. It’s called iLEX RAT and it provides restore functionality for jailbroken devices. Essentially, if a Cydia tweak that you installed is giving your iPhone some problems, iLEX RAT removes all installed tweaks and jailbreak-related files except Cydia itself, getting rid of any problematic tweaks that might have caused the issue. 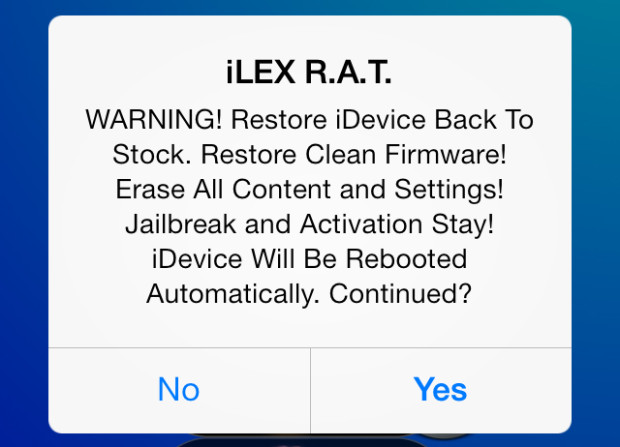 To install the app from Cydia, you’ll need to add a repo. To do that, tap on the Manage tab at the bottom, then tap Sources and hit Edit at the top. Now tap Add and type in the following URL into the text box: https://cydia.myrepospace.com/ilexinfo/.

Now search for iLEX RAT in Cydia and several options should pop up. Be sure to select the one that has iOS 7 in parentheses. Once installed, open up the app and tap on either iLEX R.A.T. or iLEX RESTORE to begin the restoring process.  The first option will keep all content and settings intact on your iPhone, while the latter will essentially factory reset your iPhone, but both options will keep the jailbreak intact.