It isn’t as easy as some of the past methods of rooting the Barnes and Noble Nook Color, but it gets the job done. A tool called Manual Nooter has been posted at the XDA Developer’s Forum which can be used to root your Nook Color even with the latest 1.2 software update. Why would you do such a thing? Imagine being able to run Amazon Kindle on the Barnes and Noble Nook Color. That is just one of the many apps you could run after rooting the device. 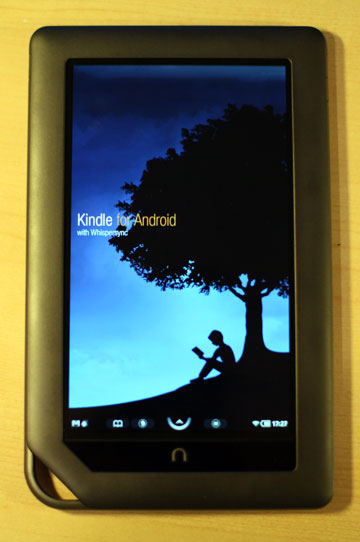 The first thing you will have to do is get the latest 1.2 update, which you likely already received automatically when Barnes and Noble sent it out a couple of weeks ago. If not manually download it from the Barnes and Noble site. Once you get the update, you will also need to have a micro-SD card which is used to install the modified firmware. Of course, you will need to have a Nook Color already registered with Barnes and Noble. We recommend registering it with a Gmail address. It makes things simpler. If you registered with another email you can still root it, but it is not as easy to get all of the Google goodness that comes with Android after the root process is performed.

First, prepare the SD card with something called ClockworkMod. It is all explained in the XDA Developer’s Forum. In step 3 of the link it says, “Burn the SD card as instructed.” The problem is the linked instructions are for Windows only. If you have a Mac or Linux follow the steps at the Nook Devs Wiki. They also have Windows instructions for making an SD card from an IMG file. About half way down the page there are some highlighted sections. The yellow part is for Linux, darker blue for Windows and lighter blue for Mac. Follow the steps substituting the name of the IMG file you download from the above linked XDA Developer’s forum post.

This process involves the command prompt or Terminal in Linux or Mac. If you are uncomfortable with either, call a geek or just enjoy your Nook Color as it came from Barnes and Noble.

Once you have the SD card prepared continue with step four in the guide at XDA to finish preparing the SD card. Now you are ready to actually perform the rooting process on the Nook Color. The steps for applying Manual Nooter from the SD card is also at XDA Developer’s Forum. The result is a rooted Nook Color.

Realize that this will alter your Nook Color. You can restore it to factory settings with some effort. It is really hard to destroy your Nook Color so even if you get into trouble there is almost always a way out. To start over follow the steps the following two pages:

This is not the only way to get a rooted Nook Color. If you want to play around with a combination of Honeycomb and another root mod called Phiremod, you can create an SD card that will dual-boot the two systems without ever changing the stock software on the Nook Color. The operating system runs like a Live CD only from the SD card. After following the steps in the XDA post you will have access to the dual-boot environment. This is not as stable as installing the above Manual Nooter, but it is also better if you want a Nook Color that is not modified at all.