How to See Which Apps Are Using Your MacBook Battery Life

However, while nine hours for the MacBook Pro is more than impressive, there are times where we need to squeeze out just a bit more juice out of the battery, especially during situations where we’re not near an outlet where we can easily charge it.

While there are a myriad of factors that go into determining how quickly your MacBook’s battery will drain, it’s important to note that certain apps hog more resources than others, thus draining your battery quicker, so here’s how to determine which apps on your MacBook use up the most battery and how you can stop these battery-hogging apps from causing any more damage.

The Simplest Way to Check

The easiest way to see which apps are using up the most battery life on your MacBook is by clicking on the battery icon up in the menu bar in the upper-right corner of the screen. Clicking on that will display a pop-up that will show you Apps Using Significant Energy. In other words, these are apps that are using up a lot of energy and your MacBook has determined them to be resource hogs and battery gobblers. 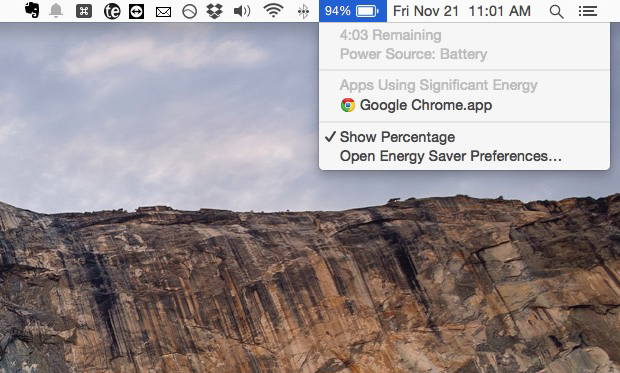 As you can see from the screenshot above, Chrome is the only app on my MacBook that is using up a significant amount of energy, which really isn’t too surprising to see since Chrome has never really played nicely with OS X, but Chrome is the only web browser I’ll ever use, so I’m keeping it around even if it does chew up battery life.

However, Chrome was recently updated with 64-bit support in OS X, suggesting that the web browser will come with better overall performance and less battery hogging.

Of course, most newer Macs are 64-bit compatible, while older Macs are on 32-bit, and since Google is retiring the 32-bit version of Chrome for good, that means some older Macs won’t be able to update to this latest version. This includes first-generation Intel Macs.

While Chrome for Mac has bogged down OS X machines for years, OS X Yosemite seems to be the biggest offender. OS X Yosemite was released last month to much fanfare, and while many users were excited to install the new operating system and try out the new features, there were quite a few Mac users who had a less-than-steller time with OS X Yosemite, especially if Google Chrome was in the picture.

There will come times when an app will mysteriously consume a ton of resources, whether it’s because of a bug in the app, or if it’s just being used without the user noticing. An app like this can seriously have a huge effect on battery life, not to mention overall performance of your MacBook at that given time.

However, you can keep things under control and spot these resource-hogging apps by using Activity Monitor, which is a built-in feature of MacBooks. Simply navigate to Applications > Utilities > Activity Monitor to open it up. Once it’s open, select the CPU tab.

Sort the apps by CPU percentage with the highest percentages shown first, if it’s not already sorted that way. This will tell you which apps are being resource hogs. Usually anything in the 60-70% range and higher is pretty resource-heavy. Click on the app and hit the Quit Process button on the upper-right corner of the app (it looks like a stop sign with an X in the center) or just quite the app as normal, by right-clicking on it in the dock and selecting Quit.

If an app you heavily rely on is a big battery life offender, there’s really nothing you can do other than to try and find an alternative app that hogs less battery life. For instance, Safari is the best web browser when it comes to battery life, so if you don’t have any close ties with Chrome, switching to Safari might be the best way to go in order to save battery life on your MacBook.