If you’re preparing to buy the new iPad Air 2 and are looking to get rid of your iPad Air, here are a few ways to sell it for as much money as possible. We have a few tips that you may find handy once you decide to walk out into the deep, dark world of iPad selling.

There are multiple ways to sell your old iPad, from using eBay to taking advantage of trade-in programs, and numerous companies are getting in on the trend, since they know selling old gadgets is big business. However, with all of these different options available, it can be hard to figure out which one is the best one to use when it comes time to sell your iPad Air.

We’ll give you a few tips to keep in mind when you’re ready to sell your iPad Air, as well as how to prepare it for selling in the first place.

Before you even sell your old iPad, it’s important to erase all the data from the device. We have a thorough how-to guide on how to do this for the iPhone (it works on the iPad as well), but simply put, to reset all settings and erase all the data on your old iPad, open up the Settings app and navigate to General > Reset. There are six options to choose from, but you’ll want to select Erase All Content and Settings. 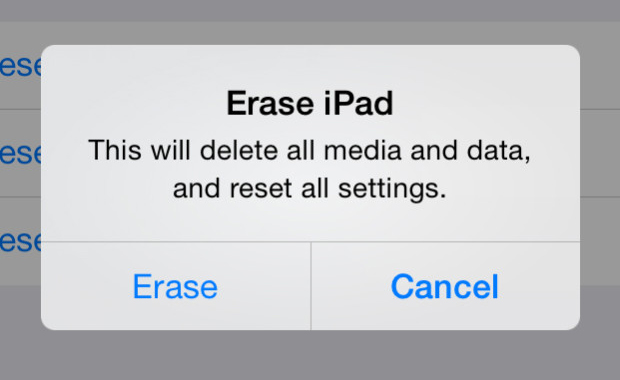 You’ll be asked to enter in your passcode, and then you’ll get a final prompt confirming the action. Tap Erase iPad to begin the wiping process. Let it do its thing, and if completed successfully, you’ll eventually see the iOS Setup Assistant upon startup.

Your iPad is now ready to sell, and from there, you can just shut the device off by holding down on the power button and then sliding the on-screen prompt to shut it off.

Then again, selling locally can be kind of a crapshoot as well, but it’s a lot easier than selling online, and you can get paid in cash straight up without having to pay any fees.

Arguably, the most popular local selling option is Craigslist, but you can also send a shout-out on Facebook and see if any of your friends would be interested in buying your iPad. This is where networking comes in handy.

There are many businesses dedicated to allowing users to trade in their used iPad for quick cash, and even a lot of retailers and carrier stores are getting in on the action as well. If you don’t want to hassle with selling your old iPad yourself, trade-in programs can save the day and make it easy to get rid of it. However, trading in your iPad is a big mistake, and you’re missing out on a lot of cash.

As an example, Gazelle will give you $280 for a 32GB WiFi-only iPad Air that’s in “flawless” condition. On eBay, you can easily get at least $400 for that same model, with some auctions that I saw reaching as high as $450 at times.

First of all, the idea behind trade-in programs is that they offer you cash for an old iPad and then turn around and sell it to someone else. They need to make a profit from doing this, so they usually give you way less than what the iPad is truly worth, that way they can make money when they sell it used to someone else for a decent price.

As sketchy as this sounds just from reading that, it’s not illegal or anything, and the benefit of using trade-in programs is that it allows users to just quickly get rid of their old iPad without any hassle, and getting some cold hard cash in return is something that’s quite fulfilling in the short term.

Swappa is rather unique in that it’s an online market for selling your old smartphones and tablets, and it’s really easy to use; just write up a description, fill in the required boxes about the condition of your iPad, take a few pictures, and hit submit.

The best part is that Swappa only takes a $10 cut from the sold price of your old iPad, rather than a percentage, so it doesn’t matter if you sell your old device for $100 or $300, Swappa will only take $10 either way.

Plus, Swappa checks every single device’s serial number to see if it’s been stolen or not, and if it has, the website doesn’t allow it to be sold.

eBay can be a great place to quickly get rid of your old stuff since there are millions of users who use eBay daily, so you’re bound to get bids on your iPad if you list it.

However, you’ll get hit with fees left and right. The biggest ding is a “Final Value Fee” that takes 10% of the selling price of the item (including shipping), so you only get 90% of the money you sold it for.

This means that if you sold your iPad Air for $400 on eBay, you’ll only get $360. This means that you’re paying eBay a whopping $40 for a single listing. This is where Swappa is the better option when it comes to fees.