How to Send A Text in Hangouts

Last year a lot of changes occurred and new featured were added to Google Hangouts. Google’s own chat service similar to WhatsApp and many others. Google Voice was integrated so you can make phone calls, and they even added the option to use Google Hangouts as your default text message app on Android smartphones. Unless you buy a Nexus smartphone most carriers or manufacturers have their own text app, but if you want to use Hangouts for all of it, here we’ll explain how.

Google Hangouts is typically just used as an online messaging app similar to WhatsApp, BBM, Line, GroupMe, or any of the other messaging applications, only it comes on all smartphones, tablets, and can be accessed right inside Gmail from computers and more. Making it cross-platform abilities extremely useful.

There are many text message app alternatives aside from what comes installed on your new Galaxy S6 (or any smartphone) and our link above goes over a few of the best. That being said, if you’d like to use Google Hangouts for all your messaging and text (SMS/MMS) needs, that’s now an option worth considering. 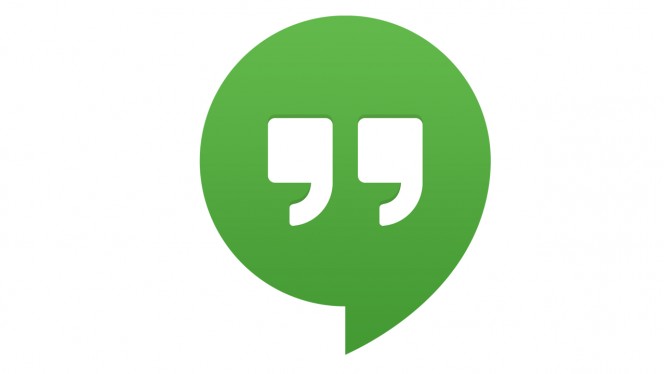 To be honest I’d rather keep my online messages and my text messages separate. So I use Textra as my regular messenger app of choice, and Hangouts while on the computer chatting with friends and family. However, some may want everything in one convenient place, which is why Google added the feature.

In our opinion using Google Hangouts as your default text and picture message app isn’t the best experience. Everything is a little confusing and convoluted, and it doesn’t have nearly the customization or settings available that most text apps deliver. That said, it can be done with just a few taps in settings, so lets give it a try.

Those with a new Galaxy S6 or HTC One M9 probably have the Samsung messenger app, or HTC’s own messages app set for the default messenger app. With Android 5.0 Google even released their own, which in a way replaces Hangouts too. So the options are endless, and Google letting us use Hangouts isn’t making things any easier to do, or understand.

Then carriers add their own too. Verizon phones come with Verizon’s own messenger+ app, one which many often replace for the stock Samsung app, or one from the Google Play Store like Textra, GO SMS, and others. But, if you still want to try using Hangouts for everything here’s how to do it.

Head into settings by pulling down the notification pulldown bar and hitting the gear-shaped icon, or just find settings in your app tray. Near the top of settings on almost all devices you’ll see WiFi, Bluetooth and a few options, then “More“. This is where you manage what app is the default text app on any smartphone.

So you’ll head into settings > more > default messaging app > and select from the list. My Verizon Galaxy S6 has four, as I’ve downloaded a few, and simply select Hangouts as your text messaging app.

Once you fire up Google Hangouts, you can send texts to any of your contacts. It may require you to accept the terms and port your number, but it’s all easy and explains what’s going on right on the screen. Sadly, it displays an email address first and the number second when trying to compose a message, so I often find I’m hitting the wrong one and can’t send a text. However, once you confirm your number and sync contacts, you can choose to send a Hangout, or an SMS at any given time with the little button on the left of any conversation right above your keyboard.

You’ll now see all your regular Hangout messages (if you use it) as well as your regular texts. If you chat with someone on Hangouts and text them, you can merge the conversation together, which is about the only thing I find useful about using Hangouts for sending texts. There is a little icon distinguishing the message as a text or a hangout, but it’s still a bit convoluted and not our favorite.

As you can see above I now have both options. I can send a regular text to any contact, or send it as a Hangout message. It’s convenient, but also a bit confusing. It’s a good idea to head into Hangouts > Settings > SMS > and go through the settings and options. Set a ringtone or notification, group messages together, merge conversations (if you’d like) and more.

That’s all there is to it. All you need to do is set Hangouts as your default text message app, make sure the settings are correct in the app and it syncs your contacts, and you’re all done. You can now send texts through Hangouts instead of the default SMS app on your phone, and quickly toggle to regular online Hangout messages and back with ease. It’s a nice idea for some, but too convoluted and feature-lacking for others. If you’re interested, give it a try today, or just download one of the apps from our Best apps post linked to at the top of the page.