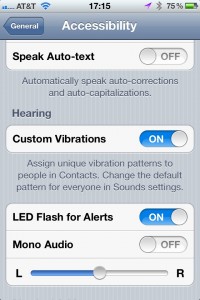 Throughout the iPhone’s evolution there has been much discussion about the design and the late Steve Jobs’ desire for a clean piece of hardware that had few buttons, no indicator lights and such. In fact there was some speculation that the iPhone’s home button would disappear on the still to be seen iPhone 5 or whatever that will be.

One of the things that some Blackberry users (and even one Pre user) have mentioned to me is that they miss indicator lights when they move to the iPhone. Well, there is a way to get an indicator light of sorts if you want one. Here’s how.

Then scroll down until you find LED Flash for Alerts and turn it on.

What this does is it causes the LED flash normally used for the camera to flash when you have an Alert come in. Of course the LED flash is on the back of the phone so if it is sitting on your desk or any other surface you won’t see it. It also only flashes for a few seconds when and Alert comes in and doesn’t keep flashing to remind you that you haven’t paid attention to the Alert yet. So, I won’t say this is a great solution if you’re missing your indicator light, but it will light up your shirt pocket in a pinch.

I don’t have an iPhone 4 anymore so I don’t know if this works on that device with iOS 5 or not, but it does work with the iPhone 4S.