The Google Chromecast, now called Google Cast, creates an inexpensive wireless receiver for video and other content.  Apps and phones with Google cast support built-in wirelessly send the video or other content to a TV or projector connected to the Chromecast.

In this setup guide, we’ll show users how to hook up their Google Chromecast to a TV or projector and then use the Google Cast app (Free for Android and iOS) to set it up and configure it. 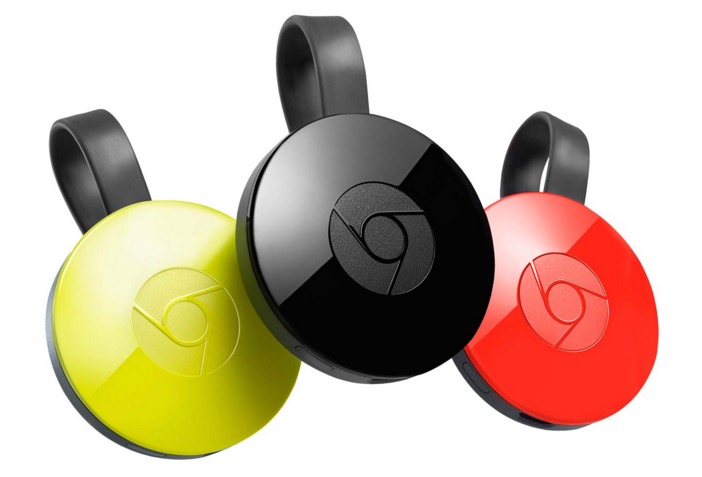 How to Connect the Google Chromecast to a Display 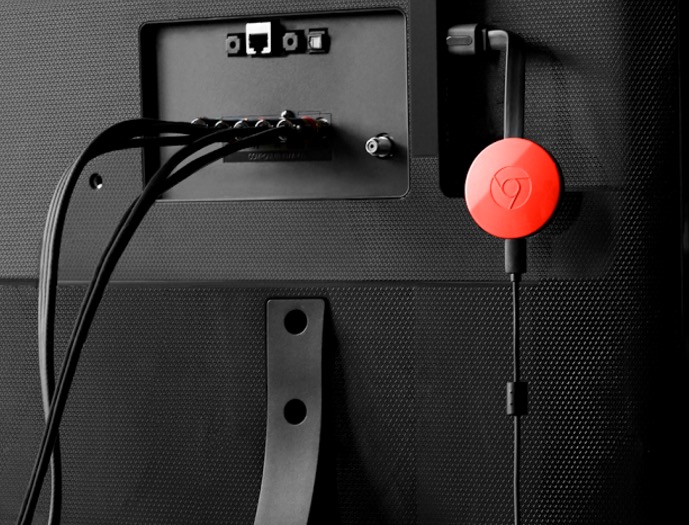 Power on the display and set the display’s input to the HDMI port connected to the Chromecast. It should show the following screen. 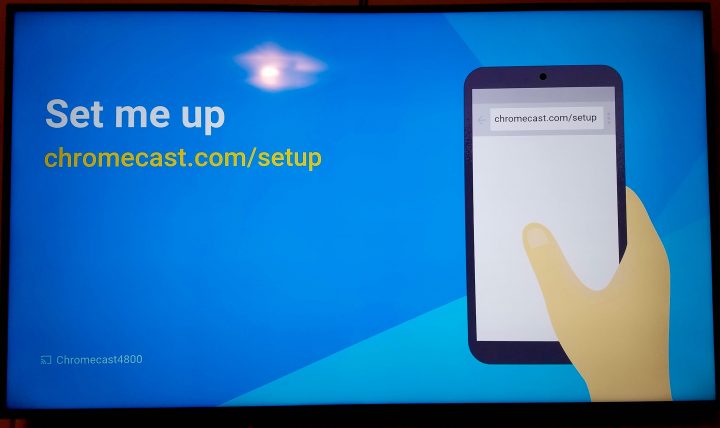 Install the Google Cast app on your phone or tablet. Users can do this from an iPhone, Android smartphone, iPad or Android tablet. We’ll show users how to do it with an Android phone, but the screens will look the same on an iPhone or tablet. 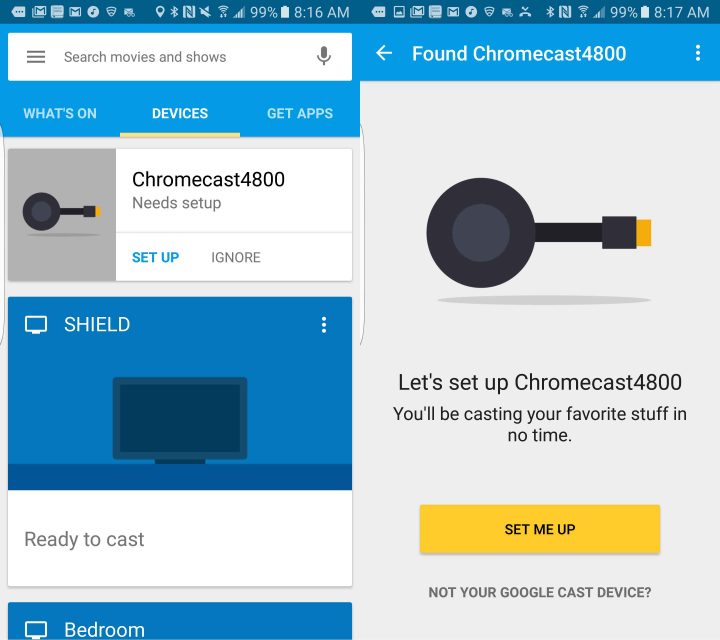 Fire up the Google Cast app and you’ll see something like the screen shot on the left above. It shows the Chromecast name usually with a number after the word and it reads “Needs setup” below the name. Tap on SET UP to get started.

If the Chromecast doesn’t show up, check a few things.

If none of the above works, you could have a defective Chromecast. Contact Google customer support.

On a working setup, the right screen shot above shows up. Tap on SET ME UP. 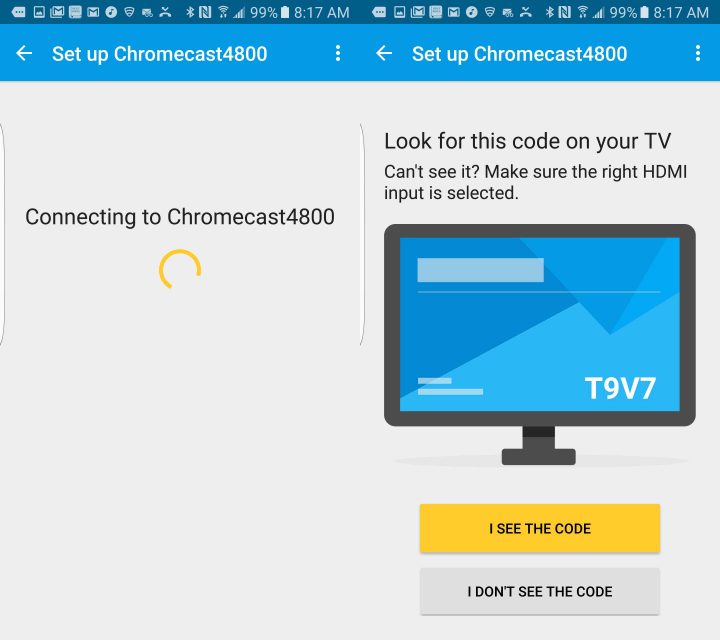 The app shows the screen on the left above as it tries to connect to the Chromecast. On the TV you’ll see the screen below. After the app connects to the device, it will show the code, unique to each Chromecast. Tap on I SEE THE CODE if you see it. If you don’t tap on I DON’T SEE THE CODE (see the above right screenshot). 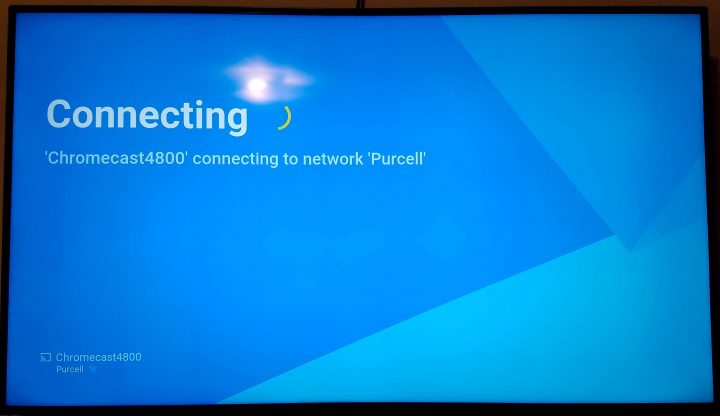 After tapping I SEE THE CODE, the screen on the left below shows up on the app. 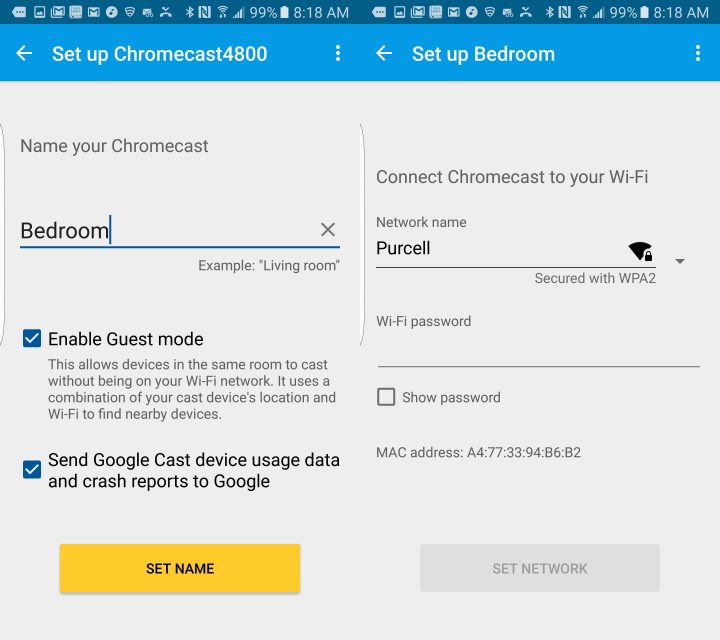 Enter a unique name. I chose to name the Chromecast by the place where I’m installing it.

The app offers two options to turn on or off.

After naming the Chromecast and turning on or off the above options, tap on SET NAME to save the name to the Chromecast. The right screen above shows up on the app. This screen lets the user choose a Wi-Fi network. Tap the drop down arrow to select from available networks. If the network uses password protection, enter the password here. Tap on Show password to make it visible to check if it’s correct. Then tap on SET NETWORK. When the app finishes adding the network, users will see the screen below on their display. 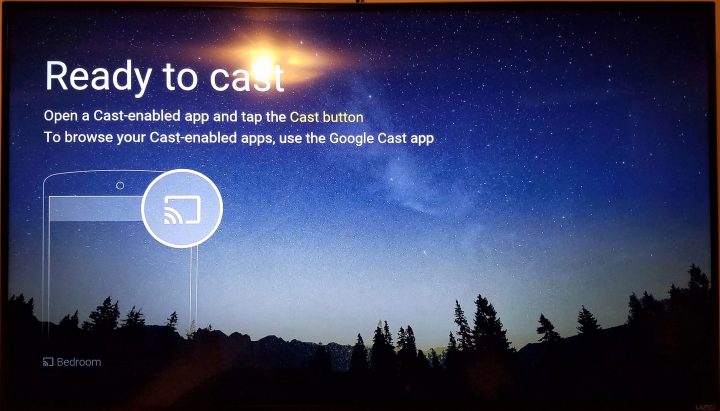 The “Ready to cast” screen means the Chromecast is ready to receive video from the phone or tablet. If the connection process fails, you’ll may see the screen below on the left. This happens when the app won’t connect to the device to begin with. 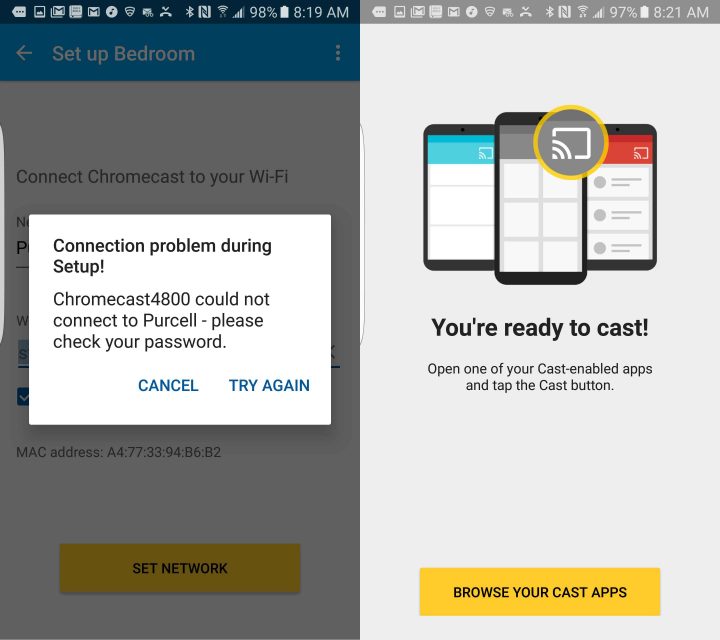 After the user correctly changes the name and then adds the network information, the above right screen shows up on the app. Users can find apps that include Chromecast support by tapping on the BROWSE YOUR CAST APPS button.

There’s one more step to set things up. The Chromecast includes beautiful images that show up on the screen when the user is not casting anything to the Chromecast. This includes art photos, images from space of earth, and more. The Google Cast app calls this the “backdrop settings”. We created a guide for changing the backdrop settings for users to follow.

How to Cast to a Chromecast

When it’s time to cast video to a Google Chromecast, open the app that includes Chromecast support, start the video and tap on the Cast button on the video.

Users can also cast to the Chromecast without connecting to Wi-Fi using Guest mode. The video below shows users how to set it up and use it.

Once the Chromecast is using Guest mode, users can cast to the device from their phone or tablet using an app that sends video to the Chromecast. It doesn’t work in some apps, like Google Slides. It does work in things like YouTube, Netflix and other video apps. It also works with audio apps like Google Play Music.