Apple how to iPhone

How to Shoot Slow Motion Videos with the iPhone 5s

I own and use a number of very expensive professional DSLRs and video cameras. Even though they cost thousands of dollars, I still prefer to use my iPhone 5s to shoot video of my friends and family because it’s easier to edit and share directly from my phone. My fancy professional cameras I use the most don’t even have slow motion mode, which is another reason why I reach for my iPhone 5s  rather than my Nikon or Canon cameras.


Here is an example of a  slow motion video I shot of my son at the park with the iPhone 5s. One thing I love about shooting slow motion videos is that it can make really ordinary things much more interesting than a photo or standard video. It’s also much easier to capture a moment in slow motion than trying to snap a photo of a moving object at a precise moment.

The iPhone 5s is currently the only iPhone that can shoot slow motion video. Other iPhones, including the iPhone 5c,  iPhone 5 and iPhone 4s don’t have the slow motion mode even though their camera apps look nearly identical to the latest iPhone.

This article is in four parts:

Before you start shooting slow motion videos with your iPhone 5s it’s important to understand how it all works. Digital videos are simply still frames flashed before your eyes in rapid succession. Standard video is recorded and played back at 30 frames per second (fps). In order to create a slow motion video, you need more frames so that there are enough frames to spread out over time. If you don’t capture enough frames, your eyes will detect jerky movement. To smoothly slow down video, the iPhone 5s records 120 frames per second in slow motion (slo-mo)  mode. The 120 frames that are recorded in one second can then be played back over four seconds, stretching each second of recording out long enough for viewers to catch all the details.  Each frame also records audio through the microphone on the back of the iPhone 5s.

This is an example of what a video shot in slow motion mode looks like at full speed. My son is spinning too fast in the video to really capture his emotion.

And here’s what the action looked like in real-time. Notice how you can clearly make out his expression as he spins around and fall. In the slow motion version my son has what my sister-in-law called ‘pure joy’ when she saw it on Facebook.

The iPhone 5s has a faster processor that makes it possible to process all of this information quickly so you can quickly record, view and edit slow-motion video. Unfortunately, the iPhone 5c and older models rely on slower processors that can’t keep up with the demands of slow motion video. While the latest iPads have the same speedy processor as the iPhone 5s, Apple offers a pared-down Camera app on the iPads that doesn’t include Slo Mo mode or Panorama mode for taking landscape photos.

One thing to be aware of before shooting slow motion videos with the iPhone 5s is that they can take up quite a bit of storage space, so make sure you clear of some space before you go shooting. This probably isn’t a problem for most users that have a 64GB iPhone 5s, but it could be a problem for those with 16GB or 32GB models.

The slow motion video is recorded at 720p rather than the maximum 1080p used during normal video recording. That means the video quality won’t be as clear as what you’ll see when recording in standard video mode.

How to Shoot Slow Motion Videos with the iPhone 5s 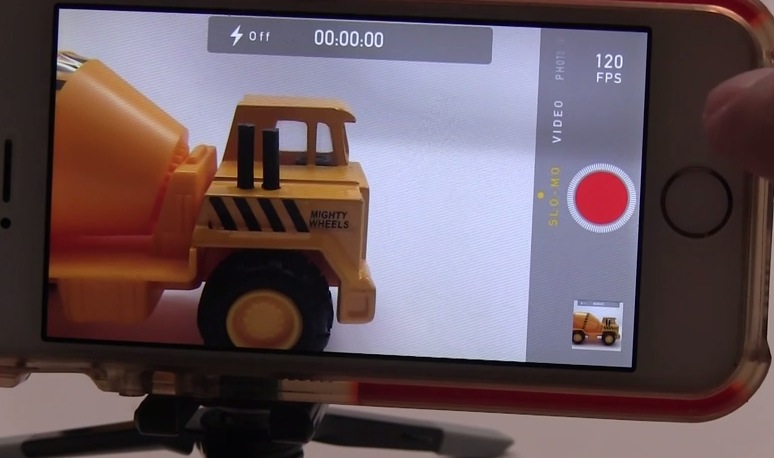 To take slow motion videos all you need to do is launch the Camera app on the iPhone 5s and swipe one finger on the screen up two times. The first time you swipe on the screen  will put the iPhone into video shooting mode. The second time you swipe will put the iPhone 5s into Slo Mo mode. You can confirm that you’re in slow motion mode because the words SLO-MO will be in yellow letters to the left of the record button. Text that reads 120 FPS will appear in the top right corner of the display.

To begin recording simply tap the red record button. The iPhone 5s will record video at 120 frames per second, though the live video you’ll see on your iPhone will still be in real-time.  For best results, I recommend keeping the iPhone as still as possible rather than trying to follow the motion. Slow motion video exaggerates everything, including camera shake. If possible, use a pocket tripod like the one I used in the above video demo or stabilize it on a stationary object. Hold the iPhone close to your body and keep your elbows braced against your torso if you don’t have anything to stabilize your iPhone 5s on.

I typically aim to capture just two to 10 seconds of action.  That translates into eight to 30 seconds of playback. I sometimes shoot longer, but trim down longer clips significantly.  Remember, slow motion video takes four times longer than normal to play back and long slow motion videos can get really repetitive and boring. For example, it might be fun to watch your kid jump up and down in for 20 seconds, but that translates into 80 seconds to watch in slow motion.

Another thing to keep in mind is to pay attention to audio when you’re shooting. I recommend staying silent as you shoot since slow motion mode slows your voice down by four times, making you sound like an angry monster. Everything sounds louder and bigger in slow motion, which means it draws attention to the details.

The first step in editing is to see what you’ve got to work with. I recommend watching your recording and keeping an eye out for the best parts of your video clips.

The first part of editing your video is setting the speed ramp. All iPhone 5s slow motion videos start off with a bit of standard speed video, then slow down to four times slower than normal, and then speed up for the final second or so by default. You can adjust where the speed slows down and then back up by sliding the small black bars on the blue dotted line on the video.  The slow motion action should of course be right around the best part of your video. Don’t forget to leave a little bit of good video on both sides of the action you want to slow down.

Next, grab the black bars with the left arrow to set a start point. Then grab the black bar with the arrow in the right side of the display and select your end point. Tap ‘Trim’ If you’re absolutely sure that you won’t need the portion of the video you’re cutting, then go ahead and select ‘Trim Original.’ Otherwise, I recommend tapping ‘Save as New Clip’ to preserve the original in case you want to start your edits all over again.

How to Share Slow Motion Videos from the iPhone 5s

Sharing slow motion videos shot on your iPhone 5s works the same as with any other video. Just tap on the box with the arrow pointing up on the bottom of left of the video player. Tapping on any of the six icons will bring up a prompt to add a comment or title. The pop-up varies depending on which service you select. The built-in services for sharing include Messages, Mail, iCloud, YouTube, Facebook and Vimeo. All six of the service preserve the slow motion effect. If you plan on sharing the slow motion video, it’s best to do it directly from the iPhone since some apps and services don’t play well with the slow motion format. For example, Aperture, Apple’s own professional photo editing app, plays entire slow motion clips in slow motion rather than preserving the speed ramp at the beginnings and ends of clips.