The new HTC 10 is one of the most powerful smartphones available in 2016 with a lot to offer, but this quick trick can make it faster and better. Here we’ll show users how to speed up the HTC 10 in a matter of seconds simply by changing a few hidden settings.

With a nice new design, big display, fast powerful processor and 4GB of RAM this phone can nearly do it all. There are several ways to improve performance with new launchers, custom software, rooting and other technical things, but our trick is real simple. In fact, all it takes is a few changes in settings. No special skills, knowledge or rooting is required. It’s nothing new, but something many average owners don’t know.

Read: How to Add Always On Display to HTC 10

Anyone can do this. Whether the HTC 10 is your first Android phone, or you’re a seasoned Android expert. It takes less than one minute and the difference can be very noticeable. We’ll be changing three settings, and below is a video showing which ones, where, and explaining what it does. Our video uses an old Galaxy S4 with an outdated version of stock Android, but the steps are all the same.

This little trick works great on the HTC 10, and basically any Android smartphone or tablet for that matter. It’s a setting that has been hidden in Android for years, and many don’t know it exists because the menu is hidden. We have to enable the menu, find the settings, and change them.

We’ll start by unlocking a hidden developers menu in settings then change three settings that speeds up animation effects and transitions. Those pretty zooming and fading effects while going from app to app. Or while swiping things away. They look nice, but slow things down.

The first step is gaining access to a hidden developer option in settings on the HTC 10. It isn’t where it usually is like the video, but we have screenshots below to help users find it.

Owners will need to start by pulling down the notification bar and selecting the gear-shaped settings button. Once in settings navigate to the last panel titled “System” and select “About”. Then where it says “Software information” tap that and select “More”. Next we need to tap on “Build number” seven (7) times. This will enable the hidden developer menu of settings, which is where we change a few things and speed up the HTC 10. 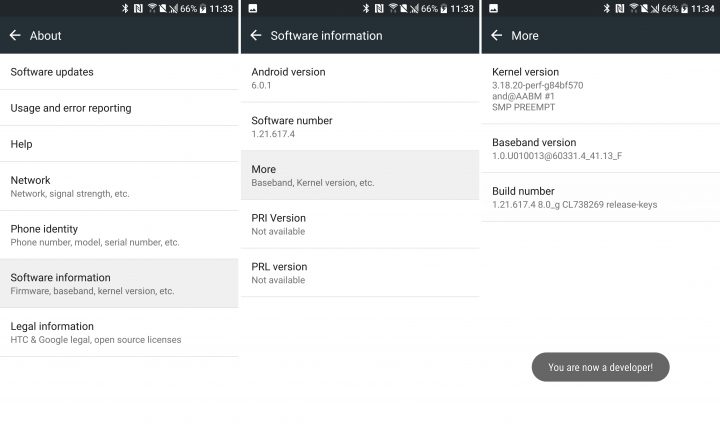 Above is an image of these settings, where they’re located, and what it looks like. After tapping build number a few times users will see a prompt, then another once they’re done.

With the developer menu unlocked we’ll need to navigate there and change three quick settings about halfway down the screen to speed up any Android device. Follow the video above, or the screenshots below as once again HTC moved it slightly.

Head to Settings > Developer Options > Advanced and Scroll down a little more than halfway to Window Animation Scale, Transition Animation Scale, and Animator Duration Scale. These are all set to 1x. Turning these values up (higher numbers) you’ll see animations and screen transitions get slower, we’re turning it down so things are faster. 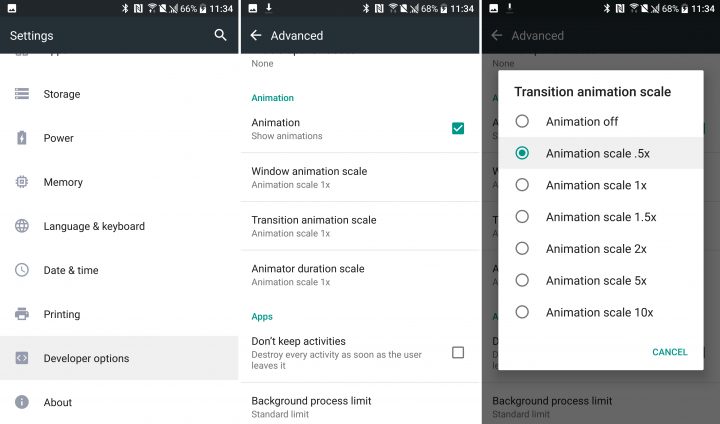 Now just change all three of those settings shown above and from the video down from 1.0x to 0.5x value. Now when users open apps, swipe through screens, or do anything all the animations and effects will be cut in half, and twice as fast. The phone will instantly feel almost twice as fast, and that’s because everything is swiping, flowing, or opening faster and with less pretty animations.

With Android 5.1 or Android 6.0 Marshmallow Google and manufacturers have added lots of animations or effects to opening apps or windows. Everything from pulling down the notification bar to swiping away apps has little effects.

Windows fade away slowly as they’re swiped, apps open from a corner and expand to cover the entire screen with animations and effects that all look neat but take extra time, and battery life. Turning the settings above down to 0.5x make them all twice as fast, and could even save battery life. These animations won’t be as visibly noticeable, but they are still there.

Some users may want to turn them off completely, which many do, and that’s an option as well if you’d like. It won’t hurt anything, but might not feel as smooth and fluid as before.

It’s recommended that users restart the device after changing these settings to make sure it is applied throughout the system. Try it today and enjoy a faster HTC 10. If it seems too fast, stutters, or you don’t like the changes simple revert back to 1x using the same steps mentioned above. Enjoy!