The LG G5 is one of the fastest and most powerful Android smartphones available in 2016, but we can quickly make it a little faster. Some love the design, others hate it, but we all can agree that it’s one fast and capable device. That said, here we’ll be showing owners how to make it even faster.

Smartphones these days are very powerful, like handheld computers with 4GB of RAM, powerful quad or 8-core processors and screens with higher resolutions than most HDTVs. And while the LG G5 is probably fast enough for most owners, there’s always a few that want to squeeze out more performance.

There are several ways to improve performance with new launchers, custom software or even rooting a device, but our trick is extremely quick and simple. Everyone can do it in a matter of seconds, and see instant results. This actually works on all Android devices, and below is a video explaining this trick, and a few additional details for owners.

The video above uses an old Galaxy S4 with an old version of stock Android, but the steps are all the same. This same trick can be done on the new LG G5 running the latest Android 6.0 Marshmallow, or any Android smartphone or tablet. It’s quick, simple, easy, and is worth the trouble.

To speed up the LG G5 and make it even faster we’ll be changing a few settings and doing a simple trick that has been around in Android for a long time. It’s nothing new, but still works as good now as it did in 2014.

We’ll start by unlocking a hidden developers menu in settings and changing three settings that speeds up animation effects and transitions. Those pretty swipe, zooming and fading effects users see while going from app to app.

The first step is gaining access to a hidden developer option menu in settings on the LG G5, or whatever device is being changed. The video above explains how and the link below is a bit more detailed as well. Or, just keep on reading.

Owners will need to start by pulling down the notification bar and selecting the gear-shaped settings button. Once in settings navigate to the last panel titled “System” and select “About Device”. Then where it says “Build Number” tap that box seven (7) times. This will enable the hidden developer menu of settings, which is where we change a few things and speed up your LG G5.

With the developer menu now unlocked we’ll need to navigate to it and change three quick settings about halfway down the screen. Follow the video above, or the screenshots below.

Head to Settings > Developer Options > and Scroll down a little more than halfway to Window Animation Scale, Transition Animation Scale, and Animator Duration Scale. These are all set to 1x. Turning these values up (higher numbers) you’ll see animations and screen transitions get extremely slow, that’s not what we want. Owners can try it just for fun, but we’re actually turning them down, or off completely. 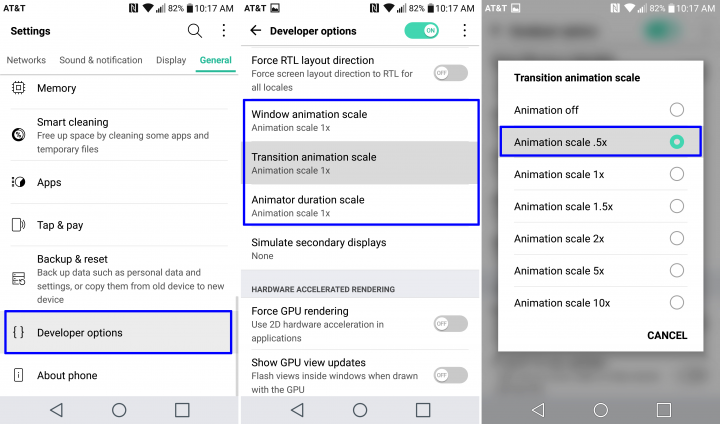 Like in the video, simply change all three of those settings in the blue box above down from 1x to 0.5x value. Now when users open apps, swipe through screens, or do anything all the animations and effects will be cut in half, and twice as fast. The phone will instantly feel almost twice as fast, and that’s because everything is swiping, flowing, or opening faster and with less animations.

With Android manufacturers add a lot of animations or effects to opening apps or windows. Everything fades away, pops open with neat looking effects and more. Even swiping between screens on the LG G5 user will see that neat bounce-back animation when landing on a screen. These neat animations make Android look great and feel smooth, but it feels faster when we speed everything up.

Turning the settings above down to 0.5x make everything twice as fast, and could even save battery life. Keeping these three settings at .5x keeps the G5 looking pretty and fancy, without making it slow. Some users may want to turn them off completely, which many do, and that’s completely ok too. However then none of these effects will be visual, and it will be so fast it almost seems to stutter. So do what’s right for you.

It’s recommended that users restart the device after changing the settings to make sure it is applied throughout the system. Try it today and enjoy a faster device. If it seems too fast, stutters, or you don’t like the changes simple revert back to 1x using the same steps mentioned above. Enjoy!