Some people own two smart phones or tablets and want to swap SIMS so they easily trade phone numbers on the phone, or share one wireless account between two tablets. To do this the two Phones one must share the same size SIM card. In our case, we share between the iPhone 5 and Samsung Galaxy S4, which use two different size cards. We’ll show users how to swap iPhone nano-SIMs with other smartphones.

To swap an iPhone nano-SIM with another phone, like the iPhone 5 and Samsung Galaxy S4, users need an adapter and an SIM cutter. The adapter makes it possible to put a smaller SIM into a phone using a larger SIM. The SIM cutter cuts the larger SIM card so it fits into a phone using a smaller SIM. Theoretically, the user can manually cut the larger SIM, but we recommend getting a cheap metal cutter, like one we found on Amazon ($7). Consider getting the adapters we found on Amazon ($2) seen below. 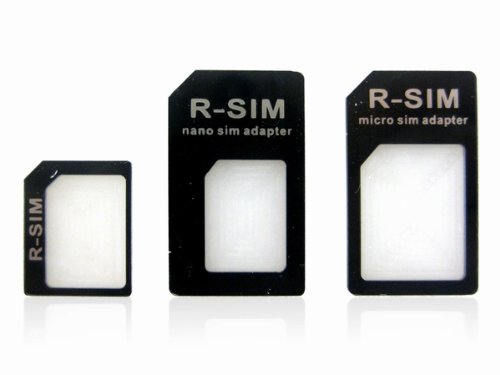 Why swap SIMs like this? It lets users share a single wireless account between two devices, even if they include incompatible SIM slots. It also lets users trade phones repeatedly without contacting their wireless carrier.

Remove the SIM Cards from Phones 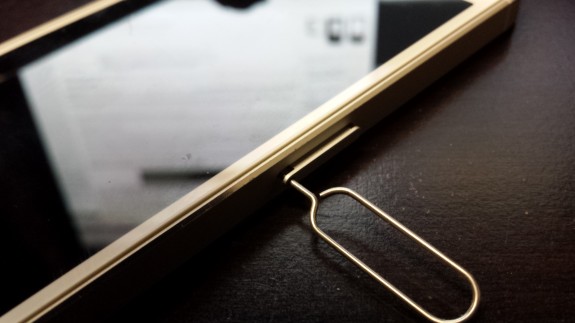 First, use a SIM tool or strong paper clip to pop the SIM tray out of the iPad or iPhone. For people who own Android devices, the SIM usually hides under the back cover, which pries off with a fingernail or a small screwdriver. On our Samsung Galaxy S4 we must pop off the back and remove the battery.

Push on the SIM and springs will help it pop out. Pull it out with fingers, a small tweezer or pliers.

Put the nano-SIM in the adapter that fits the phone with the larger SIM slot and slide it into place. The SIM is keyed so it only fits one way. If necessary, put the battery and cover back on the phone and restart the phone. It should pick up the wireless signal add the phone number previously assigned to the iPhone.

Putting the larger SIM into the iPhone 5, iPad mini or newer iPad requires cutting the SIM. 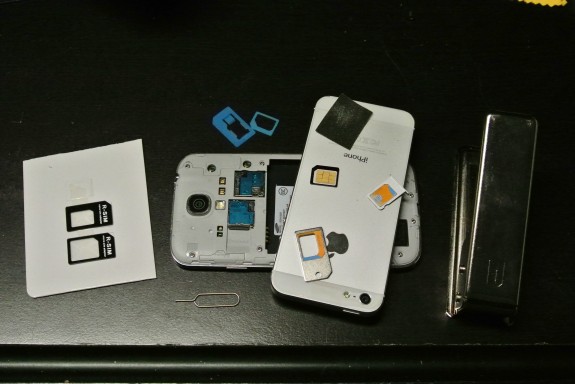 In the above image there’s …

It’s time to cut the larger SIM. The metal cutter comes with a metal adapter that holds the micro-SIM. Put the SIM in the adapter and slide the adapter into the front of the cutter. Rest the cutter on a hard flat surface and press on the arm till it makes a crack or pop sound. This takes some force. The card should drop underneath the cutter. Sand off the edges with the included sandpaper until it fits perfectly into the iPhone 5 tray.

For users of a standard SIM, don’t use the metal tray that comes with the cutter. Slide the standard SIM into the cutter and press till it cuts.

Slide the iPhone 5 tray into the side of the phone with the newly cut SIM in it till its flush with the edges of the phone. The card is keyed so it only fits one way.

Start the phone, if its turned off. It should recognize the SIM and give the iPhone the number of the other phone.

Test the phones by calling one with the other. If they work, the process is complete.