Android Wear owners can now take photos with Google Camera installed on any Android smartphone running Android 4.3 or later by speaking to their watch. We’ll show you how to take a picture with an Android Wear smart watch and your Android phone using the Google Camera app.

Many phones come with Google Camera already installed, but others don’t, so first install it from the Google Play Store. The Google Camera app is key, since it doesn’t work yet with other camera apps.

Google did a nice job with their camera app, so it’s a good idea to install it anyways. It uses a simple user interface and offers Lens Blur, which mimics taking pictures with a shallow depth of field like one can do on a more advanced camera. The background looks blurry making the viewer focus on the subject like they would in portraits or product shots. There’s also a nice photo sphere feature that takes a 360 degree immersive shot of a whole room. 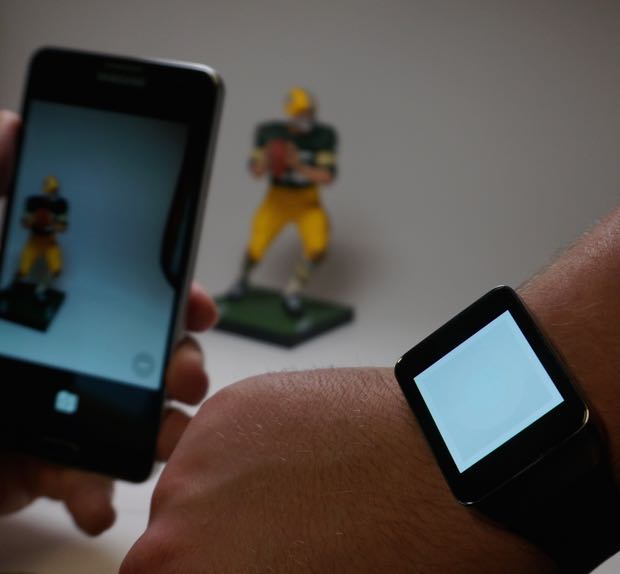 Android Wear users must connect their phone to their watch to make it work. Owners of the Samsung Gear Live, the LG G Watch or future Android Wear watches like the upcoming Moto 360 should take this step first. It’s as simple as installing the Android Wear app. Then follow the app instructions to connect the watch via Bluetooth from inside the app.

With the Google Camera app installed and the Android Wear watch connected to the phone, the user only needs to fire up the Camera to make this work. A notification card like the one below will show up. 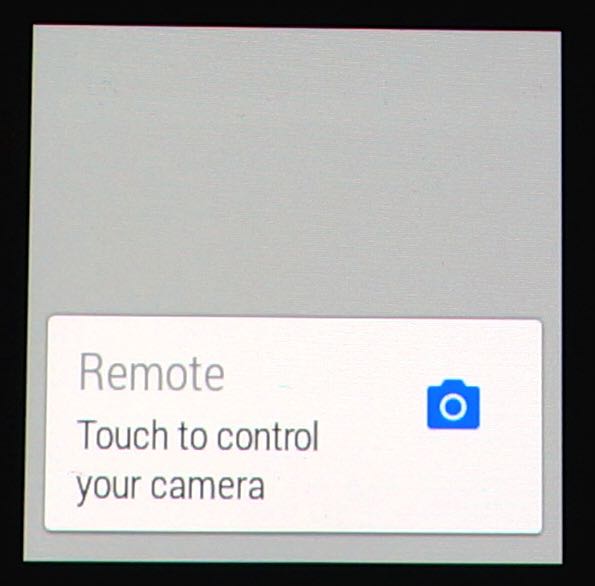 This notification will show up at the bottom of the Android Wear screen when the Google Camera app launches. 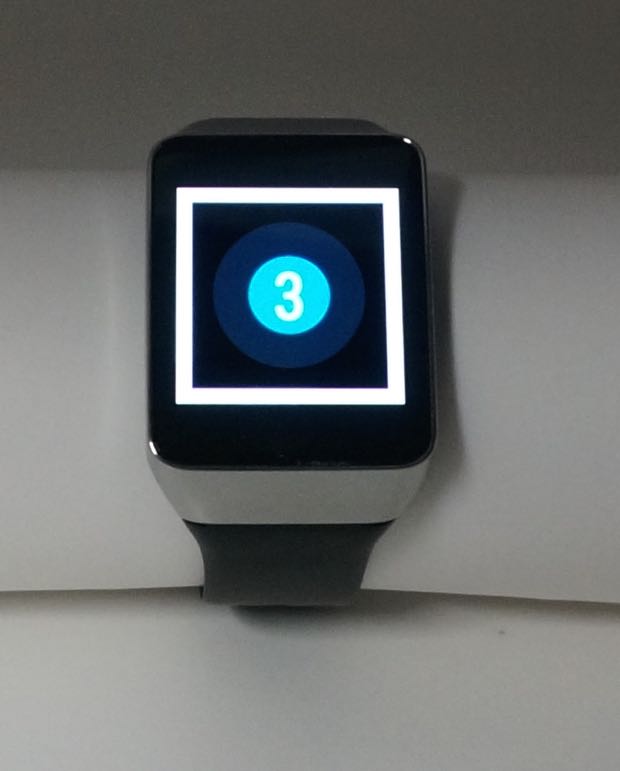 Tap the notification card and the watch shows a blue circle that will act as a shutter release for the Google Camera running on the smartphone. Tap on the circle and a 3-second countdown begins, letting the user prepare the phone’s camera if she hasn’t already. When the Android War watch finishes the countdown, it will send a signal to fire the camera’s shutter release on the phone. The phone takes a photo and sends a thumbnail back to the watch so the photographer can see a preview of their shot. 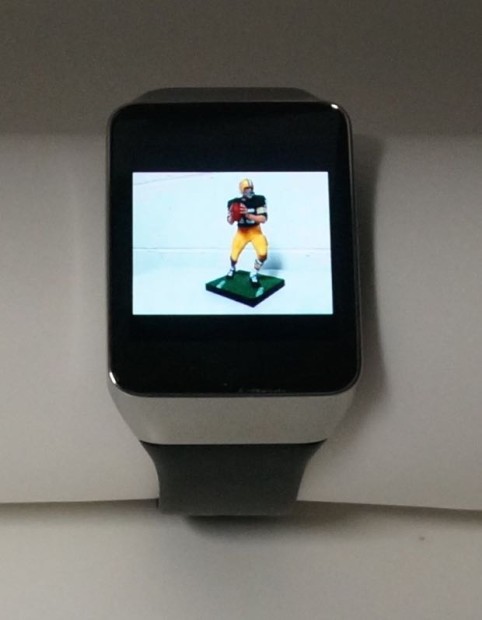 The Google Camera app will send a thumbnail of the photo back to the watch.

The process isn’t perfect. First, after a person taps the blue shutter button the phone, there’s a delay before the countdown begins. There’s another lag after the countdown ends before the phone takes the shot. It can take awhile, making the user think it failed. Be patient, because it didn’t fail to eventually snap a photo in tests.

After the thumbnail of the photo appears on the watch screen, the user can swipe right to get rid of it. This helps when the person doesn’t want to wait for it to disappear before taking another shot. Swiping resulted in a long stall halfway through the swipe motion that lasted a few seconds. See the photo below. 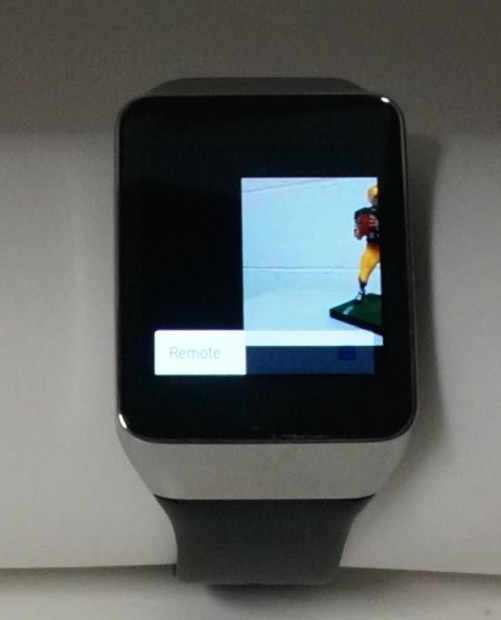 Swiping away the photo thumbnail took a few seconds because the swipe action stalled.

The lag after the countdown and the stall during the swiping action took place on the Samsung Gear Live Android Wear smart watch. We didn’t test with the LG G Watch.

This problem won’t stop users from taking pictures, but hopefully Google will update things to speed up the performance.

Why Use an Android Wear Watch as a Remote Control

Why would someone want to control the Google Camera App from their Android Wear smart watch? We can think of a few reasons. 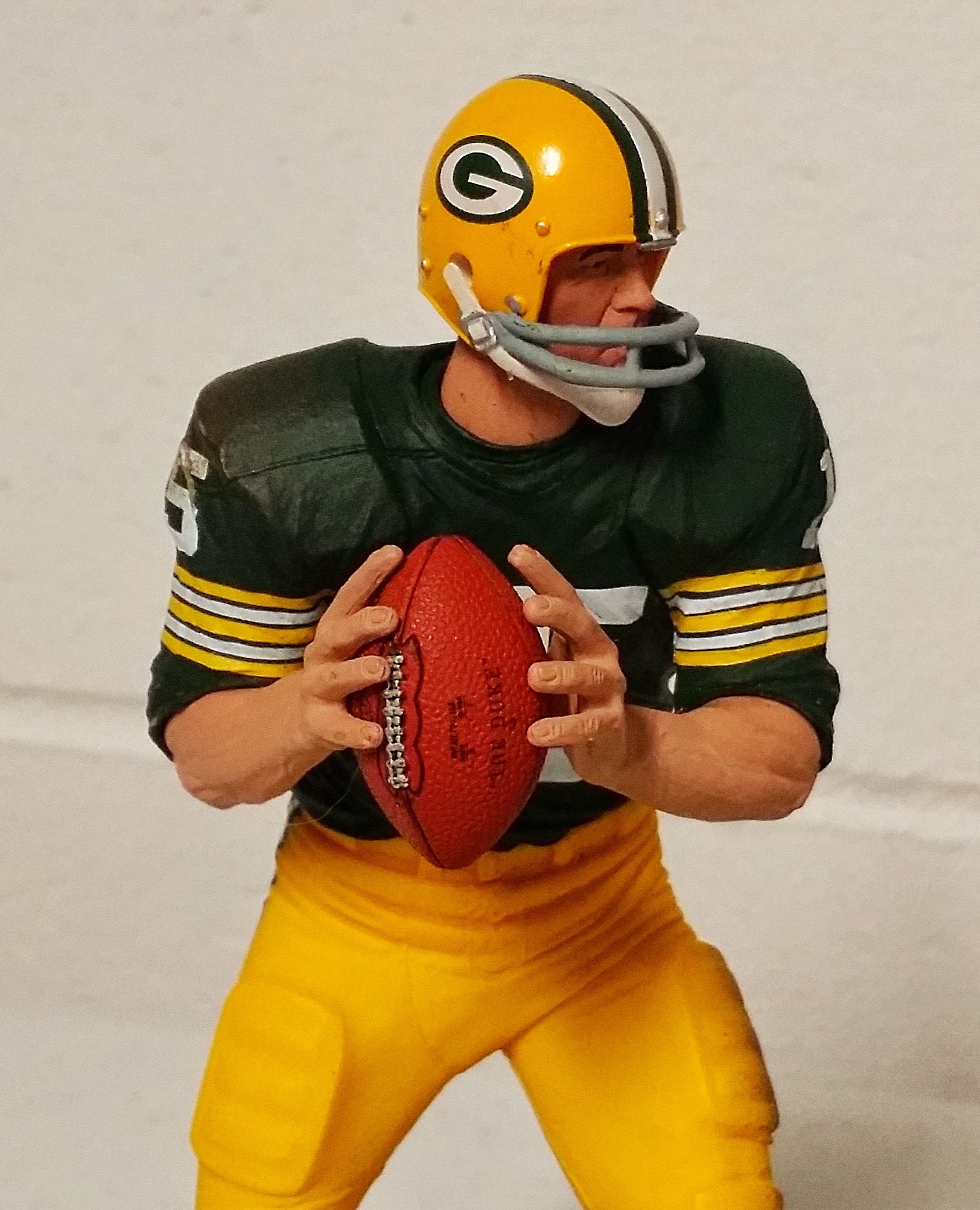 Android Wear watches can only control the Google Camera in Camera mode. The first three in the list above make sense, because the user must move the camera in some way during the process. Photo Sphere moves in all directions. Panoramas mean panning from side to side. Even Lens Blur shots force the user to move the camera upwards so the camera can tell what part of the scene is close and what’s in the background.

There’s no obvious reason the shutter control on the watch shouldn’t start a video recording. That would make taking videos of a remote scene easier. We could see a person shooting a podcast of themselves and using the watch to start the video recording. This offers another reason for Google to improve this setup, along with getting rid of the lag.