One is easy, especially for former iPhone or iPad users. The other is so hard I don’t bother. Let me show you how to do both, for when you really need each of them.

Why would anyone want to take a screenshot? If a user needs to write a how to guide for other people on the web or at their company, for app documentation, or to show off the home screen setup to friends, then the user will want to get an image of the screen. Sometimes I take a screenshot of a webpage to remind me to go back and check out the site. It’s a kind of visual bookmark.

A user can take screenshots on the Samsung Galaxy S III one of two ways.

The easy way is to press the home button and the power button at the same time.

If done properly, a white line flashes across the screen like the phone’s doing a photocopy and the screenshot saves in a Screenshots folder inside the Pictures folder on the internal SD card. Use the My Files app or some other file explorer app to find the file. Gallery will also let you find the screenshot.

The phone also supports a gesture screenshot activation, which is tough to use. I kept accidentally opening apps or pulling down the notifications menu each time I attempted it, but with practice it might appeal to some users. 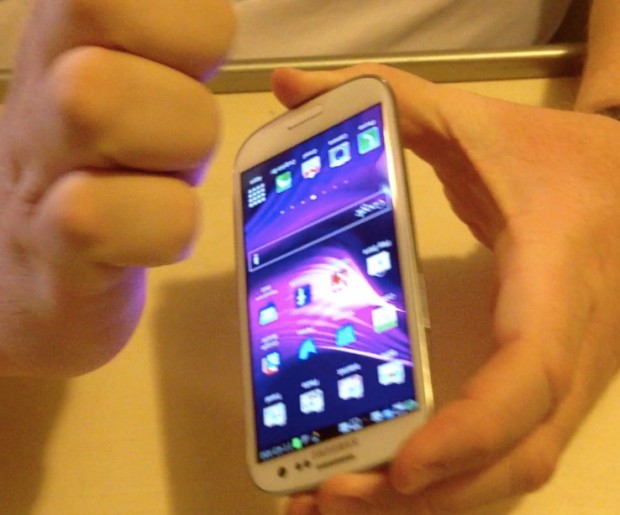 Hold the phone so that your palm covers the entire screen from top to bottom on the right side of the display.

Make a fist and arch the wrist back at an uncomfortable angle. This helps make it easier to get right.

Slide the palm from right to left across the screen quickly being careful not to touch the screen until ready to swipe it.

The screenshots go to the same folder as with the simple method.