How to Turn Off 4G LTE on the iPhone 5

The iPhone 5 ships with 4G LTE, a new faster data connection, but in addition to using up limited data plans faster, this new technology uses the iPhone 5 battery quicker than 3G.

Apple claims the iPhone 5 battery lasts as long browsing the web on 4G LTE as it does on 3G, but some users will want to turn off 4G LTE just the same.

Users that don’t live in 4G LTE coverage or those that live on the edge of 4G LTE coverage may want to keep the iPhone from switching connections or trying to use a low 4G LTE signal when there is stronger 3G coverage.

How to Turn Off iPhone 5 4G LTE

Go to Settings on the iPhone 5 Home Screen. 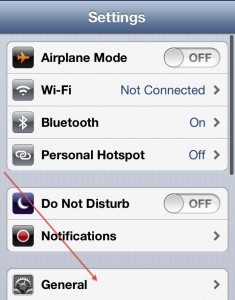 Settings on the iPhone 5. 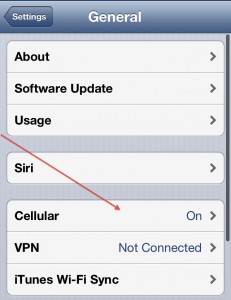 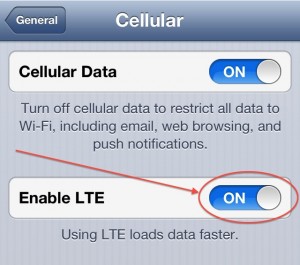 Toggle Enable LTE to Off.

To turn 4G LTE back on, simply toggle the switch to On.

This same menu offers control over what services user the iPhone data and the option to turn data completely off.

With the promise of all day battery life on 4G LTE, most users should be able to use the iPhone 5 on 4G LTE all day without the need to turn it off, but it’s nice to know where the option is if there is a reason to turn 4G LTE off.

This solution works on the Sprint, Verizon and AT&T iPhone 5 models.

Verizon offers the largest 4G LTE coverage of the U.S. carriers. AT&T is in second place and expanding. Sprint takes last place for 4G LTE coverage, but is promising to turn on Sprint 4G LTE in 100 or more cities in the coming months.

It’s easier to use data faster on 4G LTE, so Verizon users can follow these directions to check data usage on the iPhone with the My Verizon app.