Typing on a small virtual keyboard isn’t actually the quickest or easiest way to type, but here’s how to can make the most of it and type faster on the iPhone 6.

Ideally, having a full-size physical keyboard is the best setup for typing, but when you’re out on the go and only have your iPhone 6 to type out an email or a text message, you have to work with what you’re given. However, there are ways to improve that experience using a couple of tricks and changing around some settings. And if all that doesn’t work, there’s always third-party keyboards that you can try out.

Typing on the iPhone’s virtual keyboard wasn’t particularly difficult back when a 4-inch screen and even a 3.5-inch screen was the norm, but those with larger hands had some difficulties. The increase in screen size with the iPhone 6 and the iPhone 6 Plus helped make a difference, and there are other tricks that you can use to make typing easier and faster on your iPhone 6.

iOS 8 on the iPhone 6 keeps everything at the same size as on previous iPhones with smaller screens, even though the iPhone 6 has a larger display. This means that users can fit more apps onto the home screen and more text can be fit into one window.

However, if you want to take advantage of the larger display on the iPhone 6 and iPhone 6 Plus and make the keyboard larger, Apple includes a handy feature that essentially makes everything bigger on your iPhone 6’s screen, allowing you to read text more easily and get a better look at smaller images, as well as type faster.

The option for this is actually a part of the setup process, but if you accidentally chose one option over the other, you can still go back and change it in the settings. To do this, simply open the Settings app and then tap on Display & Brightness. Next, tap on View under Display Zoom. From there, you have two choices: Standard or Zoom.

Standard is essentially the default view, and it gives you the same size of icons and text as previous iPhone have. However, the new Zoom option allows you too to make everything bigger, including app icons, text and the keyboard. However, you’ll still be able to fit the same number of apps onto the home screen as the Standard view, but you won’t be able to fit as many paragraphs onto the screen using the Zoom option.

QuickType was one of the big features that Apple touted when it first revealed iOS 8 back in June of last year, and it essentially gives users the ability to type faster by learning your typing habits and suggesting possible words as you type.

QuickType vs. No QuickType

For instance, if you’re typing a particularly long word like “philosophical,” once you start typing it in, QuickType will eventually bring up the word in the area right above the keyboard. From there, you can just tap on the word to have the rest of the word automatically typed in for you.

To enable QuickType if it isn’t already, open up the Settings app and navigate to General > Keyboard. Scroll down and find where it says Predictive. Tap on the toggle switch to the right of Predictive to turn it on (it will turn green).

QuickType is great and all, but text expansion be even better. Text expansion involves typing in a short keyword and having it automatically type out a long piece of information or word that corresponds to that keyword. It’s a lot like a Harry Potter spell, where you say some magical words and then, poof, something magical happens. Except with text expansion, it’s less magical and more practical. 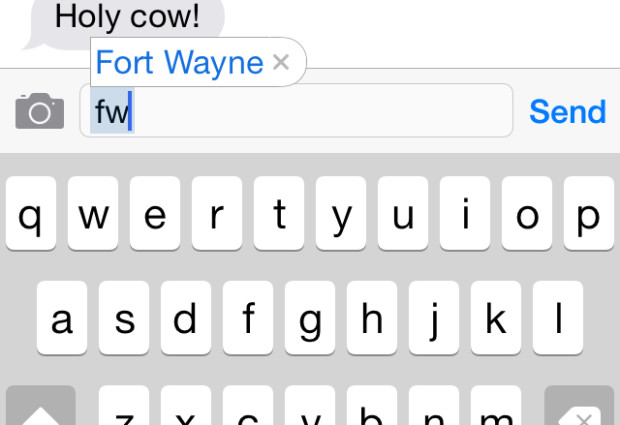 For example, I could make it so that whenever I type in “eml” on my iPhone keyboard, it’ll automatically spit out my email address in the text box, that way I don’t have to type it out manually. This saves a ton of time overall, and it’s way more convenient than having to type everything out by hand every time, especially if there’s something that you type out every day, like canned responses to emails.

Simply open up the Settings app and navigate to General > Keyboard and open up the Shortcuts section. Tap on Add New Shortcut… to start setting up phrases of your own. In the Phrase text box, type in the word or phrase that you want to pop up when you type in a short keyword or abbreviation. Then, type in that keyword or abbreviation in the Shortcut text box. Once that’s done, tap on Save in the upper-right corner and you’re done.

With the launch of iOS 8, Apple is allowing users to use third-party keyboards if they want, rather than having to be stuck with the default Apple keyboard. This is good news for those who want to be able to type faster.

We have a roundup of the best third-party keyboards for your iPhone, with SwiftKey being one of the best options on the market. SwiftKey offers better word predictions than the default keyboard with the ability to learn your typing habits over time.

There’s also a Flow option that allows you to type by swiping from key-to-key. This takes a bit of practice, but once you get it down, it’s a lot faster than traditional typing for sure.

Use Simple Tricks to Type Faster

Another way to type faster on your iPhone 6 is simply take advantage of some built-in keyboard tricks that many users may not know.

You can also do this with the Shift key when you need to capitalize a letter. Or double-tap on the Shift key to enable Caps Lock.