If you’re sick and tired of Flash, here’s how to uninstall it once and for all on your Mac.

Over the last couple of years, Flash has been known to have some pretty serious security vulnerabilities that makes it susceptible to being hacked into, essentially acting as a back door for hackers to come in and raid your computer.

In fact, just recently, Firefox has blocked Flash for running in its web browser until all of the vulnerabilities are fixed, and Mozilla’s own chief security officer even wants to set a date to officially kill Flash once and for all.

Plus, we wouldn’t be surprised if other web browsers followed in Mozilla’s footsteps.

With that said, it’s time to uninstall Flash from your computer. Don’t worry, though, as many of your favorite websites will still continue to function just fine. Most popular video streaming websites like YouTube and Netflix have switched over to HTML5 and no longer rely on Flash, making it the perfect time simply rid your Mac of Flash and make it safer overall.

Here’s how to uninstall Flash on your Mac.

Usually with Adobe products, you simply just can’t uninstall one thing and expect it all to be completely wiped from your system. There are usually some files left over and sometimes they’re hard to find or get rid of in the first place.

Luckily, the process can be really easy, thanks to a simple Flash uninstaller tool that you can download and install for free. It’s simple to use and takes only a few seconds.

It works for OS X 10.5 and newer, and you simply install it like you would with any other application. Then you can open the uninstaller and then click the Uninstall button. 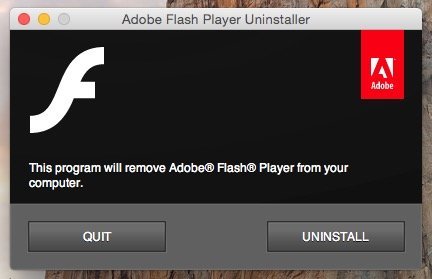 If you’re on an older version of OS X (older than OS X 10.5), then you can use this uninstaller, which works with the OS X Tiger and OS X Leopard. 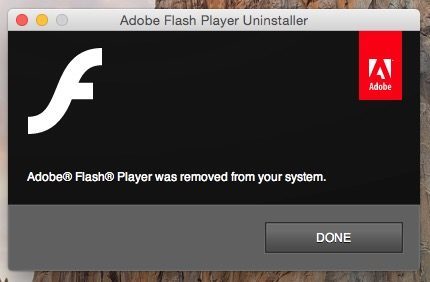 Of course, if you need Flash for work or other important situation, you can still uninstall Flash from your computer in its entirety and simply install Google Chrome, since it runs its own version of Flash within the browser.

There’s also a Flash plugin for Safari if you like to use Apple’s own web browser. Essentially, it prevents any Flash content from executing unless you give it permission to run.

Flash was once a powerhouse piece of software, with pretty much every multimedia service using Flash in some way or another. However, now that HTML5 is becoming the norm, Flash is becoming less and less popular, especially since it’s full of security holes that Adobe is usually slow to fix.

This means that you’re doing yourself a favor by uninstalling Flash, and since all of your favorite websites have weaned off of relying on Flash, you really don’t need it anymore, especially if you’re just a casual user.

Of course, Flash has been scorned upon plenty of times in the past, and even Adobe has slowly begun ending support for it little by little, most notably ending support for Flash on mobile devices back in 2011 when HTML5 was becoming popular.

Steve Jobs even shouted out his hatred for the software in 2010, so it’s certainly not a new development as far as the lack of love toward Flash in concerned, but we think the time for Flash to officially discontinue is approaching quickly.