iOS 6 delivers a new feature to the iPhone and iPad that offers users more control over notifications.

The Do Not Disturb setting allows users to block all incoming notifications to stop calls, texts and other intrusions from interrupting during a schedule or when users turn Do Not Disturb on.

After using Do Not Disturb for the past few months it is one of my favorite features, and it’s certainly prevented a few late night wake ups from noisy and bright notifications.

Because I work with people in different time zones my iPhone and my iPad light up at all hours of the night, but with Do Not Disturb I’m no longer jarred by Facebook notifications and incoming messages.

The setting is also handy when going to a movie or for ignoring the iPhone while on a date. Bottom line, Do Not Disturb is a great feature in iOS 6.

Read: Do Not Disturb for iPhone: How to Win Friends & Be Productive

How to Use Do Not Disturb

The Do Not Disturb feature in iOS 6 is quickly available as a toggle on the main screen of the iPhone Settings app, but users need to dive deeper to configure Do Not Disturb mode.

Do Not Disturb controls notifications.

When Do Not Disturb is on, there is a small moon icon in the status bar, near the clock. When users see this, the phone will not light up, make noise or vibrate while on the lock screen. The iPhone or iPad will continue to receive notifications, it just won’t notify users. 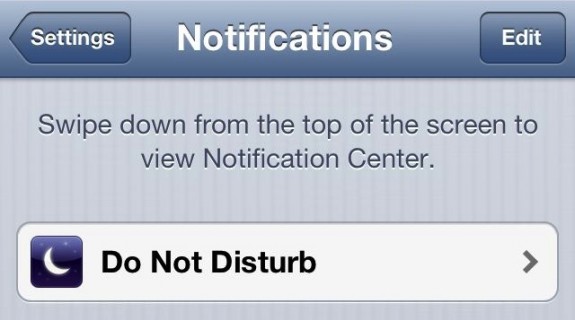 Control Do Not Disturb in iOS 6.

On this screen users can control the Do Not Disturb schedule, turning the mode on and off at specific times. The app does not offer granular control over weekend schedules, day-by-day settings or calendar integration. 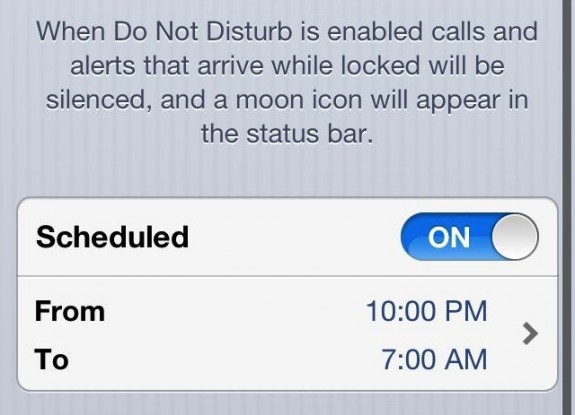 Set a schedule for Do Not Disturb.

iOS 6 lets users allow calls from specific groups. This allows users to get calls from a whitelisted group of callers. I normally set this to favorites which includes my close family and one or two others. 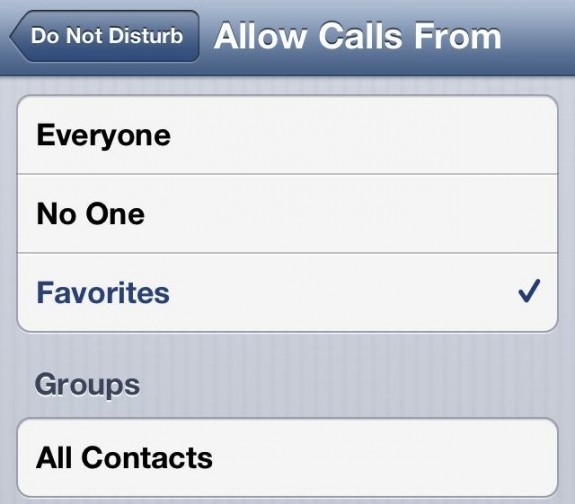 Allow some users to disturb in Do Not Disturb.

Another option is Repeated Calls. This allows users to let callers through if they call twice in three minutes. This is a nice catch all to let anyone reach you in an emergency.

What’s Missing in Do Not Disturb

Apple could take iOS 6’s Do Not Disturb mode further with a few improvements.

Finer control of scheduling would be a welcome improvement. I want to keep different weekend and weekday hours as well as integrate my calendar with the service.

If Apple offers better support for scheduling iCloud syncing of the schedule would be nice. It’s easy enough to set up the same schedule on my iPad, but I’d love to see manual Do Not Disturb mode sync across devices.

Apple should also add in better support for iMessages and texts. It would be great to allow a small group of contacts to send text messages that break the Do Not Disturb mode. Or even a safe word that breaks through Do Not Disturb.

Read: How to Use Passbook in iOS 6