Apple might have introduced Split View as a major iPad feature in iOS 9, but it wasn’t until the iPad Pro came out that it became a viable way of working on the iPad. Here’s how to use the iPad Pro split screen and run two apps at the same time.

One of the best parts of the 13-inch iPad Pro is the fact that it has that 13-inch display. Its size alone allows the iPad Pro to be used for tasks that are either impossible, or possible, but annoying, on the smaller iPads (like the 10-inch iPads Pro and Air, and the iPad Mini). A key example of this is split screen (Apple officially calls it Split View, but everyone tends to call it split screen): when the big iPad Pro is in landscape orientation, you can have two apps in side-by-side portrait mode, and both are easy to read and usable. 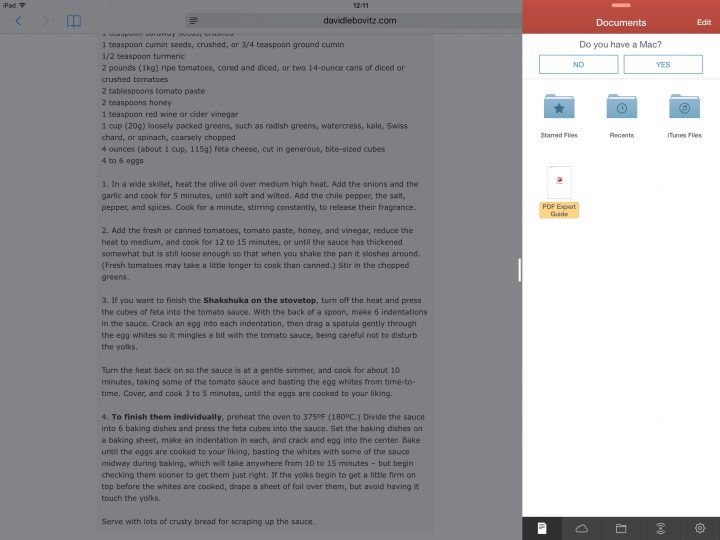 Here, we’ve used Slide Over to peek at PDF Expert 5 while Safari remains in full-screen mode.

You can use some of the split screen features on the smaller iPads, and it works, but it tends to feel pretty cramped. It works the same way on all compatible iPads, regardless of size (currently, side-by-side apps only work on the two iPad Pro tablets, the iPad Air 2, and the iPad Mini 4).

You should know that you can’t use just any app on your iPad in the split screen mode. Not only does not every app work in the split mode, but a huge number of them don’t, and probably never will. Apps have to be updated to explicitly support the new features, so if you regularly use apps that haven’t been updated in a while, you might not be able to split them up. 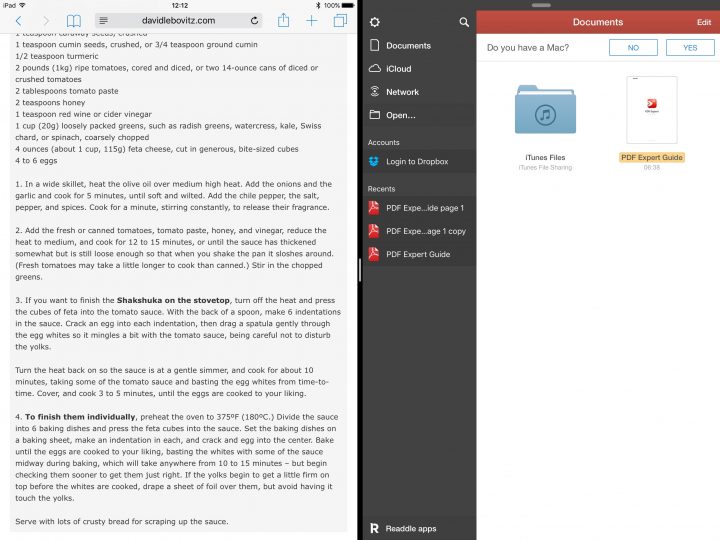 In this example, Safari and PDF Expert 5 are each taking up half of the display.

Engaging your iPad’s split screen mode is actually really simple. To start, load an app that we know works with Split View – safe bets include any of Apple’s own apps. We’ll use Safari. Tap the Safari icon and make sure your iPad Pro is in landscape (or horizontal) orientation.

Swipe in from the right edge of the display, and you’ll find an following your finger in. This kind of peeking in on an app is called Slide Over. To bring it into the full split screen mode, tap on the left border of this app and drag it to the left. You’ll see your full screen app shrink down to make room. You can leave the second app to take up just a quarter of the screen, which is the default – keep dragging it to the left, however, and you’ll find that you can have two apps each take up one-half of your screen.

How do I arrange the apps in the iPad Slide Over / split screen list?

So you’ve learned how to pull an app in from the side, but how do you pick which app appears? When you slide in, you’ll either see an app, or a list of apps. If you see an app, you can swipe down from the top of the screen (only over the secondary app) to access the list of multitasking apps. Scroll up and down this list until you find the secondary app you want, then tap the icon to bring it into focus. 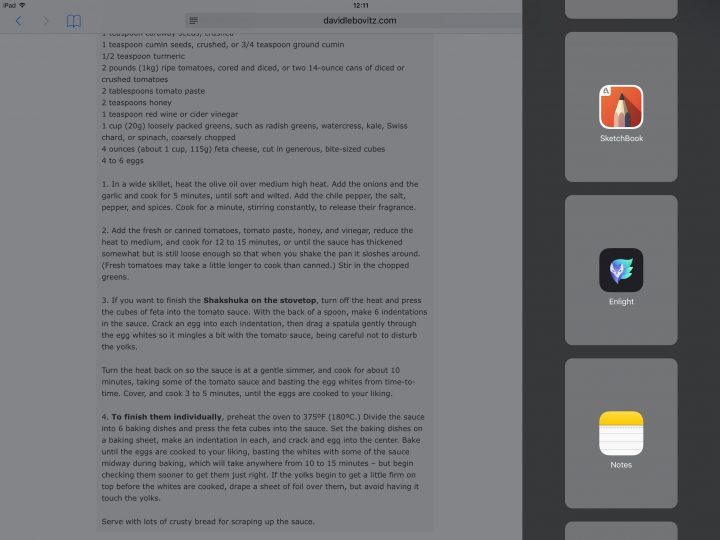 Unfortunately, Apple has decided that simplicity is the governing rule of using multiple apps on the iPad; as a result, you can’t actually choose what goes into your multitasking list. No favorites, no rearranging them, nothing. That means that you’re stuck scrolling, and scrolling, and scrolling until you find the app you’re looking for. Hopefully, with the upcoming release of iOS 10, Apple will change how this mechanism works.

Related to this issue: there’s no way to tell which apps support the split modes unless you launch them and try to show two apps at the same time; Apple doesn’t keep a list in Settings to let you know which apps work (some notable third party apps that still haven’t been updated to support the new functionality include Facebook as well as the Google Inbox app.

How do I switch out which apps are on the split screen?

There are two ways to change which apps appear on your split screen setup. If you’re content with the app on the right, and want to change which app appears on the left, just press the Home button and launch a new app. If this new app supports the Split View mode, you’ll see it appear on the left half of your display, with that secondary app back on the right half. If you choose a new app that doesn’t support using split screen modes, it’ll just fill the display.

If you want to swap out which app appears on the right half of your screen, just click and drag the app border all the way to the right edge of your iPad. This closes that second display, and from there you can re-open that list of multitasking apps by swiping left and / or down.

Should you wish to close both apps or switch to something else, press the Home button and launch your new app. You might find that you need to manually close the Split View display if you want to go back to using a single piece of software at a time.

The third multitasking feature found in iOS 9 (after Slide Over and Split View) is called Picture in Picture. This isn’t something that you set up, really, as it’s activated automatically by supported apps. If you’re watching a video on your iPad – think Netflix, Hulu, or the iOS video player – you can press the Home button while the video is playing. Instead of closing the app and returning to the Home screen like you might expect, the picture shrinks and appears in the lower-right corner. 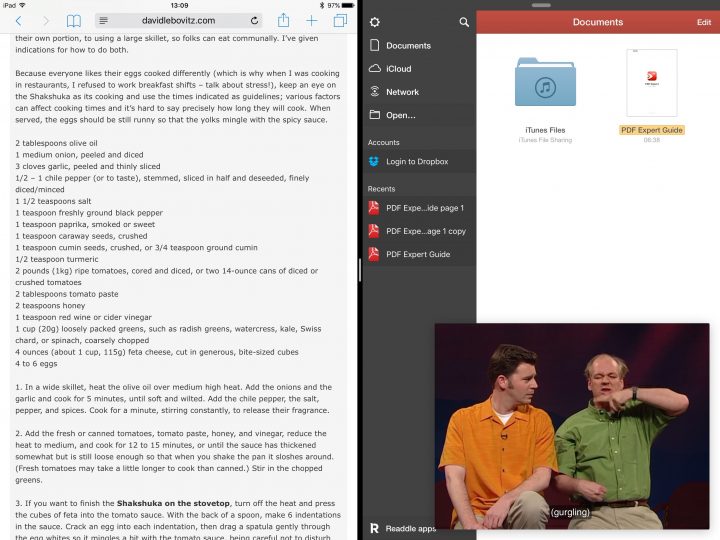 Safari and PDF Expert 5 each share the screen, but Hulu is using Picture in Picture mode.

You can pinch to zoom in and out, if you want to resize the little movie window; you can also drag it into whichever corner you’d prefer to have it stay.

Once you’re on the Home screen, launch whichever app you like, and it’ll fill your screen – but the Picture in Picture window will remain floating on top. If the new app you launch supports split screen modes, you can load up a second up so that you’ve got two apps splitting your screen and a third app playing a video in the corner.

Like the Slide Over feature, you can use Picture in Picture on either iPad Pro, the iPad Air 1 and 2, and the iPad Mini 2, 3, or 4.