Using the Personal Hotspot feature on the Apple iPad Air or iPad mini can save users money and offer a convenient connection to their iPad’s wireless data. People who don’t want to use something like a Mi-Fi or Jetpack, which offers a mobile hotspot for up to 5-10 users, can serve up a connection without carrying a second device. This helps them and their family members, friends or coworkers get online. People can share a user’s iPad data through Wi-Fi, USB or Bluetooth. We’ll explain how to get each kind of connection up and running.

The Personal Hotspot feature only works on an LTE iPad Air or iPad mini. Contact the wireless carrier and add the device to a shared data plan or as a new device on other wireless accounts. Usually this costs as little as $5 to $10 or much more, depending on which carrier a person uses. 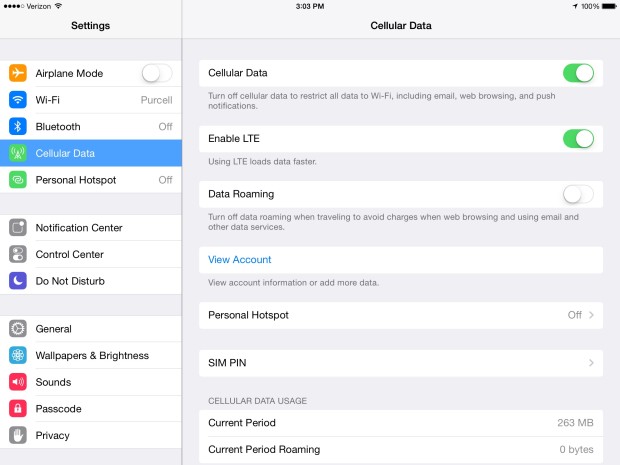 If Bluetooth’s not already on, the iPad will warn the user. Tap Turn on Bluetooth if you want to use Blueooth to make the connection between iPad and a computer. Otherwise tap Wi-Fi and USB only. 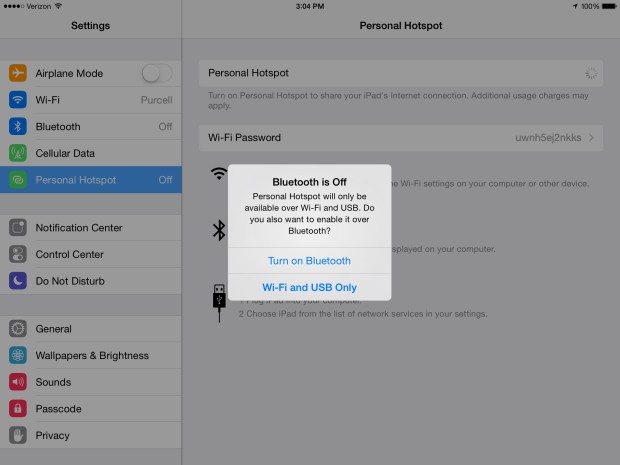 We recommend using Wi-Fi and USB only, since making a Bluetooth connection can get complicated with some devices. However, we’ll still explain how to use it below. 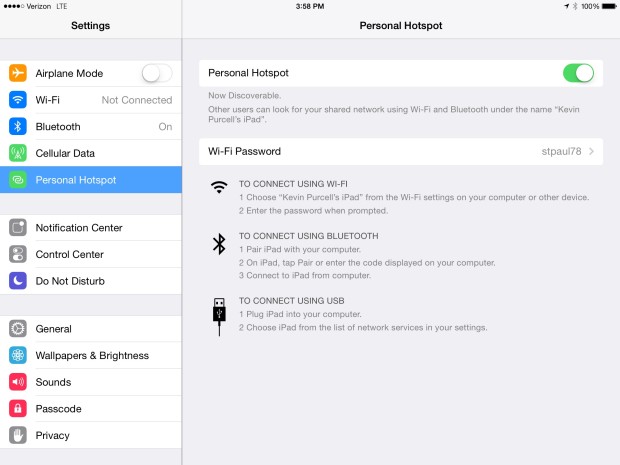 The user can keep the suggested password or change it. To change the password tap on Wi-Fi Password in the middle of the screen. Clear the current password by tapping the tiny X at the right end of the line. Now type a new password and then tap Done in the upper right corner.

The iPad gives users instructions for making the connection on the Personal Hotspot screen. See the image above. Remember the iPad’s name, usually something like User Name’s iPad by default. User’s can change this name in the General settings section. Tap General along the left and then About at the top of that screen. Now tap Name and clear out the line and type a new name. Go back to the Personal Hotspot section by tapping it along the left. Note that the name changed in the instructions.

Use the second device’s instructions for connecting to a Wi-Fi hotspot. Choose the name listed in the instructions and type in the password set in the above steps.

The second device will connect and use the iPad’s LTE connection to surf the web. Be careful about how much data you use, since nearly all wireless companies cap the amount of data a person can use per month.

The USB connection works with laptops only. Plug the iPad into a computer using a USB charging/syncing cable. Choose the iPad in the computer’s settings. This may work differently depending on the computer. On a Mac it’s easy select the iPad from the Wi-Fi icon in the menubar. See the image above. 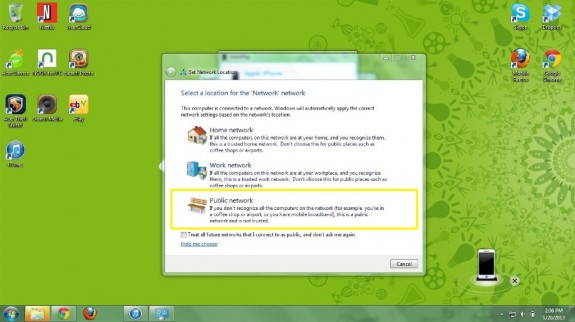 For Windows, plug in and close the Auto-Play Window. The iPad installs the drivers and Windows displays the networking dialog box. Choose Public Network and it should now work. Close the dialog box and start to surf.

If the above options don’t work, use Bluetooth to connect. Start by pairing the iPad with the computer. Follow your computer’s instructions for doing this. The iPad will likely show a box asking to pair with the computer. It may ask the user to enter a code. 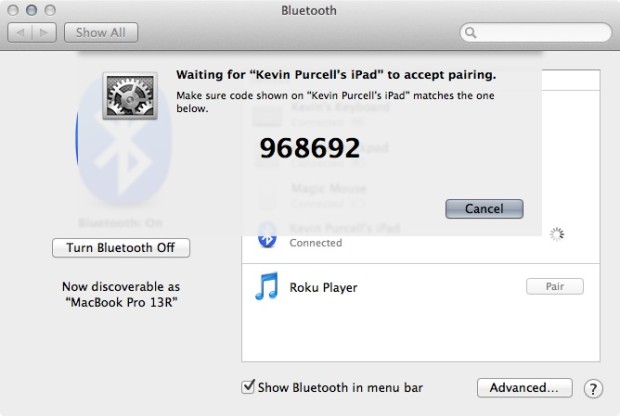 On a Mac start by clicking on the Bluetooth icon in the Menubar and chose Open Bluetooth Preferences. A box opens and shows a list of connected device in the upper part of the box and available devices in the lower part, if Bluetooth is turned on. If not, turn it on to see the list. Click on the Pair button next to the name of the iPad. A box pops up showing a code on the computer as shown above. On the iPad another box pops up with the same code. Make sure they match and tap on Pair. Now the computer can access the Internet through the iPad.

The iPad shows if any devices are connected with a blue status bar at the top of the display.