How to Use the Galaxy S5 Fingerprint Scanner

The Samsung Galaxy S5 is a flagship smartphone loaded with top-tier specs and features, it runs the latest version of Android, and even has a built-in fingerprint scanner or sensor for improved security. Just like the iPhone 5 Samsung added a fingerprint scanner to the home button, and below we’ll show you how to use it.

After months of rumors and speculation the Samsung Galaxy S5 arrived in April with a fingerprint scanner on board, following in the tracks of both Apple and HTC before them. It isn’t quite as easy to use as the iPhone 5’s, but it’s there and has an array of uses for those interested.

Fingerprint scanners and tech is fairly new to smartphones, but it’s safe to say it isn’t going anywhere. The Galaxy S5 has one, the Galaxy Note 4 will likely offer the same feature. And even the upcoming iPhone 6 and iPad Air 2 will likely both employ fingerprint sensor technology. 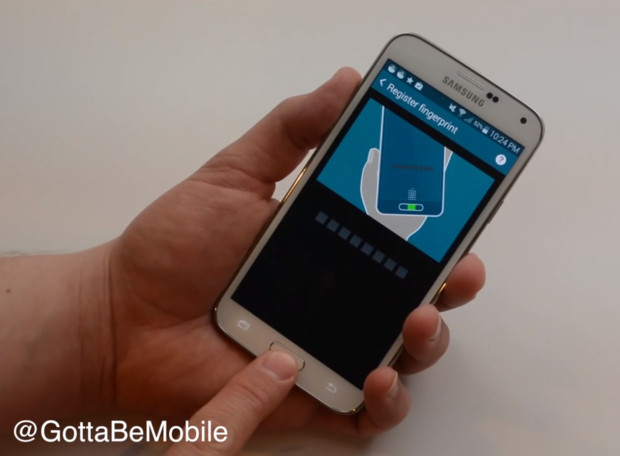 Everything from authenticating your Samsung Apps account, making payments through paypal and more can all be done on Android and your Galaxy S5 with the swipe of a finger. As long as you have it setup and configured to the right finger.

With the Galaxy S5 users can setup three different fingers. Likely a thumb, index pointer finger, and a secondary thumb for your less dominant hand. However, you can set up and save any finger you’d like. Once you set up the fingerprint scanner there’s a secondary password for added security, and users can even use it as a main layer of security on their lockscreen to keep prying eyes from their smartphone.

If you’ve been interested in trying out the Samsung Galaxy S5 fingerprint scanner technology read on for a quick set of how to instructions and an easy to understand video.

While the Galaxy S5 fingerprint scanner is rather limited for now, we’re still expecting more and more uses and apps to take advantage of it as the year continues, not to mention once the Galaxy Note 4 arrives this fall. To get started users will simply need to head into the settings menu by finding the gear-shaped settings button, and select “Finger Scanner” near the bottom of the quick settings list. 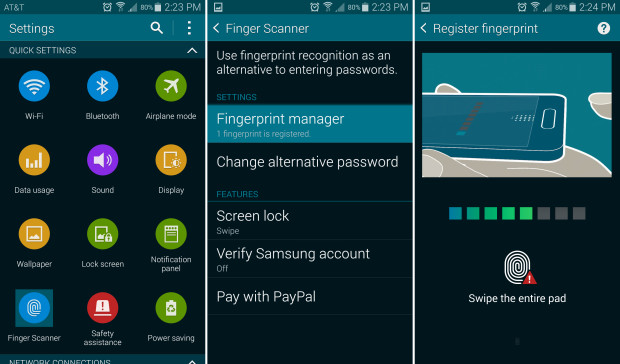 Once you’re in the Finger Scanner settings menu you’ll be able to select “fingerprint manager” to add or remove your finger of choice. To even get in and manage your saved scans you’ll need to enter a password or scan a finger. However if this is your first time, you’ll get a tutorial right from Samsung and be done in no time.

As mentioned above you’ll be able to save three fingers for usage, and setup requires 7-8 swipes to get a full and accurate reading of the finger being used. The video below will explain everything for those interested.

Galaxy S5 users will be required to setup an alternative password in case the fingerprint scanner fails, not to mention once someone tries it and receives an error five times your device will default to the alternative password screen in order to be unlocked. This dual-layer security is extremely useful, and something many owners will want to try.

As mentioned above, the new PayPal Android app allows users to instantly sign in and pay for purchases through Paypal with the swipe of a finger, so give that a try while you’re at it.

Overall there isn’t a lot to it, it’s a simple swipe to unlock method using a fingerprint scanner to identify the user. Hopefully in the future Samsung adds quick-launch apps to certain fingers for shortcuts, and gets more out of the tech inside of the Samsung Galaxy S5. For now though, enjoy the few uses and security enhancements it provides, and let us know what you think in the comments below.