The Samsung Galaxy Note 3 has tons of impressive features with a huge display and its S-Pen stylus, but another worth talking about is the camera, its flash, and using it for a dedicated flashlight in times of need.

Last week we explained how owners can use their Note 3 camera flash for alerts and notifications with calls and texts, but that isn’t all we can do with the bright LED flash on our devices. It doubles as a flashlight. Many smartphone owners use this feature, it’s extremely simply to setup, and Samsung even has a dedicated Widget for exactly this. In just a few taps you can have a one-click instant flashlight right on your phone, so read on to see how. 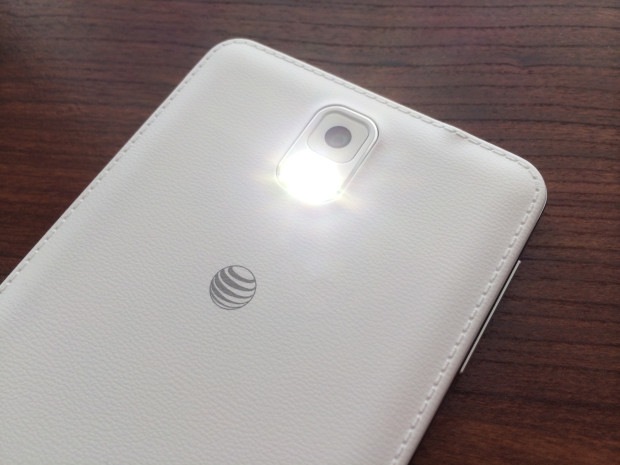 The Samsung Galaxy Note 3 has an extremely powerful LED flash that can easily double as a bright flashlight. Helpful for finding your keys under the couch or in a dark room, or even while out camping and you need a light. Most new Samsung Galaxy devices have an easy toggle to enable this in seconds, rather than launching the camera and turning it on.

It’s also much better to use the flash rather than cranking up the display brightness and using it, as the display is a huge drain on battery power. Using the efficient camera LED works wonders, and here’s how to enable it.

To use the Samsung Galaxy Note 3 camera as a flashlight owners need to add a widget to their homescreen, which is really easy. Widgets act as shortcuts or one-click solutions to instantly launch apps or services on our Android devices from the homescreen. Rather than finding the app in a list or thumbing through settings.

Head into the application tray by tapping the square button on the bottom right of the display, which launches the app tray. Select the tab near the top left labeled “widgets” instead of apps, and flip through until you find the widget shown in the images below. 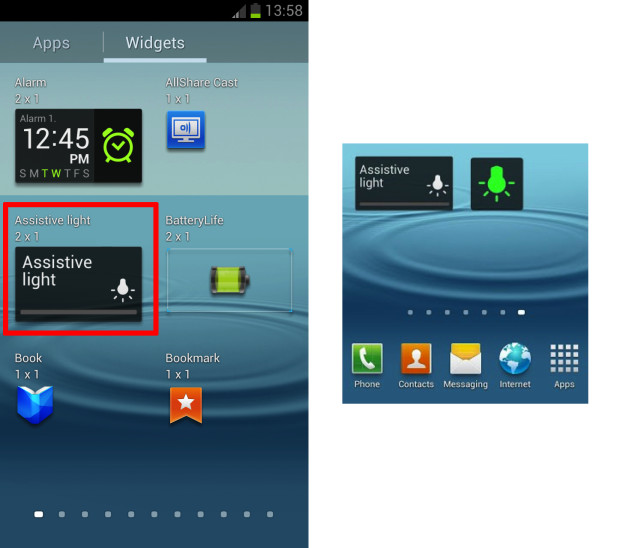 Users are looking for the “Assistive Light widget” which is made by Samsung, but it could look slightly different from the icon shown above.  There’s also hundreds of other options on the Google Play Store we’ll talk about in a moment.

Simply find and long-press the Assistive Light Widget from the selection, and slide it to the homescreen of your choice. This will add a large one-click button that instantly turns on the camera flash, which makes for an excellent flashlight no matter what the scenario is.

Then as we mentioned above, there’s tons of additional options from the Google Play Store that offer different functionality, quick shut-off timers so you won’t drain your battery, and SOS flashing for emergencies. Our favorite is Tiny Flashlight + LED which is free from the Google Play Store. Once you add this widget (same instructions as above) you’ll have tons of options to choose from aside from a camera, not to mention it’s smaller and prettier than the big square icon Samsung uses above.

Read: How to Close Apps on the Galaxy Note 3

Next time you need a flashlight or can’t see the deadbolt to unlock your front door, launch any of the apps mentioned above with a single-click widget to instantly use the Samsung Galaxy Note 3 camera as a flashlight. This can lower battery life if used excessively, so proceed with caution.